Now Reading:legalization | Trump’s War On Drugs Has Always Been A War On Immigrants 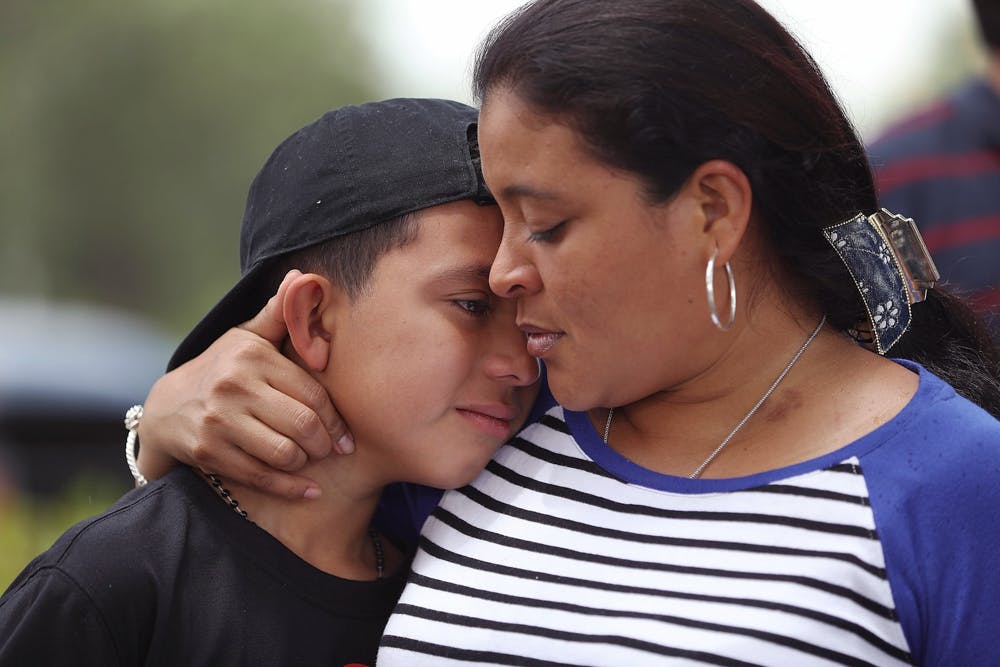 MIRAMAR, FL – MAY 19: Jenny Martinez hugs her son, William Martinez, as they talk to the media about her trip from El Salvador and her need for asylum in America because of domestic violence and her fear for her life as they join with protesters in front of the United States Citizenship and Immigration Services building on May 19, 2017 in Miramar, Florida. The protesters are asking for the Trump Administration to stop the numerous arrests of undocumented immigrants that they say have become too frequent during court appearances and when people show up to immigration offices to renew temporary permits. (Photo by Joe Raedle/Getty Images)

The War on Drugs is fueling a mass exodus of Central American refugees. Trump is feeding cartels with one hand and condemning civilians with the other.

Attorney General Jeff Sessions sent a letter to congressional leaders, followed by a memo to all federal prosecutors outlining that he intends to take a tough on crime stance and fight the opioid crisis by…going after marijuana?

Session’s long-time grudge against cannabis is baffling, so while it’s probably a lost cause to try to convince the new AG of the benefits of medical and recreational marijuana, perhaps it’s possible to educate him on the failures of the international War on Drugs.

Chiefest among its failures is the admission of the men who started it that the war was a sham.

“The Nixon campaign in 1968, and the Nixon White House after that had two enemies: the antiwar left and black people,” Nixon’s former adviser, John Ehrlichman, once told Harpers Weekly, “Did we know we were lying about the drugs? Of course, we did.”

After 50 years, U.S. drug policy still hasn’t managed to stop the staggering amounts of cocaine crossing the US border or the homicides committed in the name of fighting The War on Drugs.

In Central America alone, 15,000 people were murdered in 2017. The fear of violence is fueling a mass exodus of 200,000 Central Americans into Mexico every year according to the United Nations Refugee Agency.

What this means is that the war on drugs has a whole lot more to do with immigration than it might appear to on the surface.

“The spate of homicides is life-threatening to the average Central American. It is one key cause of migration, if not the most important triggering factor.” Says Dr. Manuel Orozco, Director of the Migration, Remittances and Development program at Inter-American Dialogue, a think tank which brings together policy experts from across the western hemisphere.

In fact, the American government already recognizes this. That’s why they work with the governments of South and Central American countries to curb the number of migrants.

Many are families just looking to escape the violence, yet support for legislation like the kind known as Kate’s Law enact stricter penalties for those who cross the border illegally, even if crossing the border was their only criminal offense.

Of course, the DEA and other American law enforcement agencies are not to blame for the violent acts of narcotraffickers, but stricter policies against drugs within the US have only resulted in greater responses from their enemies.  These conflicts have resulted in great numbers of women, children, men, and families attempting to cross the border to escape the violence and the underlying socioeconomic instability of extended conflict. This is why the President Trump’s portrayal of immigrants as “bad hombres” isn’t just racist; it’s dangerously inaccurate.

“Unfortunately the generalization has created stigmas against migrants,” says Orozco, “[It creates] uncomfortable profiling, and inaccurate portrayals of people who work to look after their families back home.”

Still, the administration appears to see nothing wrong with casting them under the same umbrella and instead takes offense to critics who recommend a different approach.

“Can you believe that I’m saying that?” Trump said to a crowd of police officers at a Long Island rally in early August. “I’m talking about liberating our towns. This is like I’d see in a movie: They’re liberating the town, like in the old Wild West, right?”

In that particular case, President Trump was referring to MS-13, one of the most dangerous criminal organizations in the world of which the majority of members are Salvadorian. But what the president doesn’t appear to acknowledge is a simple fact; MS-13 is an American born gang which arose out of an American supported war in El Salvador. Today, that gang has completely taken over that small Central American country as a result of deportations.

Meanwhile, in the United States, overall crime rates have remained stable and in a 30-year decline according to the most recent studies. There is very little evidence to suggest that marijuana drives the crime rate according to fact-checking website Snopes especially when it’s legalized and associated with legitimate businesses.

In fact, while it may seem counterintuitive to legalize the product cartels are selling, it seems to be the best alternative. According to US Border Patrol statistics the legal recreational markets in American states, where the cartels make their biggest profits, have caused a decline in the cartels’ exports to the US. Even the DEA has admitted that the quality of America’s legal recreational market has hindered its Mexican alternative with a drop in price from $100 a kilogram to $25.

“After four decades of the war on drugs, we’ve cut marijuana imports almost in half within the last two years by legalizing it” Writes Don Winslow, the author of 19 books who has followed the war on drugs for 15 years, “In essence, when we stop fighting, we win. When we keep fighting, the cartels win.”

Until we change our approach – wall or no wall – immigrants will suffer while the cartels will see the border the in the same way Winslow says they’ve seen it throughout the drug war: Siempre Verde – always green.