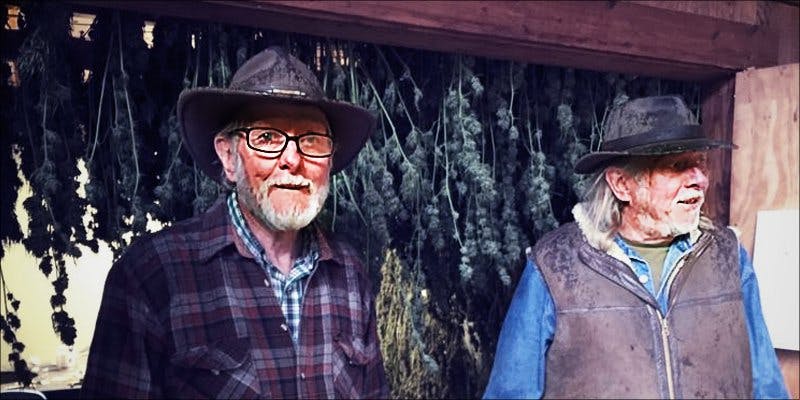 76-year-old twin brothers, John and Robert Cunnan, have been working the land, producing high-quality cannabis for medical consumers for decades.

Hidden in Round Valley, California, one of Mendocino County’s most fertile areas of land, resides 76-year-old twin brothers, John and Robert Cunnan. After moving to the remote location to provide a simpler life for their families, the brothers began cultivating cannabis as a way to earn extra income. Once they experienced the potential their plants provided, they continued to grow and never looked back. Now, though, they fear recreational legalization could affect their fragile market and end the extra income they’ve grown dependent on.

John and Robert Cunnan moved from Glendale, California more than 40 years ago. They dreamed of escaping the growing population of Southern California and finding a way to immerse themselves in laboring their own land.

The two built homes, planted gardens and provided for their families by crafting handmade cabinetry for local mom-and-pop businesses. While the brothers were happy, they wanted to find a more substantial source of income that wouldn’t take them away from the land.

After a visitor explained the financials gains he had seen from cannabis crops, Robert had an idea.

John remained a skeptic in the beginning, but after seeing what cannabis could do for his family, he quickly joined his brother in the cultivation arena.

I consider myself a teacher and a woodworker. The cannabis is just to fill in where the teaching and woodworking don’t pay the bills.

Many small cannabis farmers, like John and Robert, oppose Proposition 64, which could legalization recreational cannabis in California after the November elections.

Once legalization is passed, the cannabis industry won’t depend on local farmers. Big businesses and corporations will come in and cultivate cannabis as quickly as possible to push the goods through to the newly founded recreational market. Which is bad news for small farms.

In the same way Wal-Mart has virtually exterminated locally-owned goods stores, cannabis conglomerates will swoop down and over saturate the market, driving the price of cannabis to all-time lows and leaving little to no room for profits for grow operations like Robert and John’s.

Robert is curious to see how the new changes will play out.

The only reason I am still riding this marijuana wave is because, having worked for mom and pop for 30 years trying to help them survive, I am really curious to see how it all shakes out. I want to know whether people realize in the end that it’s much better to keep as many small farmers involved as possible because that supports families.

Currently, the brothers are legally allowed to grow up to 99 cannabis plants on their farm and sell to medical dispensaries. While this might not seem like very much production, in this area of Mendocino County, plants can produce upwards of four pounds each.

This extra income has allowed the brothers to provide a comfortable life for their families, while still remaining attached to the simple life they relocated to find from the start.

If Proposition 64 is passed, it’s likely the brothers would have to greatly change their lifestyle and make adjustments and cutbacks to fit the sudden influx of cheaper, lower quality cannabis that will be readily available.