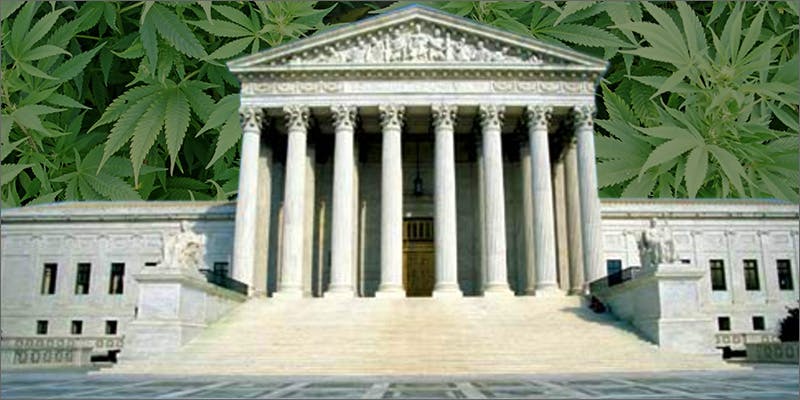 When Colorado legalized recreational cannabis in 2012, some neighboring states were furious, claiming “their sins are spilling over into our communities”.

When Colorado legalized recreational cannabis in 2012, some neighboring states were furious. They claimed “their sins are spilling over into our communities”. Nebraska and Oklahoma even went crying to mommy and filed a federal lawsuit against Colorado. That lawsuit has been thrown out.

The case said that marijuana is being across the Colorado borders into neighboring states, and tried to say that Colorado was violating federal law. The Supreme Court threw out the case, though 2 conservative justices, Thomas and Alito, say they would have heard it.

“This was a meritless lawsuit, and the court made the right decision,” Mason Tvert of the pro-legalization Marijuana Policy Project said. “States have every right to regulate the cultivation and sale of marijuana, just as Nebraska and Oklahoma have the right to maintain their failed prohibition policies.”

If this case were to actually have been heard, what would the Federal Government do to stop Colorado? Bomb it? Arrest the whole state? Replace its politicians with Federal puppets? Kick Them out of the Union? Nebraska and Oklahoma didn’t really think this through. Maybe they just want to sue for some of that cannabis tax money without earning it.

Nebraska Attorney General Doug Peterson was disappointed, but says the decision doesn’t prevent them from finding other ways to go after Colorado in federal court. If at first you don’t succeed, find another loophole.

Unfortunately for Doug, he doesn’t understand the concept that State’s rights trump Federal rights. Unless Nebraska invades and takes over Colorado, they can’t tell them what to do there. This same thought process was instrumental in starting the Civil War. Good job Nebraska.

Oklahoma Attorney General Scott Pruitt seems to have a problem with the fundamental difference between individual action and state action. The State of Colorado isn’t doing the smuggling. It is individual people.

“The fact remains – Colorado marijuana continues to flow into Oklahoma in direct violation of federal and state law, Colorado should stop refusing to take reasonable steps to prevent the flow of marijuana outside of its borders and the Obama administration should enforce federal law against marijuana,”

He must think that all those people in his state who buy pot are being abused and coerced by evil Colorado drug pushers. What Colorado allows has nothing to do with what individual people do to violate Oklahoma law. Are they trying to say they didn’t have weed there until Colorado introduced it? Before Colorado legalized, where did Oklahoma’s weed come from? Colorado, California, Mexico, it doesn’t matter. Oklahoma is blaming the failure of its own laws to deter people wanting weed on the easiest target, a state nearby that listens to its people.

Colorado Attorney General Cynthia Coffman says the legal loopholes that allow for these types of lawsuits to even be considered are because of the federal government’s lack of definitive leadership on the issue. Were Obama and Congress to decree that it is up to states officially, instead of as a footnote recommendation, this farce would not have been allowed to occur in the first place.

Obama has decided that the issue doesn’t merit his attention in his final days in office. Apparently typing out a memo is hard work. Baseball games in Cuba are much more fun.

Do you think one state should be able to tell another state what to do? Would the highest population states take control, or the ones with the most money? What makes one state and its people less important? Share your thoughts with us on social media or in the comments below.