The United Nations and the World Health Organization have finally entered the 21st Century, issuing a call for all drugs to be decriminalized. 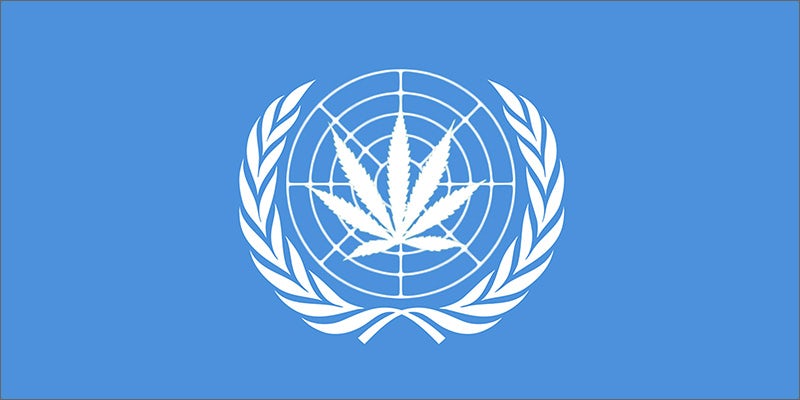 The United Nations (UN) and the World Health Organization (WHO) have finally entered the 21st Century when it comes to drug policy reform, issuing a call for all drugs to be decriminalized.

Buried deep in a joint statement on ending healthcare discrimination, the two organizations called for “reviewing and repealing punitive laws that have been proven to have negative health outcomes” by member nations.

Laws that should be repealed include “drug use or possession of drugs for personal use,” according to the release.

While the WHO had previously called for drugs to be decriminalized in the context of reducing the incidence of HIV infection, the United Nations has limited it calls to health-based and evidence-based approaches to drug use.

There is growing worldwide support for drug decriminalization – the elimination of criminal penalties for drug use and possession. Leading medical, public health and human rights groups have endorsed the approach, including the International Red Cross, the American Public Health Association, American Civil Liberties Union, the NAACP, and Latino Justice.

Despite the risks and challenges inherent in tackling this global problem, I hope and believe we are on the right path, and that together we can implement a coordinated, balanced and comprehensive approach that leads to sustainable solutions.

I know from personal experience how an approach based on prevention and treatment can yield positive results.

Guterres was the leader of Portugal back when that country decriminalized all drugs. At the same time, the country introduced more resources for drug prevention and treatment. Portugal saw drug deaths fall to one of the lowest rates in Europe, and also reduced the prevalence of HIV among those who use injectable drugs.

Public opinion on decriminalization has also been steadily increasing as the harms of criminalizing drugs become more apparent. Polls of presidential primary voters in Maine, New Hampshire, and even South Carolina found that substantial majorities in each state support ending arrests for drug use and possession.

In 2016, the first state-level decriminalization bill was introduced in Maryland and a similar version was reintroduced in 2017. Research coordinator Suchitra Rajagopalan of the Drug Policy Alliance saw the joint statement as representing progress towards the goal.

Not only does drug decriminalization drastically reduce the number of people mired in the quicksand of the criminal justice system – it also, as the UN/WHO statement highlights, vastly improve public health. It decreases the stigma against people who use drugs and addresses the discrimination they historically face.

Drug decriminalization is a rational and fiscally sound policy rooted in health and human rights. Governments throughout the U.S. and around the world have an indisputable moral and scientific imperative to pursue it.