Homicides directly tied to drug trafficking were reduced by 41 percent. 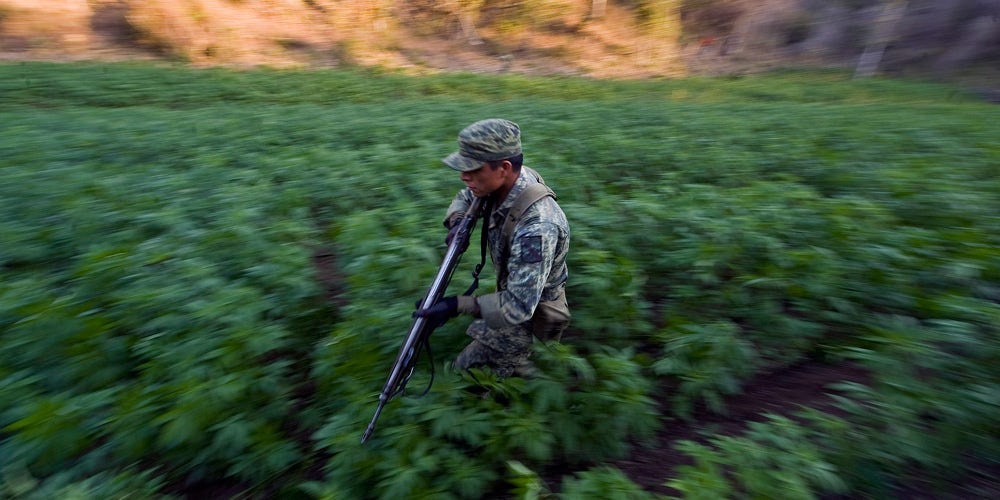 A Mexican soldier runs in a marijuana field, at Los Algodones community, in Culiacan, Sinaloa State, Mexico on January 30, 2012. Mexican soldiers found a marijuana field and incinerated the drug as part of the Culiacan-Navolato operation. More than 40.000 people have been killed in rising drug-related violence in Mexico since December 2006, when President Felipe Calderon deployed soldiers and federal police to take on organized crime. AFP PHOTO/Alfredo Estrella (Photo credit should read ALFREDO ESTRELLA/AFP/Getty Images)

Violence has significantly declined in states with medical marijuana laws that border Mexico, according to a recent study. The study, investigating the impact that U.S. marijuana legalization is having on Mexican Drug Cartels, found that violent crime fell by an average of 13% in states after they legalized medical cannabis. The researchers used data from the FBI’s crime reports and homicide records, spanning from 1994 to 2012.

One of the study’s authors, an economist named Evelina Gavrilova, explains that medical marijuana laws take power from Mexican drug traffickers by creating a nationalized supply chain that begins and ends in the United States. “These [American] growers are in direct competition with Mexican drug cartels that are smuggling the marijuana into the U.S. As a result, the cartels get much less business,” Gavrilova told The Guardian.

In Mexico, a pound of marijuana can be grown for as cheap as $75 dollars. Depending on the quality of the marijuana and where it’s sold, that pound can go for a few thousand dollars in the United States.

It’s yet to be seen how recreational marijuana might affect crime in states bordering Mexico. California, which experienced the greatest drop in violent crime as a result of medical legalization, just opened its recreational market on Jan. 1.

Get 20% off premium weed and discover the latest products, news, and deals in cannabis.
January 16, 2018 — Last Updated
Written by Rob Hoffman