Long-lost Caligula mosaic found being used as a coffee table in NYC apartment. 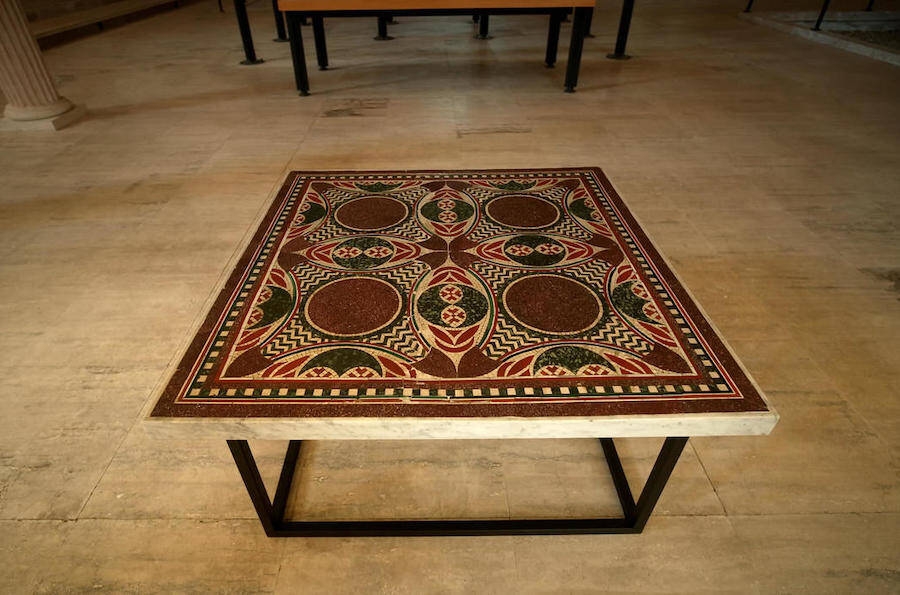 An Italian expert on ancient stone and marble, Dario Del Bufalo, was on the hunt for a priceless Roman mosaic that once decorated a ship used by emperor Caligula. Low and behold, the mosaic was being used as a coffee table in someone’s New York apartment.

Del Bufalo explained how he came across the mosaic during an interview on Sunday with CBS’s 60 Minutes. In 2013, Del Bufalo released his book, Porphyry, which included a photo of the long-lost mosaic. The piece was originally a part of the floor on a “party ship” by emperor Caligula, the same ship he was shot and killed on.

The rare mosaic was discovered in a lake near Rome in the 1930s, where it was stored in a lakeside museum until 1944, when the Nazis retreated from Italy, burning ships and other national treasures. Fast forward 70 odd years, Del Bufalo was signing copies of his book in New York City when he overheard a conversation that sparked his interest.

He told CBS about hearing a lady and a man wearing a strange hat come up to the table, where Del Bufalo overheard the man say, “Oh, Helen, look, that’s your mosaic.’ And she said, ‘Yeah, that’s my mosaic.'”

After getting the couple’s attention, Del Bufalo confirmed that the long-lost mosaic had been sitting in “Helen’s” Manhattan apartment. Helen Fioratti is an art dealer and gallery owner in the city who, during an interview with the New York Times in 2017, said she and her husband purchased the mosaic from an Italian noble family in the 1960s.

When the piece arrived in New York, they transformed it into a coffee table. Fioratti told the Times it was an “innocent purchase,” and the mosaic was their favorite piece, “we had it for 45 years.” Although we’re not sure who the Italian family is that sold Fioratti the mosaic, the Manhattan district attorney’s office suggests that it was stolen during the second world war.

The mosaic was returned to Italy after Del Bufalo’s conversation with the couple, and it’s on display at the Museum of Roman Ships in Nemi. Del Bufalo concluded that he felt terrible for stripping them of such a prized possession, but he knew the authenticity and uniqueness of the piece, which needed to be displayed in his museum in Nemi.

Del Bufalo said he plans on making a copy of the mosaic for Fioratti to keep in her apartment, adding that his “soul would feel a little better.”

December 08, 2021
Written by BuzzMusic
Save for later
Start saving articles by clicking the heart icon and you'll find them again in your profile page.

Get 20% off premium weed and discover the latest products, news, and deals in cannabis.
December 08, 2021
Written by BuzzMusic
Save for later
Start saving articles by clicking the heart icon and you'll find them again in your profile page.