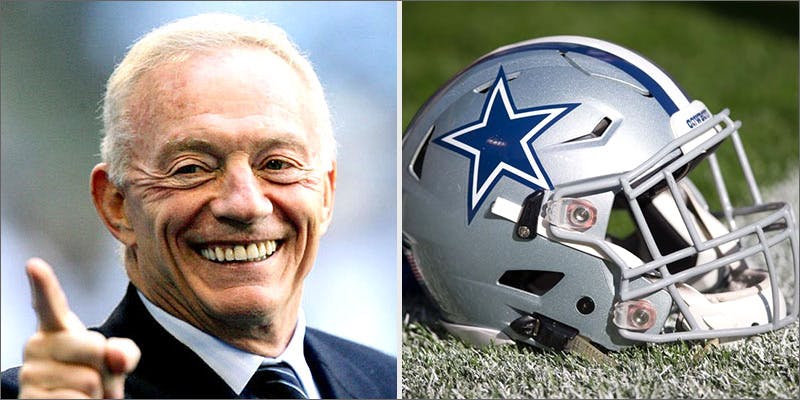 Dallas Cowboys Owner, Jerry Jones, said the NFL should end its ban on cannabis use, at last week’s owners-only meeting in Arizona.

Dallas Cowboys owner, Jerry Jones is asking the NFL to end its ban on cannabis use. It’s a move that could eliminate suspensions, fines and other penalties for marijuana consumption among players. As of 2016, players who are not in the NFL’s substance-abuse program are tested for marijuana only one time between mid-April and August. This gives many athletes the freedom to use recreational or medical weed during the off-season, as long as they quit early enough before testing begins.

The NFL’s tough stance on weed

Jones’ concerns regarding cannabis and investigations are understandable; he has seen players like Rolando McClain, Demarcus Lawrence, and Randy Gregory lost in recent years to suspensions under the substance-abuse policy

The NFL’s cannabis testing threshold has traditionally been stricter than in other major sports. In 2015, the NFL relaxed its policies by raising its positive cannabis threshold from 15 nanograms per milliliter to 35.

While it’s a start, the threshold for major league baseball stands at 50 nanograms per milliliter and the World Anti-Doping Agency (which tests Olympic athletes) has a threshold of 150 nanograms.

Former Pro Bowl running back, Ricky Williams faced two suspensions in his career and was subjected to the organization’s substance-abuse program due to his marijuana use. He feels that the NFL’s strict threshold back then was unfair,

If that [35 nanograms] was the threshold when I was in the NFL, I never would have been in the drug program.

Understandably, the NFL seeks to avoid potential impairment problems while players are on the field. Yet, alcohol nor prescription drug testing procedures are regularly administered.

This fact leaves Williams to question the league’s rationale,

I think if you ask the NFL, they’d say the drug program is for our safety. But I think it’s more to protect the image of the league.

In order for the NFL to end its prohibition of cannabis, the league and the NFL Players’ Association (NFLPA) must come to an agreement. The players themselves would have to initiate the discussion, gather their research and organize.

Fortunately, the NFLPA announced in January that changing the NFL’s marijuana policy is on the table, which could mean that a fairer agreement may come sooner rather than later.

Their possible change of heart might be due to the NFL’s new pain management committee and their ongoing research regarding marijuana’s role in pain relief, sleeplessness and other conditions brought on by the sport.

Prescription drugs are a problem for the NFL

New revelations about rampant opioid use among NFL players isn’t hurting the cause either. A recent Washington Post article claims that the NFL has,

These findings have put the league in hot water with the Drug Enforcement Association (DEA) for what is being called “a disregard of federal laws.”

Former players, including the executive director of the NFLPA DeMaurice Smith, believe that “cannabis can also help players in a medicinal capacity, and help reduce the use of prescription painkillers.”

As medical and recreational cannabis continues to be legalized across the country, let’s hope that the opinions of Jerry Jones, Ricky Williams, and many former NFL players will help to bring about more reasonable drug policies within the organization.