Now Reading:sports | Kathy Bates Told Conan That NFL Players Should Be Able To Use Medical Cannabis 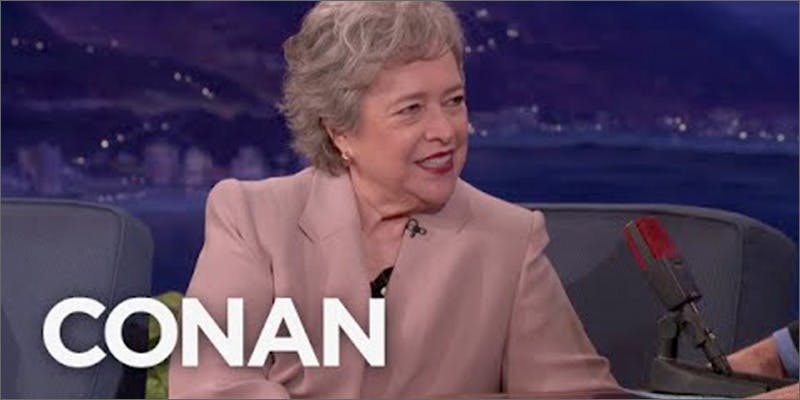 While appearing on “Conan” to promote her new Netflix weed sitcom, Kathy Bates also took some time to advocate the use of weed in professional sports.

While appearing on “Conan” to promote her new Netflix weed sitcom, “Disjointed,” Kathy Bates also took some time to advocate the use of weed in professional sports.

With the launch of Disjointed, the new weed-centric sitcom on Netflix, Kathy Bates appeared on Conan, where she not only spoke about the research that went into developing her character but also the use of weed in professional sports.

In Disjointed, Bates plays the owner of a medical cannabis dispensary, which required her to do some more “character research” backstage before her interview with Conan. When asked her about her character, the Oscar-winning actress said, “She’s Ruth Whitefeather Feldstone – no, Ruth Whitefeather Feldman,” adding that she’s “gotta get this right.”

But it wasn’t all laughs and promotion, as Bates got serious, when she talked about the Gridiron Cannabis Foundation. The foundation focuses on advancing the research of medical cannabis, which will allow NFL players to use an alternative way to treat injuries, including concussions and chronic pain.

When speaking about the subject, Bates said,

[T]hese guys belong to this foundation, and they’ve gotten off of the pharmaceuticals for their brain injuries, and they’ve actually gone on to cannabis and it’s really helped them a lot.

Although, she did add a disclaimer, too, saying she is not an expert. “I’ve only done research for my character, and it’s not for everybody, so I want to just say that.”