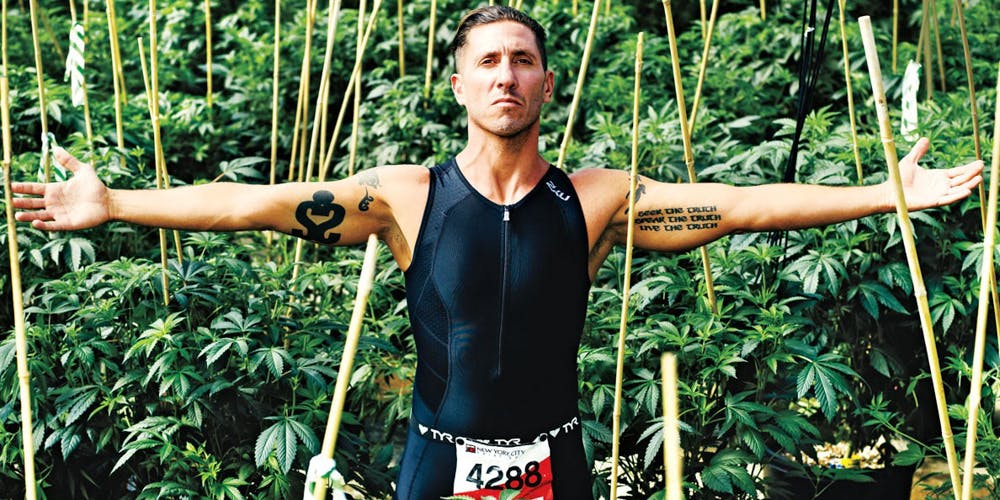 Michael Phelps did it. Ricky Williams did it. So did Kareem Abdul-Jabbar and Allen Iverson. Maybe it’s time that the couch-locked stoner stereotype finally died.

Michael Phelps did it. Ricky Williams did it. So did Kareem Abdul-Jabbar and Allen Iverson. There’s no shortage of sports stars who like to wind down with some weed, and who can blame them? Intensive training sessions and endless series of games and matches would understandably put anyone in the position of wanting to just sit back and take a hit to relax.

Many athletes, including Phelps, have been penalized for testing positive for cannabis during doping screenings. But in the years since Phelps’ three-month suspension from competing, the rules about marijuana in sports have become much laxer—at least at the Olympics. As Bustle reports, the World Anti-Doping agency raised the allowable limit of marijuana in an athlete’s system to 150 nanograms per milliliter. This is about how much of the THC metabolite THC-COOH—which is the actual substance that urine tests look for, not the initial cannabinoid itself—would remain in the body about 50 hours after lighting up. So basically as long as Olympians aren’t everyday smokers (since that makes the THC-COOH accumulate) or hitting the bong right before being tested, they should be free enough to smoke freely.

Some athletes are taking this permissiveness a step or two further and claiming that marijuana can actually be used as a performance-enhancing drug.

Men’s Fitness profiled one high-endurance athlete who says that pot helps him push himself harder.. “Cliff D.,” a triathlete based in Colorado, eats one of his homemade 30 mg THC raw vegan fruit-and-nut edibles before starting his morning training. (At other times, he’ll take hits from his vape.) Cliff has won within his age division at the South Beach Triathlon and ranked third among peers of his age in the New York City Triathlon.

He uses CBD lotion on his muscles after a workout, a reasonable and proven method of getting rid of soreness and tension. CBD is also a noted vascular relaxant, which means that it calms down overworked lungs, and helps combat muscle spasms and bodily inflammation. But when he vapes or makes edibles his preferred strain is Super Lemon Haze, a Sativa-dominant mix of Lemon Skunk and Super Silver Haze that’s won the Cannabis Cup twice. It’s got an average THC level of 16% (with high-THC strains clocking in at a whopping 25%) and low CBD levels, coming in at below 1%.

The ratio of THC to CBD in his preferred strain does seem a bit strange. You’d think that an athlete would be more interested in the pain-ameliorating and muscle relaxing effects of CBD than the psychoactive effects of THC, but for Cliff, THC is a mental stimulant. He sees it as a “supplement,” a means of staying focused and motivated—a reasonable explanation for anyone who’s smoked up and then gone on a house-cleaning binge.

It’s certainly an interesting choice to focus on THC over CBD in this case since a number of studies, including one done at the University of São Paulo, Brazil in 2003, showed that

“an increase in heart rate and blood pressure, decline of cardiac output, and reduced psychomotor activity are some of the pharmacological effects of THC that will determine a decrease in athletic performance.”

But for Cliff, the mental conditions provided by high doses of THC outweigh whatever possibly negative physical side-effects might accompany his vegan edibles. Men’s Fitness writes,

“Cliff argues that his Super Lemon Haze is perfect for endurance exercise, pointing out that athletes frequently rush through their workouts or pay too much attention to the pace clock or their training partners. Swimming, cycling, and running […] reward extreme focus and an impeccable, machinelike technique. [Weed], he says, dials in his brain.”

And indeed, if the matter is more one of machine-like focus and learning to pass the time than it is a concern of physical acuity, perhaps Cliff isn’t in the wrong despite what science says. It’s the same reason that couch athletes—participants in e-sports and casual video game players—claim that their scores are better and their focus more steady when they’re high versus when they’re sober. If your goal is to improve the way that you pay attention to things in the short term, rather than focusing on reaching peak physical performance, maybe weed really is a performance-enhancing drug. Just don’t tell the doping agency.