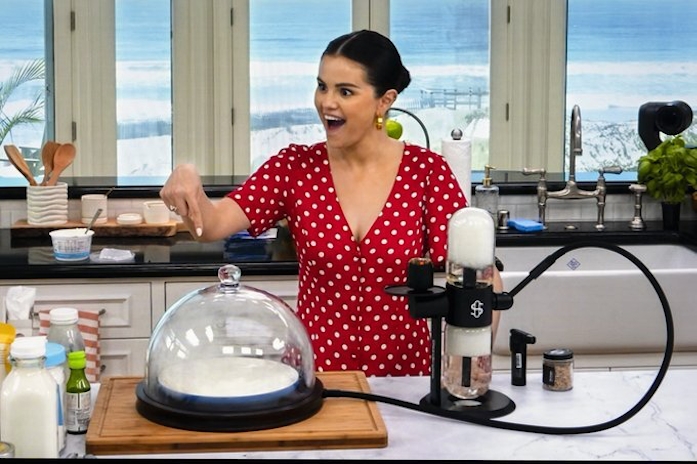 High Culture: Selena Gomez Chefs It Up With The Stündenglass Gravity Infuser

In the second episode of the fourth season of Selena + Chef, Ms. Gomez uses the renowned Stündenglass Gravity Infuser for a delicious Mexican meal.

You might have seen the high-end Stündenglass Gravity Infuser in music videos, campaigns, and even at your local dispensary.

What looks like a futuristic gravity bong is much more than that. There’s a reason why it’s not called the Stündenglass Gravity Bong. That’s because you can use this state-of-the-art device for a few things, some that don’t involve cannabis.

If you haven’t seen the Stündenglass in action, you’re in luck. During the second episode of the fourth season of Selena Gomez’s quarantine cooking show, Selena + Chef, she uses the stand-out device for a delicious Mexican-inspired meal.

Selena’s friends Theresa and Raquelle were also helping in the kitchen. All three ladies were amazed by the intricate nature of neat visuals provided by the Stündenglass Gravity Infuser.

The device didn’t come into the shot until Kish started making the Mexican street corn. As the saucy base, she used 2 cups of yogurt thinly slathered on a plate.

Kish explained how it’s common for Mexican street corn to have a charred smokiness to it. For this dish, she uses the Stündenglass, a cloche (dome), and pecan wood chips to give the yogurt a smokey flavor.

As the smoke started to rise and fill the cloche, Theresa added, “This is one of the coolest machines I’ve ever seen.”

The yogurt stayed cloche for the rest of the episode until they removed it for the base of the street corn dish. They added a lovely corn salad mix along with agave glazed carrots.

Raquelle tells Selena it’s “Maybe one of the prettiest dishes you’ve ever made.”

This was just one example of the many dishes you could infuse with a smokey flavor, thanks to the Stündenglass Gravity Infuser.

And don’t forget about beverages, too. It may look intimidating, but if a newbie to the kitchen like Selena Gomez can use the Stündenglass, so can you.