A U-Haul Got Pulled Over With Almost 3,000 Pounds Of Weed

The ones that got away. 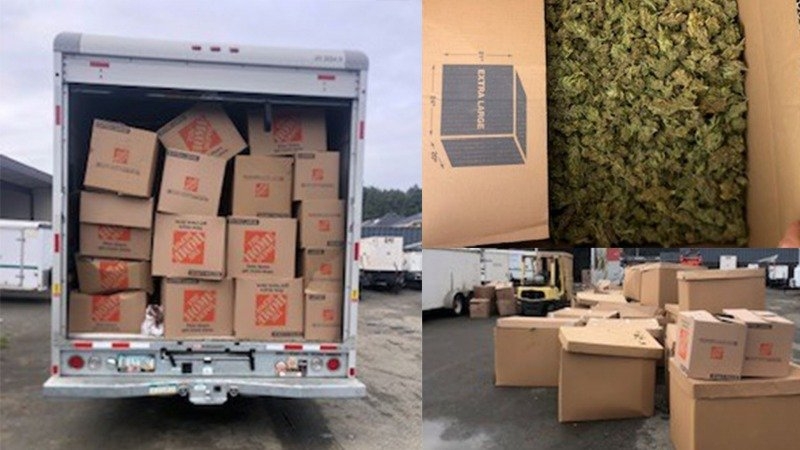 Last week, a hefty amount of cannabis was seized when police officers in Oregon stopped a U-Haul truck filled with green. Inside the truck lied $2.2 million worth of marijuana.

According to an AP News report that touched on a police report from the incident, a detective with the Linn Interagency Narcotics Enforcement Team noticed a 26-foot-long U-Haul truck on the I-5 when authorities then got a whiff and smelt a “strong odor of cannabis.”

The detective took action and called on local law enforcement, who then stopped the vehicle and inspected the situation. The two men in the truck were lying through their teeth, telling police that they were transporting furniture, but the “overwhelming” scent that lingered in the truck was enough proof for the officers.

Officers then inspected the vehicle, where they found many black plastic garbage bags containing cannabis, nearly 2,800 pounds or 1,270 kilograms. Police confiscated the excessive amounts of cannabis as well as the growing equipment inside the truck.

Two men were arrested at the scene on suspicion of unlawful possession and delivery of marijuana and criminal conspiracy. We were surprised to hear that this went down in Oregon, a state that deems both recreational and medical cannabis as legal. That said, the state does have boundaries regarding the plant.

According to the National Organization for the Reform of Marijuana Laws, possession of more than four ounces of cannabis in a public setting is a Class A misdemeanor. The consequences are up to one year in prison and a fine of up to $6,250. Even worse, those guilty of manufacturing cannabis that exceeds the government-allowed amount of four plants on private residences can face up to five years in prison with a fine of $125,000.

A similar case occurred back in 2019 when a 39-year-old man was arrested driving a U-Haul down the I-40. During a routine traffic stop, authorities raised suspicion and inspected his vehicle, which held more than 3,000 pounds or 1,361 kilograms of cannabis packed in boxes. Authorities added that he was transporting them from San Jose to the Bronx.

The Florida man was later charged with felony possession of cannabis. It looks like this isn’t the only case; last year in California, authorities were suspicious of a U-Haul driver who chose not to weigh in at the scales at Mendocino Country’s Ridgewood Summit off Hwy 101. Authorities stopped the truck and inspected it to reveal another large amount of cannabis.