The Odd Science Behind Marijuana And Metabolism

Marijuana consumers eat 600 more calories per day than the average non-smoking person. But, for some reason, those extra calories don’t necessarily turn into fat. How is that possible?
August 13, 2019
Written by Anna Wilcox 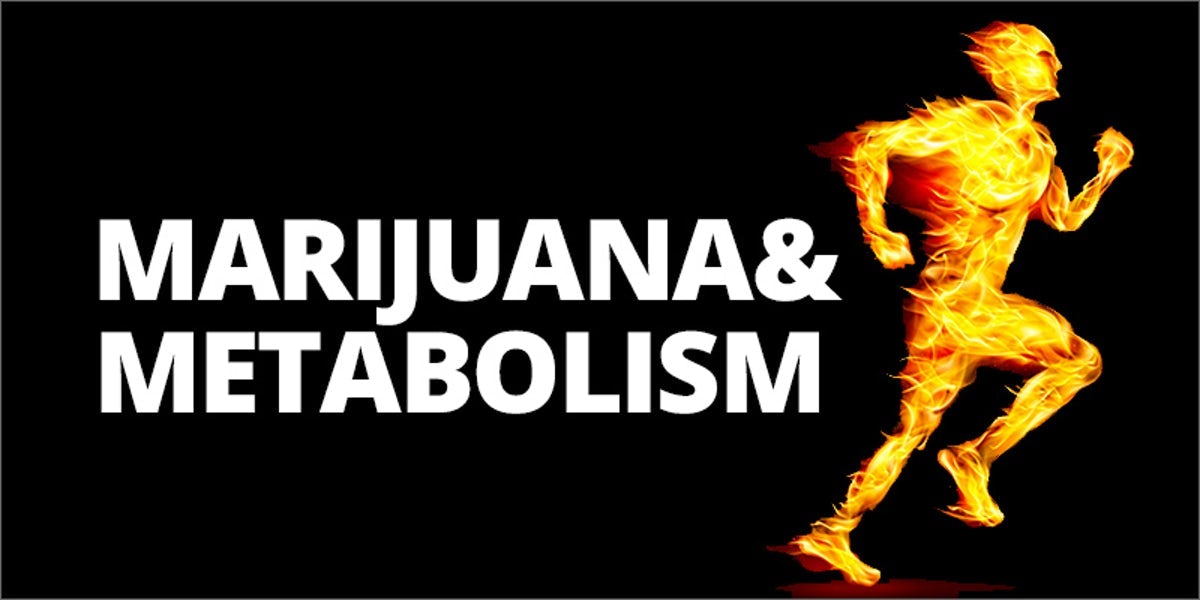 Something peculiar happens to stoners when they overeat. No joke, marijuana consumers eat 600 more calories per day than the average non-smoking person. But, for some reason, those extra calories don’t necessarily turn into fat. How is that possible? New research raises some interesting questions about cannabinoids, metabolism, and belly fat.

In research published late last year, scientists from the University of Miami reported that regular marijuana users were 54% less likely to suffer from metabolic syndrome than their non-using counterparts. According to the Mayo Clinic, metabolic syndrome is a term for a series of co-occurring health problems. The conditions include:

When these factors all occur together, they increase your likelihood of developing stroke, diabetes, and heart disease.

The University of Miami study examined data from nearly 8,500 individuals via the National Health and Nutrition Surveys. Participants included were between the 20 and 59-years-old. They found cannabis users on average:

These findings are in tune with other research on marijuana and metabolism. Research from 2013 and 2014 has shown that regular weed smokers have lower BMIs and waistlines up to 1.5 inches smaller than non-users. In the face of a worldwide obesity epidemic, the scientific community is struggling to figure out just how weed is able to have such a positive effect on your metabolism.

The ECS connects several basic parts of your brain that control movement, emotion, hormone production, and pleasure centers. It’s the responsibility of the ECS to coordinate messages between these parts of the brain and corresponding parts of the body. This vast chemical network is a major reason why we have an appetite, feel pleasure during exercise or sex and experience different moods.

Researchers are still struggling to figure out the precise nuances of the ECS in general. But, some pretty fascinating discoveries about the ECS and our metabolism have been made over the past few years. Turns out, when we feel hungry, an endocannabinoid called “anandamide” is released in our system. Anandamide is the chemical that THC replaces when we consume marijuana. This compound specifically activates the cell receptor known as the CB1 receptor.

Back in 2008, Italian researchers targeted the CB1 receptor as a potential cause for obesity. Research conducted a few years later by a different Italian institution found that who have metabolic syndrome have been shown to have a dysfunction in the endocannabinoid system. Namely, sufferers of metabolic diseases have overstimulated CB1 receptors.

In theory, the overactivation of the CB1 receptor by THC should make you store MORE fat. Sans marijuana, too much anandamide binding to the same receptors encourages you to binge eat and crave fatty, sugary foods. This excess energy is then turned into excess belly chub.

“Initially, [the taste of fat] sends a message to the brain. The brain then sends a message to the gut, where intestinal receptors are stimulated to produce endocannabinoids. In turn, these chemicals affect hunger and satiety and ramp up your appetite for even more fat-laden foods. That’s why you can’t eat just one French fry.”

The ECS is what enables you to feel pleasure from eating. It also is what helps your body regulate blood sugar levels and sends a signal letting you know when you should stop snacking.

Yet for some perplexing reason, stuffing your face with carb-laden, fatty deliciousness while high doesn’t add inches to the waistline. Experiments conducted on laboratory rats suggest that cannabidiol (CBD) might be the reason for this.

CBD Is An Appetite Suppressant

The funny thing about the marijuana plant is that when you consume it, you’re taking in two substances that largely contradict each other. THC increases appetite by binding to CB1 cell receptors in your brain. But, at the same time, CBD tells those cell receptors to deactivate.

Researchers at the School of Pharmacy in Berkshire’s University of Reading treated male rats with three different cannabinoids and watched to see how each chemical affected the rodents’ appetite. The three cannabinoids they tested were:

They found that CBN caused rats to eat more and CBG had no effect on appetite. But, CBD worked like magic. The rats still ate, but their overall food intake was less during the test period. These findings on CBD confirm what a handful of other studies have also shown.

In 2012, scientists in Budapest found that CBD was effective at reducing the amount of fat build-up inside arteries. This fat build-up happens when you have high blood sugar. A study from 2011 found that CBD protected insulin-producing cells from damage in the pancreas. Another study involving rodents from 2010 found that CBD decreased the body weight of adult rats.

These research results have made CBD a huge target as a future medicine for diabetes, obesity, and other metabolic illnesses. In fact, UK-based GW Pharmaceuticals is currently developing a cannabis-derived diabetes drug. GW Pharma is the creator of Sativex, a cannabis mouth spray that treats muscle spasms in Multiple Sclerosis patients.

So, what does all of this research suggest? When you smoke/eat (for example with cannabis coconut oil)/dab (learn what is dabbing here)/vape weed (high CBD low THC strains or products like aurora temple), you are consuming some compounds that rev up your metabolism and make you hungry (THC). But, you’re also consuming other cannabinoids that directly help mitigate some of that metabolic dysregulation (CBD). This goes to show you just how complicated marijuana science can be.

Is It A Tolerance Thing?

CBD may help curb cravings, but there’s another reason why regular weed smoking may fight obesity: tolerance. In an interview with Time, Daniele Piomelli, a professor of pharmacology at the University of California, Irvine explains that repeated substance use may actually dull the CB1 receptors over time. He states:

“This has been shown to happen in people who smoke marijuana. This weakening of [these receptors] translates into a lower risk for obesity and diabetes because the inactive receptor would be unable to respond to our own cannabis-like molecules, which we know are important in keeping us chubby.”

But, oddly enough, your tolerance for THC just might be what’s keeping your blood sugar down and some centimeters off of your waistline.

Cannabis drives your metabolism by kick-starting your appetite. But, there are a lot of foods out there that also help give your body an extra boost. Here are a few healthy recipes that have the obesity-fighting benefits of cannabis AND nutrients that help maintain weight:

As always, consult your doctor before making any changes to your diet. This is especially true if you’ve been diagnosed with a metabolic disorder.

If you want to try infusing your own dishes, check out the LEVO Oil Infuser.

Picking The Right Strain For Your Metabolism

Some people enjoy the munchies and some people don’t. If you want to increase food cravings, shoot for a strain that’s high in THC. If you’re hoping to maintain your weight or even shed a few pounds, opt for something high in CBD. For many people, however, finding something somewhere in between will give you the best of both worlds. Picking strains that are diverse in cannabinoids enables you to experience the benefits of all of them.

Here are a few mild-strength strains to consider before you cook up any of the metabolism-boosting edibles listed above:

As this article has hopefully made obvious, there’s a lot going on when it comes to marijuana’s impact on your metabolism. THC is the culprit behind what drives us to stuff our faces when we’re stoned. CBD seems to play the part of the housekeeper. The cannabinoid may pick up the mess after we’ve gone on THC-induced eating rampages.

All that being said, our own tolerance to the marijuana plant may be what ultimately keeps rates of obesity and diabetes down in regular cannabis users. We do not know precisely why cannabinoids from the marijuana plant have such a different impact on our metabolism than our own natural endocannabinoids. But, we do know that weed may prove to be an effective new medicine for those suffering from metabolic disorders. Hats off to that.

How bad do you get the munchies when you smoke weed? Have you noticed any weight gain since you began smoking? We’re curious! Tell us about your experience on our social media accounts or write us a message in the comments section below! We’d love to hear your story.