For The Smoothest, Most Potent High Here’s How to Smoke Hash

From joints and bongs to vaporizers and hot knives, here’s how to smoke hash. 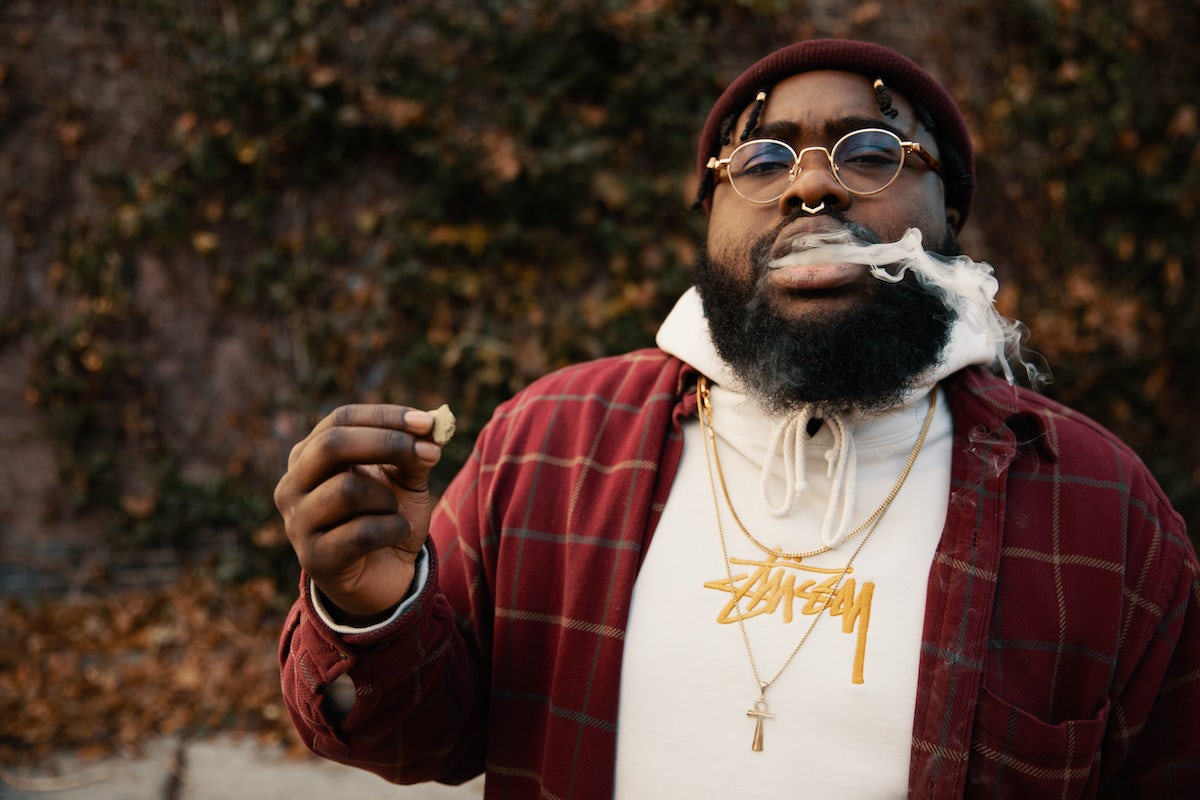 Photography by Jon Coward for Herb

Smoking hash is a timeless cannabis pastime. An excellent hash is tasty, smooth, and potent. Top-quality hash can be found at dispensaries and extraction competitions, but simple hash preparations are also easy to make at home after trimming and handling your own plants. Once you have procured your hash, though, one key question remains: how do you smoke it? From the classic hot knife to the simple cup method, here’s the ultimate guide on how to smoke hash.

How To Load A Hash Bowl

Loading a hash bowl is easy—just sprinkle some right on top! You can place hash atop of ground flower in a standard bong, pipe, or bubbler. Placing dried flower at the bottom of the bowl ensures that burning hash embers will not be immediately pulled through your device and wind up in lungs. Smoking hash with flower can also slow down your burn, making the experience slightly more long-lived and definitely more enjoyable.

If you’re hoping to skip the flower and smoke hash simply by itself, using a screen is highly recommended. Hash is made by using pressure to combine individual trichome crystals (kief) together. Once this product is heated, it can quickly melt. Using a screen helps keep the hash in place and prevents you from inhaling excess hot oil material. Screens can be ordered online or picked up at a standard smoke shop. To use the screen, simply place it at the bottom of your bowl before loading your hash. You may have to bend your screen slightly (depending on its size) in order to get it to fit comfortably into your bowl.

How To Smoke Hash By Itself

While there are many different ways to smoke hash, there’s no need to reinvent the wheel. When smoking hash out of a pipe or a bubbler, however, there are a few things to keep in mind. First, you’ll want to stick to smaller chunks of hash. Why? As we mentioned, hash is made from the collected oils that have been removed from cannabis plants and compressed. These compressed oils will smolder longer than typical flower. If you place all of your hash in your bowl at once, chances are you’ll waste some of your coveted product. Some consumers also use a torch lighter—not a dab torch—to light their hash. This may not be necessary, however, depending on the temperature in the room and how well your hash responds to a normal lighter. Ideally, you want a slow smolder from hash, not a quick one-and-done.

How To Smoke Hash Using A Hot Knife

For some consumers, smoking hash out of a pipe or bong is akin to sacrilege. Hot knives are not exactly an efficient way to smoke hash, but this is a tried-and-true method that has been used for generations. Easy to do when no other tools are available, here’s how to smoke hash using knives:

Heat the blades of both knives to a medium-high heat using a stovetop or a torch. If you’re using a straw, it may be helpful to place it into your mouth now. Metal straws make for the safest choice—we urge a lot of care if you’re using a plastic straw or cut-off bottle.

Step 2: Place Hash on One Knife

Drop a dollop of hash onto one of the hot knife blades. Next, quickly place the other hot knife blade on top of the hash dollop. Smoke should begin to rise.

Use your straw or bottle to inhale the smoke. If you’re not using a straw, simply place your face close enough to the smoke to inhale, being very careful not to burn yourself. The knife method may be popular, but it certainly isn’t practical in terms of consumer safety and ease of inhalation.

Hoping to leave your hot knife days behind you? You can easily smoke hash while just holding it in your hand. Of course, you’ll want to roll it into a joint-like shape, first. Here’s how to do it:

If you grow cannabis at home, you’re probably familiar with “scissor hash”. As you trim and work with your plants, sticky resin ends up all over your hands, gloves, and scissors. Don’t let this green gold go to waste! You can roll this excess resin into a simple ball of hash. Though, to be honest, making a hash ball is far easier with resin that is stuck to your gloves than your bare hands.

Once rolled into a ball, begin to rub it between your hands to make a long thin roll. Grab some wax paper and press the hash in between two layers.

Grab your torch and glass jar, or another cylindrical object that can handle the heat. Heat your jar or equivalent until it is nice and hot, but not hot enough to ignite the hash or paper. It just needs to be really, really, warm. If you don’t have a torch, you can boil the rolling device in hot water. In either case, make sure not to burn yourself.

Take the glass jar and roll over the wax paper, pressing down to make a pancake shape. Once flattened out, remove gently from the wax paper and roll into a tube, then let dry out for a couple of days.

The bigger the hash tube, the better. You don’t want to roll it too thin, as it becomes brittle as it dries. Once it’s dry, light it up and smoke it just like a joint.

How To Smoke Dry Sift Hash

Smoking dry sift hash is another simple way to enjoy hash. Dry sift, also called kief, is the collected resin crystals that have been separated from cannabis flowers. To smoke dry sift, simply sprinkle some of the resin powder on top of your next bowl of flower.

The heat and pressure from the hair straightener should melt the dry sift into something more akin to rosin. Once partially melted, the dry sift will become easier to manipulate. You can then use this rosin in a vaporizer, on a dab rig, or simply add it to your next joint.

You can also make your own pressed hash from dry sift using a pollen press, which can be purchased online. Pressing your dry sift will make it easier to handle and smoke. It will also allow you to consume a more concentrated amount of dry sift in one sitting.

How To Smoke Hash In A Vaporizer

Vaporizing hash is as easy as vaporizing flower or concentrates. Due to the unique consistency of hash, it can often be vaporized in both dry herb and concentrate vaporizers. Chambers designed for dry herbs may produce a slightly better hash experience, however.

When vaporizing hash, it is recommended to use a higher temperature than you would use for your dried flower. That said, you do not need to heat hash to the same high temperatures (400℉ and beyond) that you would use for other types of cannabis concentrates. Simply place a small dollop of hash into your vaporizer, gently warm up the hash by pushing the fire button a couple of times, and then enjoy your hash vapor as desired.

How To Smoke Hash In a Cup

Hoping for a bigger hit? You can easily collect hash smoke into a cup and inhale. This is an excellent choice for those interested in smoking hash at a party or social gathering, when you’ve accidentally left your vape at home.

Place a glass cup upside down on the edge of a coffee table, countertop, or another hard surface. Only a small portion of the lip should peek over the edge.

Step 2: Place a Dollop of Hash On your Dab Tool

Pick off a small chunk of hash and carefully secure it to your dab tool. The idea is that you want to make sure that your hash is unlikely to fall off once it is burning, as it could potentially burn a hole in your sofa, pants, or sock if it falls.

Use a lighter to light your hash. You may have to light it and then gently blow on it to get it to retain heat. The idea is that you want the hash to burn as a slow, smoldering ember. If the hash is properly lit, a small trail of smoke should climb continuously upward.

Step 4: Use the Cup To Collect Smoke

Once your hash is lit, carefully place the tip of the dab tool under the lip of the cup. Smoke should begin collecting in the cup for you to inhale.

To inhale the smoke, simply use a straw or your mouth to inhale the tasty clouds out from the cup. You’ll probably have to bend over in a weird way to do so, but the hit is worth the awkward posture.

How To Smoke Hash In A Joint

Making a solid hash joint is all about layering. Begin your hash joint in the same fashion as you would all other joints. Starting with a horizontal paper on a hard surface, add a light layer of the ground flower first. Then, evenly disperse some hash crumbles for the second layer. Top off your joint with a light layer of flower and roll it up tight. Simply light and enjoy as normal.

How To Smoke Hash In A Bong

Unless you’re topping off some flower with a little bit of hash, the best way to smoke hash out of a bong is using a screen. Place a screen at the bottom of a clean bong bowl. Place a small amount of hash into the bowl and light the hash with a traditional lighter. You may need to blow on the hash gently to encourage it to burn as a continuous ember. Some people prefer to light their hash with a torch lighter. As your hash gently burns, simply inhale.