Dabbing 101: What Is Dabbing And Everything You Need To Know About It

Herb’s guide to the new wave of cannabis consumption: dabbing. 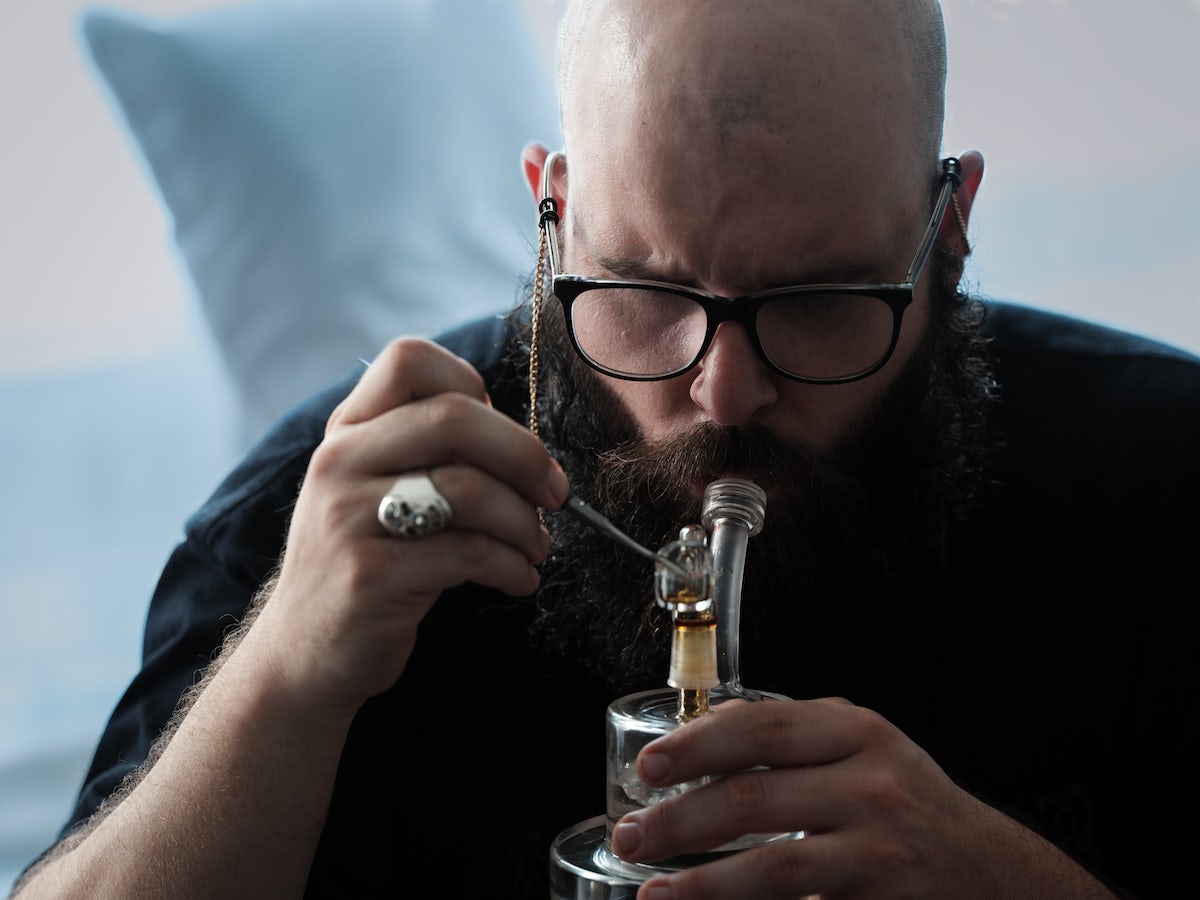 Dabbing in the cannabis community refers to consuming a dose of marijuana oil, usually being heated on a nail and then inhaled through a water rig. When you dab, you are heating a highly concentrated form of cannabis and inhaling the vaporized oil which gives you an intense high. The actual dabs can be made with a variety of different extraction techniques, the most common being butane hash oil (BHO).

The cannabis concentrate used for dabbing has many names, although the popular names are wax, budder, shatter, or depending on the extraction method, BHO. The concentrate can be extracted from the cannabis plant in two ways. The most common way of extraction is through blasting butane through the plant, hence the BHO. Butane is pushed through the cannabis plant material, leaching out the essential oils. Those are collected and the butane evaporates.

Concentrates come in various forms. Some of the most common types are shatter and wax. Shatter, also known as glass, is stunningly beautiful. While transparency does not always mean a higher quality, shatter is one of the purest forms of cannabis oil.

Wax looks like wax because the molecules crystallize after extraction. This concentrate is extremely versatile – it can be used in a rig or crumbled as a topping to give your joint an extra kick.

The levels of THC in concentrates can range anywhere from 70%-90%, which is far higher than any bud you could roll up and smoke.

If you’re new to concentrates, it’s beyond important to recognize that concentrates are incredibly potent. Start with one hit of a concentrate and see how you feel. Don’t ruin the concentrate experience by rushing into it, getting too high, and freaking out.

Dab slowly! Dispensaries sell concentrates ranging in percentage of potency, so it’s not a bad idea to choose one in the 70% THC range when you’re just starting out.

What is Live Resin?

Live resin is a “dabable” extract, but the main thing that differentiates it from other types of cannabis concentrates is the plant material that’s used. Live resin uses entire plants that are frozen at critical temperatures soon after harvesting, meaning they aren’t cured. Then, the frozen plants are used to make a solvent extract, similar to Butane Hash Oil (BHO), but at much lower temperatures with chilled liquid butane. The resulting product has a much richer terpene profile than regular BHO and even than cured cannabis flowers.

Terpenes are fragrant oils produced in the resin glands of cannabis flower alongside cannabinoids like THC and CBD. They give weed its aroma and taste and also contribute to the herb’s medical benefits and overall effects.

When cannabis is cured, 55 to 85 percent of the terpene content can be lost, according to a highly cited 1996 study from the University of Mississippi. Most cannabis concentrates, like BHO shatter, are not only made with cured weed but also end up burning most of the remaining terpenes in the extraction process. But that’s how live resin is different: more terpenes are retained than in any other form of cannabis.

What researchers University of Mississippi study found was that many monoterpenes evaporate more quickly, due to their size, during the curing process than sesquiterpenes. Then, the heavier sesquiterpenes that remain have a greater influence on the aroma and flavor of cured buds, as well as its medical benefits.

Again, this is how live resin is different. Because it’s freshly frozen, it should retain much more of the terpene profile of the original, fresh cannabis plant. That includes more monoterpenes and terpenes in general.

The Origins of Dabbing

Hashish is the earliest form of cannabis extracts and is a concentrated medicinal tar substance often black, brown, and sometimes green in color pulled from the female plants leaves. This process has existed for centuries first being believed to have originated in Eastern Asia then spreading to India, Nepal, The Himalayas, Afghanistan, Turkey, and Morocco as far back as 100 A.D.

The Brotherhood of Eternal Love

The Brotherhood of Eternal Love was an organization of drug users and distributors from the mid-1960’s through the late 1970’s in Orange County, California. This group was also known as the “Hippie Mafia” and distributed as well as marijuana in hopes of starting a “Psychedelic Revolution” throughout the United States during the time.

John Griggs started the group as a commune but soon began to manufacture LSD and import hashish into the country. In the late 70’s the Brotherhood hired the Weather Underground, a radical leftist organization, for $25,000 to help Timothy Leary make his way to Algeria.

Early marijuana experimentation among the Brotherhood lead to the first BHO extractions then called “Honey Oil” over 50 years ago, turning music and party scenes during the time into what would become the hippie and stoner peace movements, lending to passive protest against war, and ideas of free love.

This was the beginning of what would become the future of dabbing. A form that has grown to nearly 90% purity, and continues to become ever popular not only among stoners and hippies, but among general public, medical patients, and medical sciences themselves.

In order to dab, you’re going to need a few essential things.  First, get your concentrates ready, whether it be oil, shatter, wax, or rosin this is the first tool you’ll need to head down the dab path.

Now that you have gathered the necessary tools for dabbing marijuana concentrates, take a seat at a table and get ready to dab. The following steps will guide you through the dabbing process.

Pro tip: Use a separate rig for dabs only—never the cannabis plant, as the resin will negatively alter the quality of your dab.

What Are The Benefits of Dabbing

Live resin’s rich terpene profile not only gives it a superior flavor for dabbing but provides the maximum amount of medical benefits. That’s because many cannabis experts, including scientist Ethan Russo, believe terpenes actually account for much of cannabis’ medical properties and psychoactive effects. By providing more access to terpenes, live resin provides users more control over their experience and cannabis medicine.

Terpenes have an incredible array of potential medical value, from fighting cancer to providing anti-anxiety relief. For instance, studies have found the common terpene limonene to prevent cancer cell proliferation, and pinene is a bronchodilator that can help those with asthma. Check out our full coverage of cannabis terpenes here.

Live resin is especially beneficial to those who need fast relief from symptoms like nausea, migraines, and tremors. Dabs provide a strong and potent effect without the need for actual combustion, and so can also be a good option for those who want to avoid smoking.

Live resin is only as good as the fresh flower it’s made from, so look out for cultivators you know and trust releasing limited batches. The only downside of live resin is the steeper price tag than “regular” concentrates. However, it’s incredible flavor and robust terpene profile is worth the extra change, on special occasions at least.

Also, dabs didn’t get the nicknames “shatter” and “pot on steroids” for no reason. According to Stogner, dabs are four times stronger than your typical joint. Dr. Dustin Sulak, a physician that legally dispenses cannabis in Maine, told Healthline that a single hit concentrate is equal to 3 to 10 hits of herbal cannabis, depending on the potency.

The Risks of Dabbing

Though expert dabbers tend to know what they’re doing and what to avoid, it’s important for everyone to know the potential risks of dabbing, many of which come from the extraction process or the equipment used to dab.

The extraction process can be dangerous

The extraction process is what makes experts so nervous because it sometimes involves the use of butane, a highly volatile and dangerous gas. John Stogner, the assistant professor of criminology at the University of North Carolina, put together a study that focused on the health hazards of dabbing that was published in Pediatrics.

He claims it’s all too easy to obtain severe burns and injuries during the extraction process. Being that butane is capable of heating up metal and glass, it can just as easily heat you up and cause an injury.

There are several tutorials and how-to guides available online that give people step by step instructions. Check out this article on extraction without chemicals to see how you can do it safely.

Not only could get hurt, but you might also run the risk of starting a fire and impacting those around you. In November 2013, 33-year-old David Shultz caused an entire explosion in his apartment building while using butane for extraction. Consequently, seven other residents ended up at the hospital and an 87-year-old woman died from injuries. In return, he got nine years in prison.

In Colorado alone, the number of explosions from dabbing increased from 2013 to 2014, rising from 12 to 32, according to USA Today. Obviously, this isn’t a one case situation, and people should take caution and be sure to avoid mistakes. Luckily, there are numerous ways to heat a dab that won’t leave you or anyone else with an injury, such as using an e-nail.

Dr. Sulak is more concerned about the potency of dabs than the fact that you could burn your house down. Dabs have such a strong dose of THC that you administer so quickly that your body could become accustomed to the high levels of THC.

If your tolerance increases, you will need larger amounts of herb to achieve a high. Worst-case scenario, you may have trouble getting high off herbal cannabis after your body gets used to dabs. However, there are many ways to combat a high tolerance, such as taking a tolerance break or simply doing smaller dabs.

You could be ingesting other substances

The equipment you use during the extraction process may contain disgusting ingredients that could eventually enter your system. For example, your metal bong could be rusty and have solder on it, which would end up in your butane hash oil and straight into your body.

Smoking these anonymous chemical contaminants is avoidable, though. Buying high-quality equipment and cleaning your rig now and then will help prevent ingesting harmful ingredients. So make sure you keep your equipment clean.

Too much may induce nausea

As with anything, sometimes you can have a little too much, and it’ll leave you feeling not so hot. You may experience some nausea and maybe paranoia.

Controlling your dose is important but can be tricky. Always consult with your budtender or an experienced dabber as it will help avoid the rough experience of consuming too many dabs.

Cannabis For You, Near You
Join the Herb community and get exclusive offers, early access to products, and good vibes.
September 07, 2018 — Last Updated August 28, 2020
Written by Miroslav Tomoski