Now Reading:culture | Deep in the Himalayas, a village tries to grow amidst ban 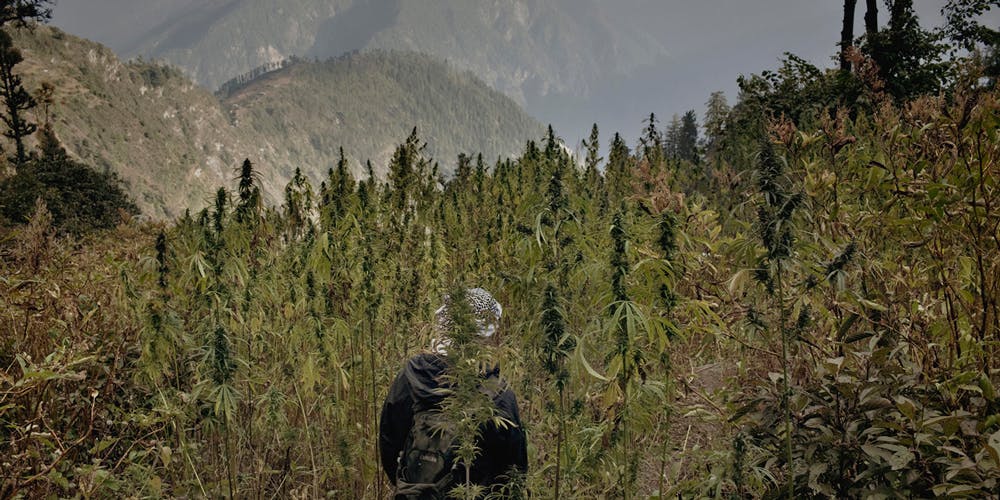 Deep in the Himalayas, a village tries to grow amidst ban

Nestled by mountain ranges, a small village that relies on the production of cannabis is struggling to survive.

Nestled in the Himalayan foothills, entire villages survive on the traditional yet illegal production of cannabis resin despite stringent legislation. Perched on mountains at 2700 meters, overlooking valleys of perfectly crossed mountains, they’re mostly reachable only by foot, over a three-hour long and steep path.

Villagers say it’s been a good season this year since police went only twice up the fields to cut down plants. But it’s only a drop in the ocean, for it’s nearly impossible to curb the illegal cultivation, especially in areas where ganja grows wild, such as the Indian Himalayas.

A fine resin known as charas is extracted with a peculiar and laborious method from cannabis indica flowers, a strain that is considered native to the Himalayan range. Charas is known by many as the best hash in the world, and it can cost up to 20US$ per gram on the streets in the West.

In the last 40 years, out of chance and necessity, many villagers have turned to the manufacturing of hashish. Their story is intertwined with prohibition and endemic poverty of mountain areas, and results into illegality, in a country where marijuana use is widespread and tolerated.

Unlike other types of hashish, charas is produced by “rubbing” the plant while still alive, then collecting the resin from the hands. According to historians, charas has been used as a cash crop in India for a very long time, even the Mughals emperors used to trade the precious resin beyond the borders of the Empire. Since the 70s charas is massively back as a cash crop and, the influx of mass tourism has brought new channels for trading it abroad and within India.

According to the locals, they have been smoking pot as a mixture of resin and inflorescences, roughly gathered in the hands. But it was only with the arrival of hippies in the 70s, who followed sadhus (Hindu holy men) on mystical paths, that the practice of extracting the resin had been improved. The same technique with which, still today, tons of charas are produced every year.

Despite being widespread, there are no official figures on India’s charas production or cannabis cultivation. The UN Office on Drugs and Crime (UNODC) assesses in its annual World Drug Reports that India is identified as a “source country” although it doesn’t go further: there are no sufficient data to deduct nationwide estimations and figures, for the Indian government has never conducted a massive survey to assess cultivation and production within its boundaries.

Cannabis indica infests many parts of India and especially the Himalayas, making it difficult to trace producers, who have started to grow always higher on private and public fields to escape raids. Thousands of families in the region survive on charas production and its illegal trafficking, whose mechanisms are oiled by widespread corruption.

Farmers sell the resin to foreigners, but also Indians from big cities. Demand is ever rising; new bars and guesthouses sprout every season. Always more fields are allocated to ganja, being extremely profitable, though monoculture and deforestation are destroying the soil. Concrete is slowly replacing local style houses – made of stone, wood and cow dung.

Yet in some ways, time seems to stand still in these valleys where life still follows the rhythm of nature and women give birth at home; where distances are calculated in walking hours and medicaments are made out of herbs, roots and cow urine; where people cook on wood-stoves and go to the loo in the wood.

The villages scattered on the Himalayan slopes are handfuls of colorful houses with dark roofs made of thin stone slabs, just a few shops selling soap, cigarettes, legumes, rice, and flour; one tap of water and an old temple.

When India signed the War on Drugs’ cornerstone treaty – 1961 UN Single Convention on Narcotic Drugs – Indian society did not seem ready to abandon the use of cannabis, which dates back to the sacred Veda texts and it’s been part of religious rituals and festivities ever since.

It took 24 years for India to cement this commitment into law, the controversial 1985 Narcotic Drugs and Psychotropic Substances Act that criminalized cannabis though, has been argued, didn’t manage to curb the illegal production and trafficking.

“The obligation to eliminate cannabis in countries with widespread traditional use is a clear example of the colonial background of the Convention, a clear violation of indigenous and religious rights. It would have never passed nowadays”, comments Tom Blickman, from the Dutch think-tank Transnational Institute (TNI).

Romesh Bhattacharji, ex-Narcotics Commissioner of India, echoes him pointing out, “Nearly 400 of the 640 districts in India have cannabis, which makes at least 100,000 hectares. It’s time for the Indian Government to stop being a slave to UN-backed policies: since 1985, cannabis use and cultivation has only proliferated. Prohibition has clearly failed”.

During the negotiations of the Convention, a group of representatives of India strongly opposed the prohibition of the non-medical and non-recreational use of opium and cannabis in the county. The “Indian Hemp Drug Commission,” whose task was to assess the extent of cannabis cultivation and use in colonial India, drew up a report in which argued the ban on cultivation was “neither necessary nor appropriate.”

But the Commission’s report went unheeded, and India joined the anti-drug treaties. Only bhang, a preparation of cannabis leaves and flowers consumed in beverages and foods, was left out of the NDPS and is still widely used during Hindu festivals, like Holi and Shivaratri.

“The Commission’s recommendations, which date back to 120 years ago, are very similar to how cannabis is regulated today in some states in the US”, concludes Blickman, “a system of cultivation, production, and sale regulated by licenses and taxes.” But the debate on legalization is still a taboo in India for prohibition has permeated many levels of the society.

Walking the thin line between tradition and prohibition, cannabis farming has enabled many families to escape poverty and hunger. Many cannabis farmers have never grown anything legal in their life. To them, charas is a gift from God. Its cultivation, production, and use are imbued with spirituality. But today, it’s all about business.