It could be the biggest year yet for weed. 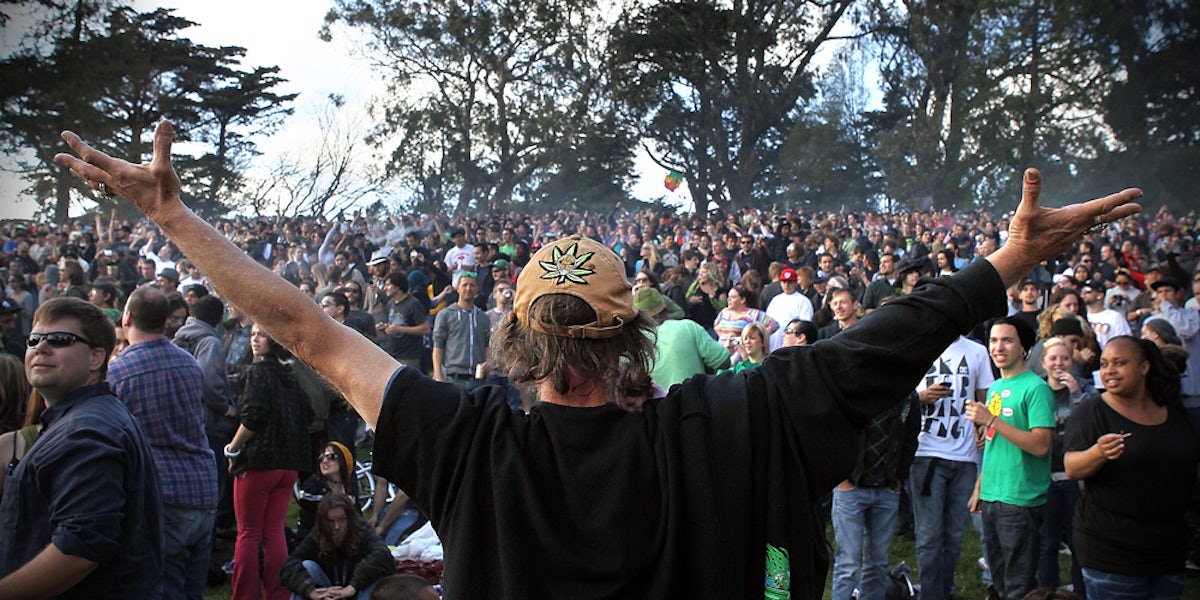 SAN FRANCISCO – APRIL 20: A cloud of smoke rests over the heads of a group of people during a 420 Day celebration on ‘Hippie Hill’ in Golden Gate Park April 20, 2010 in San Francisco, California. April 20th has become a de facto holiday for marijuana advocates, with large gatherings and ‘smoke outs’ in many parts of the United States.(Photo by Justin Sullivan/Getty Images)

The momentum’s on our side. More and more cracks are appearing in the wall of cannabis prohibition, though it once seemed insurmountable. And according to industry experts, 2018—with the huge California recreational market opening on January 1 and the midterm elections coming in November—could be the biggest year yet for weed. Here are their predictions.

‘Stigma Will Continue to Fade’

According to Bob Fireman, CEO of industry analysts MariMed Advisors, the perception of weed is changing quickly.

“The stigma of cannabis continues to fade thanks to education efforts at the state and local levels, a willingness of high profile figures and medical professionals to discuss cannabis’ health benefits backed by international clinical trials, as well as balanced news coverage of the industry,” Fireman said.

This change in perception could be, in part, due to all the companies putting out products that are well-made and tested.

“From a business standpoint, new levels of standards and professionalism in the industry are helping cannabis transition from its illicit past to legitimate, pure, organic and precision-dosed products with adult labeling and childproof packaging approaching pharmaceutical industry levels,” Fireman said.

While 2017 was all about Nevada, according to Leslie Bocskor, president of cannabis advisory firm Electrum Partners: “The story for 2018 will be California.”

“Expect delays and hiccups for several months after launch in Cali,” Bocskor says. “However, after they get things worked out, the revenues will grow and mission-critical tax dollars will accumulate to the delight of all stakeholders.”

“Also, banking remains a top priority for everyone concerned, and our expectation is that we will see innovation in this space and positive movement during 2018,” Bocskor said. Currently, most dispensaries continue to handle large amounts of cash as banks are skeptical of working with them while marijuana remains federally illegal. Cannabis industry leaders are proactively searching for solutions such as cryptocurrency.

The new year is almost certain to produce more billion-dollar companies in the cannabis space, according to Jim Pakulis, president of Lifestyle Delivery Systems.

“We’ve seen a fairly significant increase in the amount of capital being deployed into the cannabis industry,” Pakulis said. “In 2018, the U.S. will take a chapter out of the Canadian playbook, and we’ll see an increase in the number of U.S. cannabis entities surpass[ing] the billion dollar valuation mark. And in 2018 those entities may be in California.”

The Number Of Home Grows Will Skyrocket

Chuck Siegel, CEO of BloomBoss, says the popularity of growing weed at home is going to rise significantly in the coming year.

“We expect to see the home grow market more than double in 2018, in the wake of new legalization measures and a shifting focus to craft quality cannabis,” Siegel said. “If we model the home grow market after home brewing, which represents [about] 12 percent of beer production, we can expect home-grown cannabis to represent nearly $3 billion of the market by 2021—and this is likely a conservative estimate, given the financial advantages of growing your own.”

Why else will more pot lovers start growing?

“With the average dispensary price of an ounce of cannabis flower approaching $400 (and rising, as more and more dispensaries open in newly legalized areas and face little pricing competition), it’s easy for consumers to do the math and see the immediate payback horizon of growing their own supply,” Siegel said.

Expect More Legit Products Than Ever

As companies transition out of the gray market, many are upping their game and hiring marketing teams to make sure their brands look legit.

“In 2018, consumers will see more branded cannabis products than ever as mainstream brands and celebrities enter the market with new products,” predicts Sasha Aksenov, CEO of The Blinc Group. “As competition increases, so should product quality and consistency.”

The cannabis market will continue its “maturation” during 2018, according to Bethany Gomez, director of research for the Brightfield Group.

“Long-unregulated or legally gray medical markets, including California, Michigan and Montana, are finally becoming regulated,” Gomez told us. “The ‘Wild West’ that characterized the cannabis industry in the past is quickly disappearing and [a] more transparent, accountable and regulated industry is emerging across the board.

Gomez also predicts that microdosing will continue to grow in popularity this year as newbies and sophisticated consumers “look for ways to use cannabis on a regular basis and still be able to function throughout their day.” CBD, Gomez says will also be a big part of this. “2018 will be the year of CBD,” she predicts.