Jody Hall cornered the Seattle cupcake market with her wildly successful bakeshop Cupcake Royale. Now she is revolutionizing the world of weed edibles. 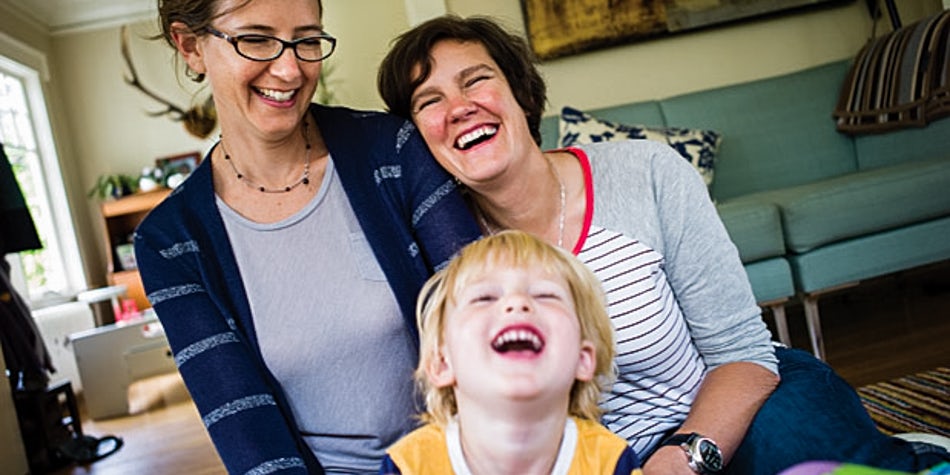 Jody Hall, of The Goodship, lith her wife and child. Photo by Charles Peterson/ Seattle Mag/a>

Applying for a license to distribute or grow marijuana is not usually front-page news. But when Jody Hall submitted her application to legally produce marijuana products in Seattle, the marketing whiz and cupcake maven was overwhelmed with media attention. Before she could tell her wife that she was thinking of starting a cannabis business she was facing calls from bloggers, newscasters setting up shop in front of her six Cupcake Royale storefronts, and trending on Twitter. The Seattle Times ran a cover story asking the question everyone seemed to have: Was the successful Seattle cupcake chain Cupcake Royale about to trade in their sweet innocent confections for pot brownies?

“I thought it was going to be PR devastation, but our employees were like ‘oh my god that’s so cool!’ And our customers are so happy about having a delicious edible that is gonna be reliable and not like oh what am I getting into,” Hall tells me, laughing as she recounts the chaos of those first couple days.

Out of the media, storm emerged The Goodship—Hall’s cannabis-infused goodies business. With a variety of cookies, pastilles, and chocolates for sale in over 100 recreational marijuana stores across Washington, The Goodship has built a reputation for taste-forward edibles that are a far cry from the risky infused products of cannabis lore.

The all-natural, locally sourced product is what The Goodship sells, but it isn’t all that the company contributes. Hall routinely speaks of creating experiences and taking care to create an ethical product.  Front and center on the Goodship’s website, they state their mission: “to provide treats that not only taste great, but fuel enjoyable experiences, and allow you to connect with people and the world in new, meaningful ways.”

Goodship’s commitment to abstract concepts like community and experience appear at first glance like an empty marketing scheme paying lip service to liberal principles like so many weed companies. But not all weed companies have a Jody Hall. Hall has a trail of accomplishments, each more impressive than the next, that inform the philosophy behind her cannabis brand.

When she graduated from Seattle University with a degree in marketing in finance Hall found herself in need of a little extra cash to get Christmas presents for her family and friends.  She started moonlighting at a small coffee chain that had just opened their first location in Chicago called Starbucks.

Jody joined Starbucks when they had 30 stores. Howard Schultz had just bought the company and took her under his wing to help develop a cohesive marketing strategy and create the Starbucks brand.

“I was really a part of shaping the strategy of how we went to market, what kinds of things we supported, how we helped the community, how we got our product out there in unconventional ways,” Hall explains. It was here that Jody learned how to run a business and manage employees.

The culture of collaboration and listening at Starbucks enabled her to use her platform to help start the foundation and give back to the community. She credits the work environment with encouraging employees to build, a lesson that she’s taken with her through her career. When she left Starbucks after 10 years, they had over 3,000 locations.

A 2017 Study by Marijuana Business Daily found that women filled 27% of executive-level roles in marijuana. That’s better than the national average—23%—but lower than it was in 2015 by nine points. Despite being a new industry untouched by the hundreds of years of legalized oppression of women, cannabis is not immune to the sexist business practices that continue to hinder women’s progress.

“It feels a little next level because while there are a lot of great people in this industry,” she pauses mid-sentence, carefully choosing her next words. “I’m not gonna lie. I think in Seattle it’s been a bit easier but I think when you move up to different levels you’re either super loved and it’s great or it just feels like you are invisible.”

The collaborative atmosphere that she enjoyed at Starbucks that emphasized listening, responding and affirming hasn’t translated to the cannabis space.

“I’m in a world where none of those things happen. Ever. So it’s tricky. It’s tricky to have a voice in this industry as a woman.”

As venture capital firms eye marijuana and dip their toes into the 7 billion dollar industry, they bring with them the harmful business strategies that box women out of more traditional industries. Tech startups, where venture capital is king, are famously hostile to women—only 9% have a female executive.

Jody is skeptical of people who want to bring the old way of doing business into marijuana.

“It doesn’t have to be the same old business model. It’s a lot of rich guys who just want to be richer and who don’t care about any of all that stuff. So there’s a mix in the industry. A lot of good people, but a lot of really crazy people.”

Although white men fill the vast majority of executive positions in the cannabis industry, women dominate ancillary marijuana businesses and cannabis test labs—the two most profitable arms of the marijuana industry. According to Marijuana Business Daily women run 63% of labs and 50% of companies that make and sell infused foods.

Jody sees her role in the industry as creating a space to elevate other women. “We’ve got to break through this. I like the resilience that it builds but how do you keep it alive and keep that drumbeat strong.” She takes the opportunities she gets to speak on panels about women in the industry to focus on the ethos of Goodship.

“It’s not just like oh I grow the best pot or I make the best cookie blah blah blah like who cares it’s a commodity. What do you DO? Why do we CARE about you? I just feel like that’s how women think about things naturally.”

Ethos has been a driving force throughout Hall’s career.  After she left Starbucks, Hall opened the first cupcake restaurant outside of New York City. Before Magnolia Bakery was namechecked on Sex and the City, before Martha Stewart put cupcakes on the cover of her wedding book, there was Hall’s Cupcake Royale.

Hall encountered obstacles she didn’t anticipate in the transition to small business owner.

“I noticed I was paying twice as much for half the coverage when I moved from Starbucks to owning my own business and I was like why is that? Why would anyone want to be an entrepreneur when you have to walk away from that?”

She translated this frustration into political action, lobbying the local government for affordable health care for business owners and rallying public outrage. President Obama invited her to speak at the White House. She went on CSPAN to advocate for her causes. She used the platform Starbucks and Cupcake Royale had given her to cultivate relationships with Seattle and Washington politicians and began to fight for a higher minimum wage and marriage equality.

Every step of the way, Jody used her businesses to help her achieve political goals. Cupcake Royale gives 50,000 cupcakes a year to nonprofits and charities. They donated 1$ for every rainbow cupcake sold to Washington United for Marriage.

When she moved into the edibles space it was about more than making a product that tasted good and got you high. “We as a group of businesses can be mindful of how we create a future. I think you can do things with legislators around how the law is implemented especially with people who are sitting in jail for crimes that are no longer illegal.” Beyond these tangible political actions, she hopes to use her seat at the table to influence the culture that cannabis is creating.

“It’s like Michelle Obama and Melania Trump, both are beautiful and can wear designer like it’s nobody’s business but who do you f****** care for? Who do you go to the mat for and who inspires you? We want to be a Michelle Obama. We don’t want to be just a pretty package on the shelves that’s hollow beyond that. We want to have a personality and a style that will stand up for things.”

Through the Goodship, Jody has been able to put this into practice. They host the “Goodship Academy of Higher Education” lecture series where experts are invited to come speak about heady topics under the influence of cannabis. They’ve hosted people like Seth Shostak, an astronomer at SETI who talked about aliens and Tim Keck, the founder of the Onion who talked about fake news.

They funded a group of musicians to go to a haunted lodge that’s been converted into a studio and create music under the influence. They’ve sponsored music festivals and provided edibles to creatives who are looking to make something new. All of these efforts have been a small part of what Jody hopes is a larger movement to change our perception of cannabis.

Jody almost jumps out of her seat as she explains this to me “You have to know that pretty much so much of what we love, what is beautiful—what we listen to, what we wear—was created under a lens in an altered state. Often that altered state was marijuana. Celebrating that we all have creativity and ideas, if we could build a brand that can inspire, we just want to make people happy. We need to be more happy.”

Get 20% off premium weed and discover the latest products, news, and deals in cannabis.
November 03, 2017 — Last Updated
Written by Carolyn Lipka