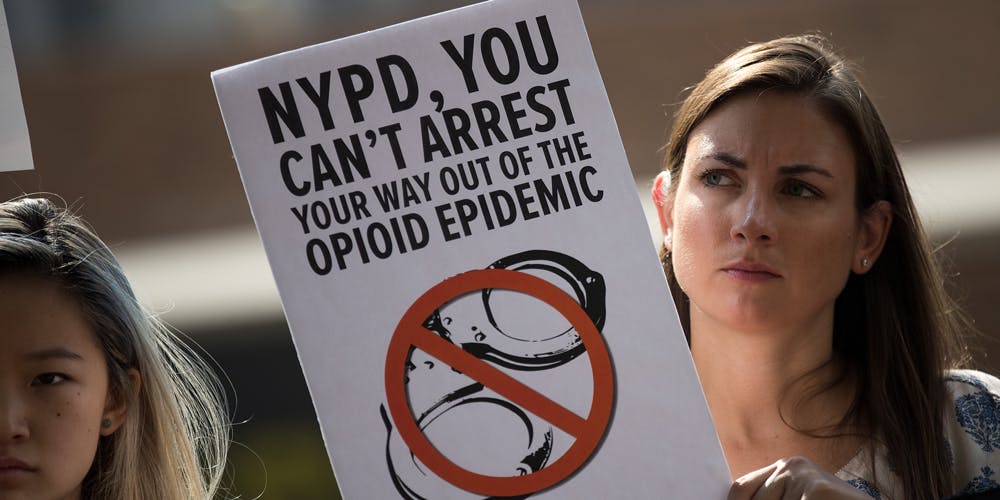 Activists Call For Reallocating Some Of NYPD’s Opioid Crisis Budget To Recovery Programs
NEW YORK, NY – AUGUST 10: Activists attend a protest denouncing the city’s ‘inadequate and wrongheaded response’ to the overdose crisis, outside of the New York City Police Department (NYPD) headquarters, August 10, 2017 in New York City. The group is calling for a more public health focused approach and wants the 70 million dollars allocated to the city and NYPD’s ‘Healing NYC’ program to be redirected to the Department Of Health and Mental Hygiene. (Photo by Drew Angerer/Getty Images)

Opioid overdoses are on the rise in New York.

“We have an opioid crisis and people are dying and this may be a path to keep people from dying and keep them from relapsing,” said Assemblyman Daniel O’Donnell (D-Manhattan), who sponsored one of the bills.

Medical marijuana can be an effective weapon against many of the symptoms of opioid withdrawal, including nausea and anxiety, according to O’Donnell and other supporters of the legislation. Cannabis is also safer than existing opioid drugs such as methadone or Vivitrol.

“Far from being a gateway drug, marijuana is potentially an exit drug for people using opioids,” said Melissa Moore, the Drug Policy Alliance’s deputy state director. According to Moore, a growing amount of scientific research shows access to cannabis reduces both opioid-related deaths and addiction relapses.

At least 11 studies have looked at the effects of cannabis on opioid use for chronic pain. Ten of the studies have strong “positive associations,” meaning more availability of cannabis was associated with less harm from opioids, reports VICE.

Another study, conducted by the RAND Corporation, found medical marijuana availability was linked with reductions in both opioid overdose rates and opioid addiction treatment rates. In states with the best access to cannabis through dispensaries, treatment admissions due to opioids fell by 28 percent. Meanwhile, overdose deaths also fell 31 percent. Like the JAMA study, the effects grew over time.

The bill to add opioid use disorder to the list of medical marijuana qualifying conditions was approved 23-1 by the Assembly Health Committee on Tuesday. A key Senate backer, Sen. Diane Savino (D-Staten Island), also endorsed the legislation.

Savino, who sponsored the 2014 law that legalized medical marijuana in New York, said she hopes the bill can be approved before the current session in the Legislature ends in June. “If we can find a way to help people have productive lives after they’ve been exposed to the horror of addiction, why would we stand in the way?” Savino said.

Sen. Kemp Hannon (R-Nassau County), chairman of the Senate Health Committee, was more cautious. Hannon said he needs more information about how marijuana would be used and the impacts it might have. He didn’t, however, rule out supporting the bill. “I am sure that this is something that will develop as we move along,” he said.

Patients Opting to Use Cannabis Instead

Dr. Julia Artnsten, a professor at Albert Einstein College of Medicine in the Bronx, said at an Assembly hearing this week it appears that patients in medical marijuana states are opting to use cannabis to relieve pain rather than relying on opioids, reports City & State New York.

“Avoiding opioid medication in favor of medical marijuana lowers the risk of opioid overdose either because individuals do not progress to opioid use disorder, or they do not accidentally overdose on the opioids prescribed to them,” Dr. Arnsten said at the Assembly hearing. She added that fully legalizing marijuana would expand access, reducing opioid deaths even more.

New York ranked fifth in the nation in terms of opioid deaths in 2016, according to the most recent numbers available from the Centers for Disease Control. There were more than 3,500 opioid deaths in New York in 2016, nearly 1,000 more than in 2015.