Next:Guides | The Best Delta-9 Gummies You Can Buy Online 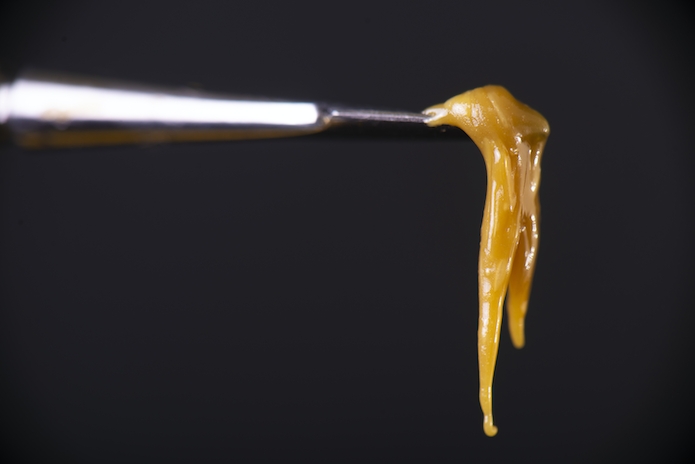 Rosin has been around for a few years now and is increasingly becoming the go-to for many cannabis extract lovers. Why? Well, because unlike other methods that require the use of solvents like alcohol, rosin is an entirely natural and solvent-free extract.

Rosin has been around for a few years now and is increasingly becoming the go-to for many cannabis extract lovers. Why? Well, because unlike other methods that require the use of solvents like alcohol, rosin is an entirely natural and solvent-free concentrate extraction method.

The final product of extraction goes by the same name: Rosin. Similar in appearance to shatter, rosin is meant to be used in similar ways to other extracts like budder, wax, and shatter itself. While still differing in concentrations, appearance, texture, etc.

Contrary to other extraction methods that require solvents, decarboxylation processes, and other pesky little process nuisances, pressing your own rosin has never been easier. You’re only required to own a rosin press… and high-quality cannabis, of course. Some “artisanal” attempts at producing rosin include using a hair iron or clothing iron, which is certainly not recommended if you don’t want to end up wasting that “good stuff.”

Picking a rosin press can be an even bigger challenge than producing rosin altogether. The press you go with will ultimately depend on your production volume goals and the raw material you’ll be extracting the concentrate from (flower, kief, or hash). Which are not always evident until you start experimenting with the process and final product.

The way a rosin press works is quite easy to understand. Simply put, a press is used to squeeze the material between two plates that heat up and distribute temperature evenly through the surface. As this happens, a gooey substance known as rosin will begin to ooze out of the raw material. That’s all it is!

Adequate temperature and pressure vary depending on the raw material used in the extraction process and imperative for high-quality rosin. This is why choosing a rosin press that meets your pressure and temperature requirements is so vital.

A few other things to keep in mind when choosing a product are heat distribution, the plate’s shape, and brand reliability.

Pressure and heat levels have been advertised as a synonym of better-quality when it comes to presses. But more doesn’t necessarily guarantee higher quality rosin. Remember that both of these depend on the raw material you’re using, so higher pressure can hurt your end product’s quality.

For example, you may go overboard with pressure and extract unwanted components like lipids and inert organic particles into your rosin, which is something you want to avoid. Similarly, too much heat may burn your material and damage the chemical composition of the cannabinoids you’re trying to extract.

You just need to make sure that the press you purchase provides enough pressure and heat, rather than MORE pressure and heat. This could save you a couple of bucks and still allow you to yield a high-quality extract. 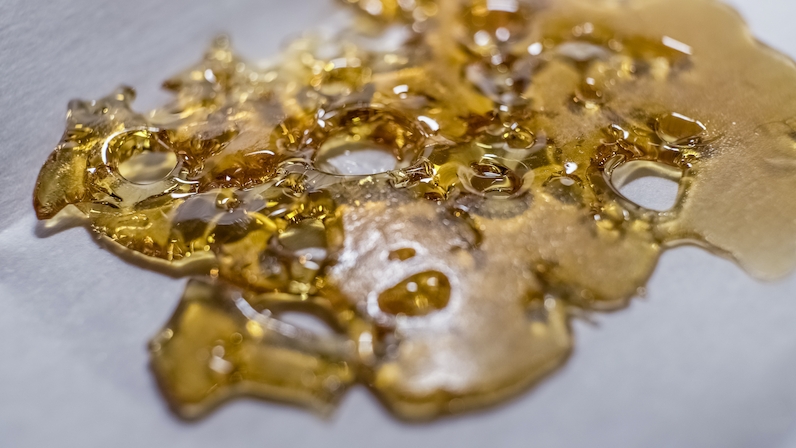 Rosin presses are divided into 6 different major types. All with varying pressure, weight, size, and price ranges. Each one will also vary in volume capacity and the ability to precisely regulate temperature, time, and pressure.

Additionally, each brand will have different inclusions and warranty standards. So, it’s worth keeping an eye out for brand relevant specs as well.

Manual presses generate pressure by using a manual twist mechanism or crank. Manual operation is slow and not suitable for bulk extraction. They are indeed smaller and less powerful than the rest of the items on the list. However, this might be all you need as a DIY user. 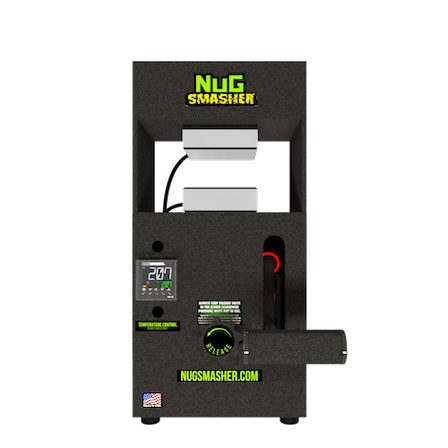 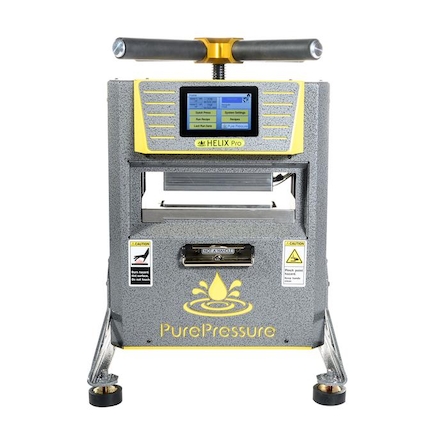 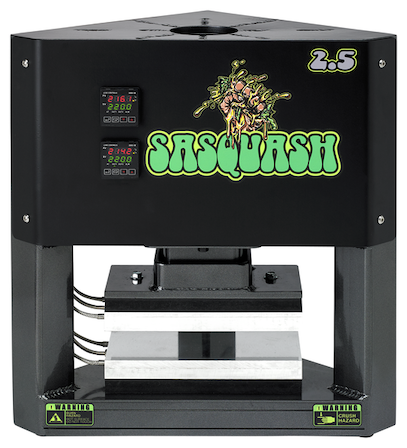 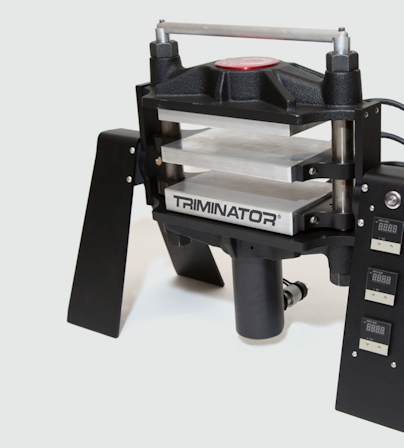 Pneumatic presses operate with a click of a button (like electric presses). No need for pumps and cranks of any kind. However, they need air compressors to operate, making them noisier, larger, heavier, and often more expensive.

Because pneumatic presses don’t require manual operation, they are perhaps the first option you should be looking at for a large and commercial operation. 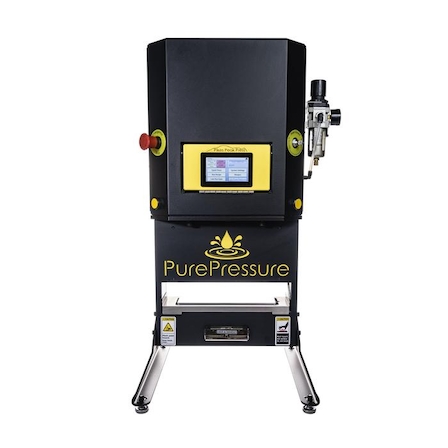 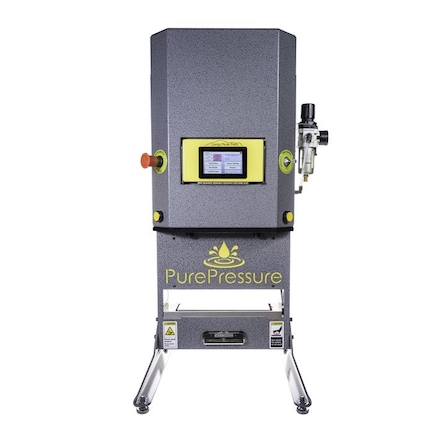 Electric types are the latest innovation when it comes to presses. Like pneumatic models, electric presses also operate at the push of a button, but they are less noisy than their pneumatic cousins since they use an electric pump instead of an air compressor.

However, the pressure they can generate is not as high as that of an air compressor; thus, they are often unsuitable for commercial purposes. Usually, electric presses can handle large quantities but lack the power and reliability that air compressors offer for a large-scale operation. 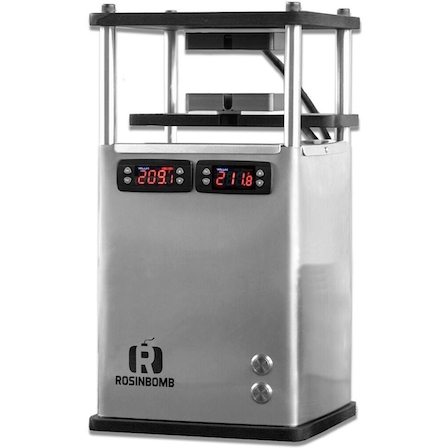 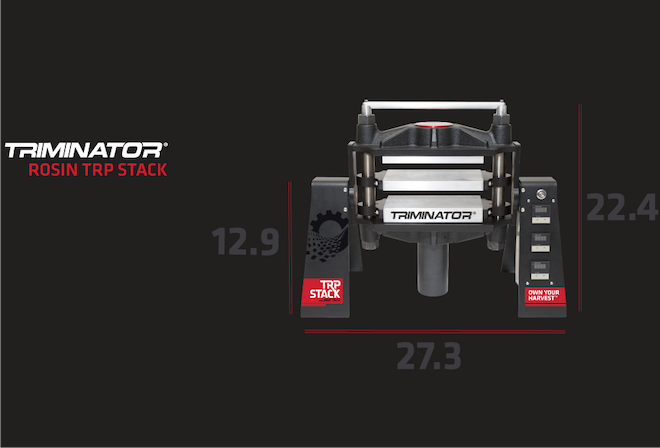 This model can be modified to operate pneumatically with an air compressor. So, no reason for repeating the specs on this one here, but the fact that it made it twice on the list means it’s worth a look!

Hybrids are a “step-up” alternative to manual presses. They use hydraulic cylinders, but they can be controlled with a manual foot or hand pump, pneumatic pump, or an electric pump (depending on the model). This provides flexibility for operation upgrades. Most of these are made to suit commercial operations, they’re often larger than others and provide incredible precision. 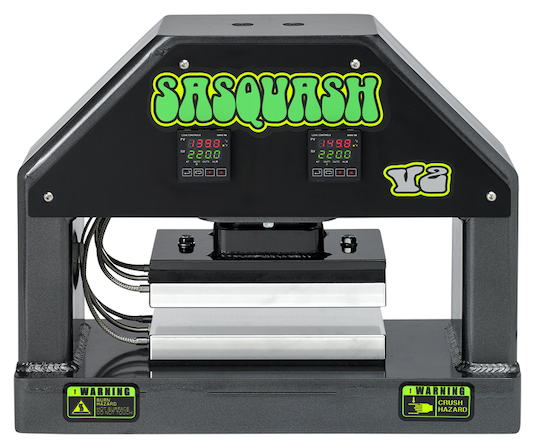 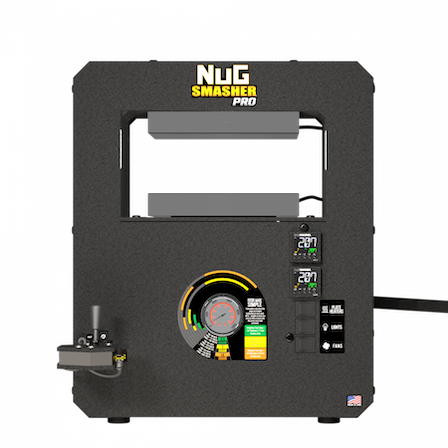 Low-cost presses can be a hit or miss and are usually not the best way to go for experienced “extraction artists”. However, they can prove to be a good alternative for entry-level users. 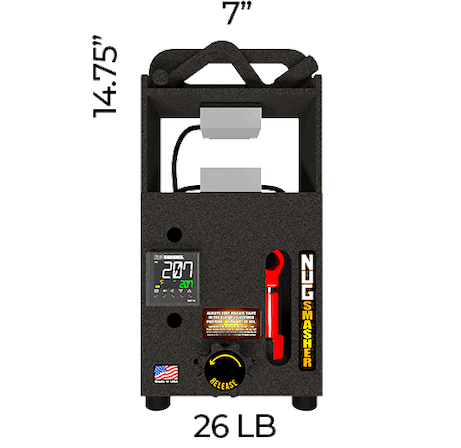 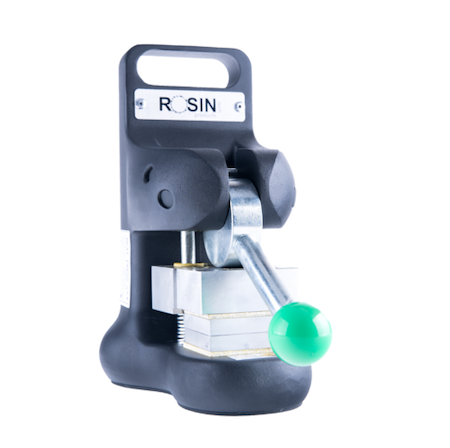 The rosin press you choose to go with will ultimately depend on the amount of material you’re looking to use in a single press, the total volume (size of your operation), and the type of material you will be pressing. Based on these variables, you’ll choose a rosin press that best fits your needs and make all-natural cannabis extracts on your own!