Aquaponics is the Future of Growing Weed

Green Relief is betting that aquaponics is the best method for growing medical cannabis that is healthy for both your body and the environment. 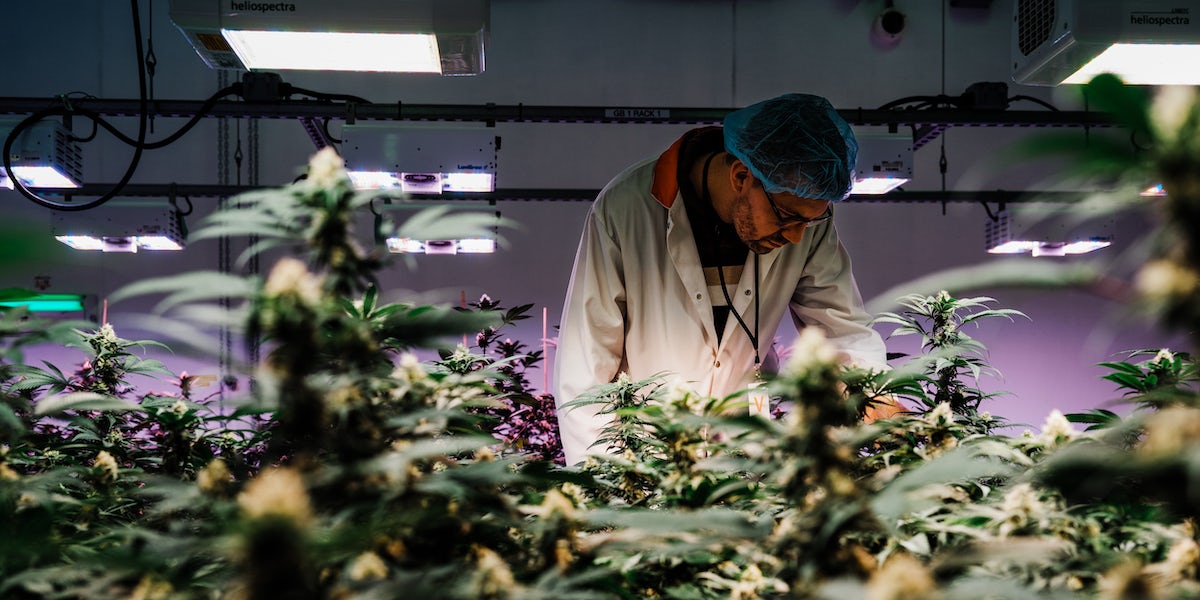 Inside a concrete bunker jutting out of a grassy hillside, magenta lights cast a neon glow above rows of plants. The glassy eyes of tilapia peer out of the windows of fish tanks the size of above-ground swimming pools. There’s the peaceful sound of bubbles surfacing. Then there’s the sweet, sharp scent of cannabis plants flowering, their branches slumping with orangish-purple buds.

Warren Bravo and Steve Leblanc were in the construction business before they set out to build what many believe is one of the most ambitious grow operations in Canada. So ambitious, that their initial plans drew laughter from other growers. “When we told people we were going to be growing cannabis using aquaponics, they said it was impossible,” says Warren Bravo, co-founder of Green Relief.

Aquaponics has been used for years to cultivate robust harvests of vegetables in urban areas pressed for space and water. It’s a method that can convert a suburban garage, an empty parking lot, and maybe one day even a geodesic dome on Mars, into an ecosystem that can sustain both animal and plant life. When Bravo and Leblanc set out to apply this method to cannabis instead of kale, there were no books or videos. No one had done it before on a commercial scale. So they spent two years meeting with aquaponics specialists around the country to learn how to apply aquaponics to growing cannabis. This method presented two initial problems: cannabis has an extremely high nutrient demand in a short time period and requires varied nutrients during different phases of growth.

Aquaponics is the marriage of hydroponics and aquaculture. Like hydroponics, it grows plants without the use of soil. Like aquaculture, it farms aquatic life in a controlled environment. Aquaponics is a closed-loop system where the waste produced by fish is filtered and converted into the nutrients that feed the plants. In return for usable nitrates, plants clean the water for the fish.

“Depending on the size of the operation, there’s a very specific number of fish in a tank. An 800-gallon fish tank, for example, would contain approximately 300 tilapia,” Bravo says.

While it can take up to 12 months for an aquaponics ecosystem to mature and deliver maximum nutrient bioavailability, once it does, cannabis plants grow at a faster rate. This helps to offset the square footage used by the fish tanks that could be occupied by crop rows of cannabis.

Early aquaponics systems were used by the Aztecs who planted crops on small plots of land in shallow lake beds, taking advantage of the endless fertilizer supplied by fish. Their logic was simple: why transport water or fertilizer to irrigate and nourish crops when you could trap it in a closed loop system?

In traditional soil growing methods, water is lost through ground absorption and evaporation. However, in aquaponics, water is only lost by plant transpiration and minor evaporation.

“In fact, we’re using 90% less water than any other agricultural system in the world,” says Bravo.

Recently, the cannabis industry has come under scrutiny for its environmental footprint. According to the Humboldt Growers Association, a single marijuana plant grown using traditional methods consumes up to 22.7 gallons of water per day. In 2015, a study by the California Department of Fish and Wildlife found that stream diversion to water outdoor and greenhouse cannabis grow-ops in Northern California was significantly reducing streamflow, and exceeding streamflow during low-flow periods. It concluded that cannabis is a partially causing creek beds to dry and crack under the California sun. Furthermore, the study stated that cannabis grow-ops were threatening coho salmon and steelhead trout which are federally listed as endangered species. A separate study published in Bioscience in 2015 estimated that between June and October, during peak growing season, 430 million liters of water would be necessary daily per square kilometer of cannabis crop.

“We’re going to see in the next decade, freshwater traded on the commodity index,” Bravo says, “The world is running out of fresh water. We like to think we’re a little ahead of the curve trying to figure this out now, but in the next few years these sustainable methods are going to be adopted on a wider scale than people deem it necessary to do now.”

While Cape Town is the most immediate example, it is just one of many areas facing a serious water crisis. Fourteen out of 20 of the world’s biggest cities are experiencing water shortages, and according to the World Wildlife Federation (WWF), two-thirds of the world’s population will face water shortages by 2025. Inefficient agricultural practices are a major contributing factor, says the WWF.

As Canada legalizes recreational cannabis later this year, it’s vital that licensed cannabis producers take into account how their grow-ops will affect society

According to Statistics Canada, Canadians spent 5.7 Billion dollars on Cannabis in 2018.

Aquaponic growing in many ways echoes some of the core principles of recent health food movements. Like the food campaigns against the unethical means of food production that promote poor nutrition, Aquaponics growers believe that cannabis users should understand how the choice of where they get their bud affects the world around them and their own health.

While cannabis growers used to conjure visions of longhair, tie-dye T-shirts, and gardening gloves, the new era is better represented by disposable booties, polypropylene coveralls and three-piece suits. For many this image is symbolic—will the encroachment of commercial interests lead to worse quality for increased profit margins? While cannabis is known for its mellow culture, not everyone entering the cannabis industry is altruistic.

In late 2017, Tree of Wellness, a licensed producer in Colorado, was forced to recall a huge number of its products. Lab tests determined that cannabis from the company contained traces of a pesticide called myclobutanil. This fungicide is a well known in the agricultural world for its ability to ward off certain mildews, which can devastate cannabis crops.

When burned, myclobutanil emits toxic fumes such as hydrogen cyanide and nitrogen oxides. While the effects are not completely understood, consumers of similarly contaminated cannabis from Organigram in Moncton, New Brunswick reported severe pain and weight loss, among other symptoms. Last year, Organigram issued two voluntary recalls of myclobutanil-sprayed cannabis.

In a study published by Steep Hill, it was discovered that 86% of cannabis clones tested positive for pesticides. While Health Canada will attempt to control the unauthorized use of pesticides through mandatory testing of medical marijuana, testing for pesticides is almost redundant for cannabis grown using aquaponics. You can think of an aquaponics system much like a social contract. Because aquaponics is a closed-loop recirculating system that depends on the health of the fish, you can not spray plants with pesticides without risking the corruption and death of the whole ecosystem you have worked to establish. Beyond contaminated product, Aquaponics also mitigates the risk of contaminated water run off.

Instead, Aquaponics growers like Green Relief use natural methods of biosecurity.

“The plants are very natural; you’re getting all of the natural benefits, you’re not tasting commercial nitrates or mineral salt build up. There’s no harshness,” says Bravo. “People want a natural, non-chemicalized plant and that’s what aquaponics provides for them.”

While Green Relief is currently the only licensed producer on the planet using aquaponics to grow cannabis at a commercial scale, Bravo believes it’s the growing method of the future. The company is currently offering aquaponics home grow kits to eliminate the barriers that they faced when first starting out, to spare home growers the years of experimentation.

“Sustainability in any kind of agriculture is a necessary work for the betterment of our world,” says Bravo.

Currently, Green Relief is constructing a 210,000 square foot building in preparation for legalization and experimenting with oil production.

Enjoy the latest and greatest from Herb, enter your email below to get exciting cannabis updates delivered to your inbox.
May 01, 2018 — Last Updated
Written by Tyler Fyfe