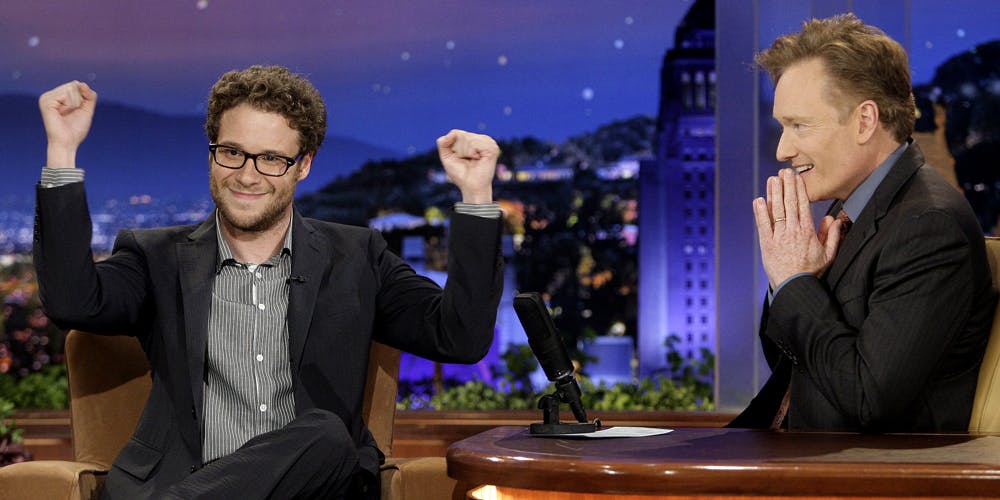 At only 35 years old, Rogen is already one of the most influential movers in Hollywood comedy.

And yet the more he smokes, the bigger he gets. At only 35 years old, Rogen is already one of the most influential movers in Hollywood comedy. Maybe it’s just correlation, but another one of comedy’s biggest names thinks there’s a connection: Conan O’Brien.

The topic was broached a month ago. “Hunger Games” star Josh Hutcherson was on Conan O’Brien promoting “Future Man,” a sci-fi comedy about a slacker recruited by characters from his favorite video game to save the world, namely by preventing a famous scientist from contracting herpes. Seth Rogen serves as an executive producer on the Hulu series.

O’Brien asked Hutcherson what it was like working with Rogen, who guest directed a few episodes. “(I opened) the trailer door,” said Hutcherson, “instantly passed out. I think it was an indica strain.”

“Oh, I thought it was his breath,” replied O’Brien. “Have you noticed there’s a pot theme to everyone you work with?”

“I’m a pot magnet,” said Hutcherson, who also appeared in “The Disaster Artist” as Philip Haldiman.

Josh Hutcherson wasn’t sure if it was such a dandy idea to broadcast that weed seems to be the secret spice to Seth Rogen’s success. “All I’m saying is that he only seems to become more successful the more pot he smokes,” said O’Brien. “That’s the only thing I’m trying to say.”