Human Trafficking in Humboldt Still Hides Among the Cannabis Farms 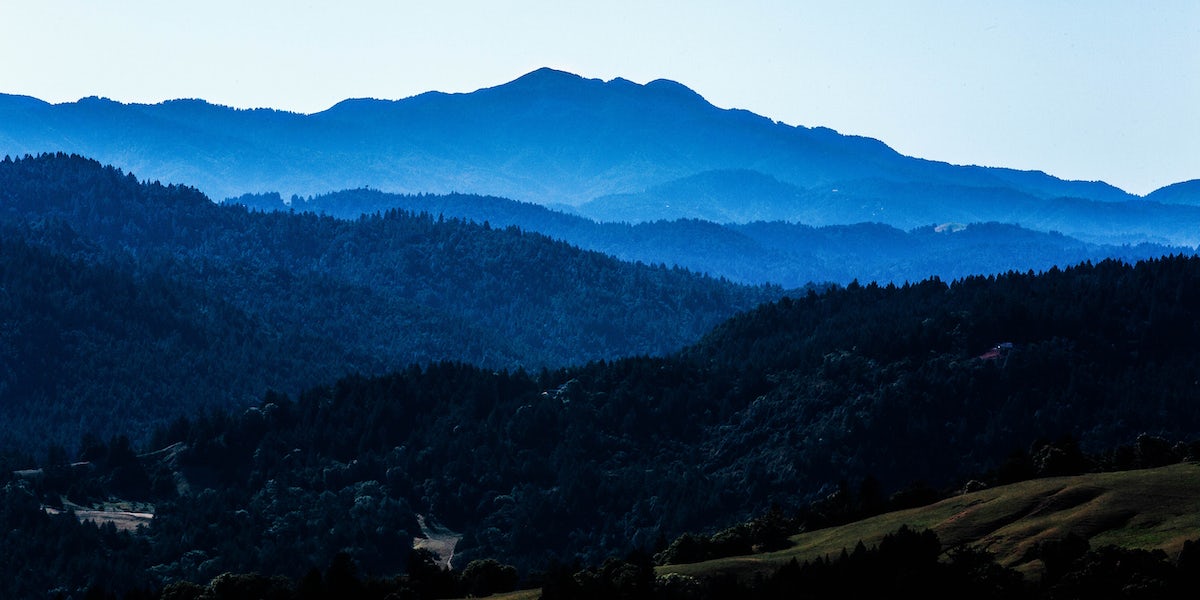 The rolling mountains of Humboldt County, CA on May 12, 2018. (Photo by Martin do Nascimento for Herb)

It’s easy to hide in the Emerald Triangle. Up in the hills, amidst the redwoods and misty fog, where cell service fails and back roads lead to the middle of nowhere, cannabis cultivators have spent generations growing weed under the radar. At the same time, characters far seedier than the simple grass folk have taken advantage of the region, much of which operates in the shadows of the law.

Drug trafficking—which can include cannabis—and human trafficking tend to go hand-in-hand. In a county like Humboldt that’s more than three times the size of Rhode Island, but has less than a seventh of the population, civilization is so sparse that it’s hard to see what’s going on—at least without a helicopter.

“I grew up in Northern California and saw the impact of the Drug War on my community and personal life,” says Lelehnia Dubois, Humboldt County human rights commissioner and founder of Humboldt Grace, LLC. “A lot of that was negative impact, from sexual exploitation to abuse to all sorts of things that happen when you grow up in a culture that has to hide itself.”

Human trafficking in America has existed alongside drug trafficking from the get-go, but in some cases, says Dubois, it’s slid into the cannabis space like a leech. Up in Humboldt, in particular, the suspicious activity can be nearly impossible to identify. “The homes, not all, but what we call grow houses look very much like what a human trafficking house could,” she says. They’ve got closed curtains all the time, very little in-and-out traffic, trashy and worn on the outside, vans parked out front, and a cycle of strange people at certain times.

The trafficking in Humboldt comes in many forms, ranging from child pornography to prostitution to forcing a female trimmer to work topless. According to the Polaris Project, an anti-trafficking nonprofit: “All trafficking victims share one essential experience: the loss of freedom.” Traffickers use coercion, deception, force, or violence to recruit, harbor, or transport victims for exploitive purposes, such as labor, sex, domestic servitude, organ removal, and so forth.

The International Labour Organization estimates that 75 percent of human trafficking victims worldwide are women and girls. Domestically, California human trafficking outnumbers any other state when it comes to reported cases. In 2017, the state had 1,305 cases, followed by Texas at 792. In Humboldt County alone, 429 people were reported missing—proportionately, over three times more than in a major metropolitan area like Los Angeles County.

Following an investigation by Reveal News in 2016, there have been a few remedies to combat trafficking in Humboldt. The major victories include the shutdown of Backpage, a top sex trafficking site that had been under a long investigation, as well as a legal shield provided to child “prostitutes,” with the understanding that a minor cannot choose to be a sex worker. The community also founded a sex worker hotline. However, human trafficking in Humboldt continues to be a problem, and among the most underreported crimes after child abuse, rape, and spousal abuse, says Humboldt County Sheriff William Honsal.

“Human trafficking in Humboldt continues to be among the most underreported crimes after child abuse, rape, and spousal abuse.”

Most cases go unreported because victims are afraid to come out, fearing backlash from their oppressors or consequences from law enforcement for engaging in illegal activities like trimming black market cannabis. It’s because of this, investigator Scott Hicks with the Humboldt County Sheriff’s Department tells Herb, that local police “have no clue what the actual numbers are.”

“There is definitely a fear [of reporting] out there,” he says. “That’s the way they control them.”

If law enforcement discovers a victim, Hicks says, their safety takes priority over a police report. “If someone is up there trimming marijuana and they’ve been repeatedly raped, no, we’re not concerned about the marijuana,” he says. “We’re concerned about the violence and the trafficking issues.”

Nonetheless, victims’ fear of getting the cops involved led Dubois to become a confidante for many of them. Because of her life’s work in the community and experience as president and chair of California Cannabis Voice in Humboldt, she heard stories from victims that they wouldn’t tell the sheriff or anyone else for fear of being ostracized by the cannabis industry for snitching on bad players.

“I heard a story from two women who came here from England, [having] heard that this is the work play destination of the world. They were trapped on a mountain for two weeks, stun gunned if they didn’t take off their clothes and dance into the evening,” she recounts. “The money around cannabis has really shifted these Northern California communities, and human trafficking has really grown under that shift.”

Existing side by side, if not overlapping, cannabis and human trafficking in Humboldt form something of a Venn diagram. In some cases, like child pornography, traffickers have nothing to do with cannabis. Other cases, like forcing “trimmigrants” into sex or labor, involve bad actors in the weed scene. They lure travelers from around the world, with hopes of making up to $300 a day at the rate of say $200 a pound during the summer and fall harvest seasons.

A lot of human trafficking in Humboldt is also tied to missing persons, says Hicks. “There have been instances where people have been straight up kidnapped and forced up to the mountains to trim, put in the back of trucks or vans with blindfolds on, willingly.”

Naive trimmers buy stories from cagey farmers about the necessary secret of the garden’s location for “fears” of getting robbed or discovered by the cops. People end up having no clue where they are and with few if any neighbors around because it’s so vast.

Nonetheless, because the trafficking in Humboldt is so underground, very few cases have been uncovered. And Honsal anticipates human smuggling could increase to support the need for free labor as the price of cannabis continues to drop post-legalization. At the same time, however, he says legalization could help deter trafficking in Humboldt as more state regulators show up on farms to make sure they’re in compliance.

Meanwhile, while trimmers or laborers may be forced into sexual activity, other forms of sex trafficking in Humboldt are totally distinct from the cannabis industry, even if in some cases, they’re marketed to farmers. For example, pimps may prostitute women in the towns, catering to farmers who come down from the hills to buy supplies or have a weekend off, Hicks says.

“Some cases of sex trafficking in Humboldt involve trimmers buying stories from cagey farmers. Others have nothing to do with the cannabis industry.”

In other cases, however, sex trafficking in Humboldt targets children. Sister Star was seven when her grandfather took her from Weaverville—a small town in the Emerald Triangle—to Los Angeles, drugged her, took photos of her, and then took her back home. Then six weeks later, a Jehova’s Witness sister from Redding picked her up, drugged her with a lollypop, and dropped her off at a hotel in Eureka, Humboldt’s main city, where a group of three men filmed and sexually abused her.
Sister Star’s grandfather had introduced her to a prominent owner of a large fast-food chain, who she believes paid him to traffic her into child pornography. Jehovah’s Witnesses were involved, too, she says, since her family belonged to the sect.

Much of Sister Star’s memory of her childhood abuse had faded until she suffered a stroke at the age of 38 and was able to remember it in full. “No doubt in my mind the trauma was so severe, all the abuse I’ve experienced from birth inside the Jehovah’s Witness organization and how they treat children, my brain literally shut off,” she says.

Since recovering from her stroke, Sister Star has joined the Sisters of the Valley, better known as the nuns who grow cannabis. She also hosts local “dance time therapy” sessions in Arcata, where she offers reiki, massage, meditation, and other healing arts.

Star’s story is one of many, indicative of an issue so camouflaged yet pervasive in the Emerald Triangle. Initiatives like EPI (Empower, Protect, Invest)—initially founded after a mission trip to Thailand in 2015—aim to fight denial and provide education about the dangers of trafficking. It offers curriculum training for children, parents, and teachers for children in elementary through high schools to help prevent human trafficking.

“To become a victim, what they prey on specifically is insecurity and low self-esteem,” says Heidi Messner, who leads EPI in the Humboldt town of Eureka. Traffickers are very patient, she adds, and often put in up to nine months grooming a victim, coercing them, or otherwise convincing them they’re operating at their own will. “It’s a manipulation game,” she says.

At this point, education like this seems to be the main solution put forth by the community and local officials to stop the trafficking in Humboldt. Even law enforcement rely on training to recognize the signs, Honsal says. The sheriff’s office participates in a task force called CSEC (Commercially Sexually Exploited Children), facilitated by the Department of Health and Human Services, in order to address sex trafficking. And in January, the rights for sexual assault victims were expanded, with medical exams becoming more available and helping to track DNA samples. Meanwhile, says Dubois, ER doctors need to be able to distinguish the signs between someone who’s dealing with drug abuse versus severe PTSD and to become better at identifying why a woman has blacked out.

Dubois is a Humboldt County Human Rights Commissioner. When Game Over brought it to the commision, Dubois took it on as a county official. She recently had a $20,000 fund approved by the county known as the Human Trafficking Fund. The fund will consolidate information and data which will inform local education initiatives.

As the Chair of the Human Trafficking Committee, Dubois recently determined additional needs in the areas of education, data collection, research, awareness, and participation from survivors. Prevention is important but equally important, advocates say, is putting a structure in place for people to heal.

“It’s about what we can do to help victims become real survivors,” says Messner. “A victim is one thing, but a survivor moves beyond it into a place of wholeness and can live life to the fullest.”

Enjoy the latest and greatest from Herb, enter your email below to get exciting cannabis updates delivered to your inbox.
August 29, 2018 — Last Updated January 08, 2020
Written by Madison Margolin