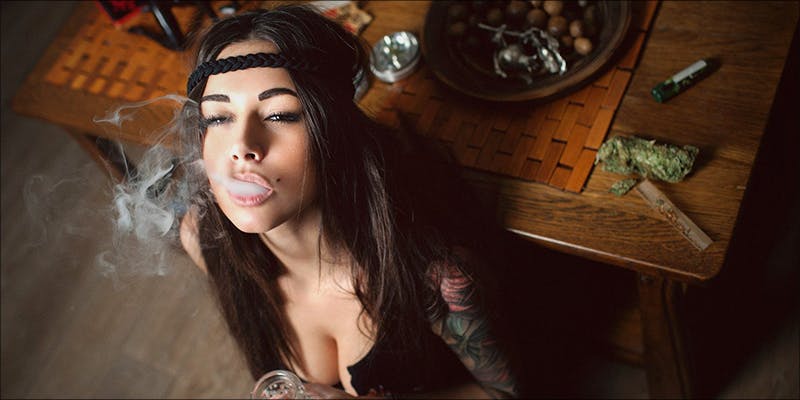 Recently, KINDLAND conducted a survey of women to determine how guys react to lady smokers, and their responses are amusing, and just a little shocking.

It’s 2017 and men, children, women, and even dogs are benefitting from this fantastic plant you know as cannabis. And believe it or not, dogs aren’t the ones receiving the strangest reactions from people when they find out they get down with the ganja. Nope, it’s women. For some reason or another, men have a lot to say about women who smoke pot. Recently, KINDLAND conducted a survey of women to determine how guys react to lady smokers, and their responses are amusing. Here are 21 things that men say to women that smoke weed.

I dated a guy who told me I was lazy because I smoked weed. He was literally the laziest person I’ve ever met. He bought a turtle and named it “Bothered,” as in, I can’t be bothered to take care of it. It died two weeks later. – Carlie Mantilla, 31, Comedian

My ex-husband didn’t like how I behaved while high. I think it’s mostly because I paid him less attention and was actually happier and more confident. Any laziness I ever displayed was due to spoiled, millennial depression (mostly about my relationship with him) and not to cannabis.

Now? I dab, go to the gym, clean my house, and write 20 jokes. Tell me you can do that drunk or on Xanax. I get shit done. The fact that I smoke heavy indicas at night was confounding to my ex.

‘Why can’t you just like, get sunlight, maybe workout, go to sleep naturally?’ He’d demand sleepily as I toked before bed. I did all of those things; they don’t stop the noise. Only mother nature’s caressing touch of cannabis can do that for me. – Adrienne, 32, Comedian and Writer

Usually guys who bring up weed to me on a date want to test the waters and see if I’m down to smoke with them. That’s always chill on both parts.

Once, I went out with this presumptuous vegan guy. He was saying how he didn’t drink or smoke and how as vegans we were just both on a different wavelength from people who needed to engage in that and alter their natural selves. I found that pretty amusing.

I didn’t even bother to tell him that I definitely engage in some recreational “altering,” but I left it at the first date. – Courtney, KIND Intern

I briefly dated a guy in college who when I got sick and lost my voice over Christmas break told me that I should ‘”probably stop smoking so much weed.”

I told him he should probably stop texting me. – Megan Crandell, Social Media Manager

5. The future is green

I’ve heard: “You’re ruining your future every time you smoke weed.” PSHHAHAHAHA. Cannabis is my future, and THE future of holistic healing. – Roxanne Dennant, 29, Owner of Fruit Slabs

One time a guy I was fucking was pretty shocked I rolled a blunt in the morning. Other than that, either no one can tell, everyone loves it, or they’re all just keeping their mouths shut. I don’t get a lot of feedback regarding how stoned I am all the time. – Lindsay MaHarry, 27, Writer

I’m not a big pothead; so I don’t think they’d even know to bring it up. When it has come up and they don’t smoke, it’s usually a non-issue. I don’t think I could realistically be with someone who had a thing AGAINST weed. Now that I think about it, I usually date pretty serious potheads. Hmm. – Dani, 30

8. That chick from Weeds

“ have not gotten any negative comments as I mostly vape in private. That said, what I consistently get, which has become so cliché, is “Oh, you are like that chick from Weeds. You are just like her!” Hm, ya,… well not really. – Pamela Hadfield, Co Founder of HelloMD

Men have said that I’m lazy and I’m slow and my memory is fucked. But I’m pretty active regardless of my smoking. Also, many still have the misconception that it’s a narcotic so therefore you’re a delinquent when many, me included, use it for its medicinal purposes. – Calina, 22, College Grad

I love when a man says to me “Oh! You smoke weed?! For real?!!!” Like its some terrific taboo that as a woman, I smoke A LOT of weed. My favorite thing to do in such a situation is to educate that weed, or cannabis, is highly (pun intended) medicinal and women have been using it since the beginning of time to help their ailments.

Queen Victoria is always one of the best examples since there is so much evidence about her use of cannabis. – Roxanne Dennant, 29, Owner of Fruit Slabs

That I don’t know how to roll a joint and need the concept of consuming marijuana mansplained. – Lindsay MaHarry, 27, Writer

I don’t date strangers or guys who don’t smoke weed. Most people seem to assume I smoke based on appearance; so it’s never really come up. – Lindsay MaHarry, 27, Writer

14. Too precious to be a pothead

It hasn’t happened! When I first got into weed pens (and was smoking a lot more casually), a guy I was seeing said, “OH NO! DON’T BECOME A POTHEAD LIKE ME! YOU’RE TOO PRECIOUS!: I just gave him a -_- face. – Dani, 30

The worst thing pretty much anyone has said to me was by my ex-husband as we strolled through the streets of Amsterdam in the early 2000s.

I walked by a cafe and slowed my pace a bit to inhale the sweet smell of pastries and cannabis, only to have him stop, turn to me and say, “Jesus Christ, you’re a fucking addict. This is going to ruin your life – our life – forever!” I should’ve known then he wasn’t the one for me. Said by a man who would become a different person when drinking four or more beers.

I had choked back tears, believing that I was an addict, and stayed sober for the five years of our relationship. They were some of the most miserable years of my life. – Adrienne, 32, Comedian and Writer

The more machismo inclined ones are the worst. Weed is no different than sports in their mind; it’s a man’s game. Just like a girl will get grilled on batting stats the second she mentions she likes baseball, these guys will try to prove you a fraud, try to discount you by grilling you on ridiculous stoner minutia.

“Oh, well you said you like weed, sooo how much do you smoke a day? What strains are you favorite? How much THC is in those? Where is it grown? Who is the third cousin of the dispensary owner? See, I knew you didn’t really smoke that much. – Whitney Bell, Owner of Kiddbell

Guys who smoke weed are generally pretty excited by my weed smoking. Guys who don’t smoke weed don’t love it because I do it a lot. As for stereotypical stuff, maybe just asking if I’m high when I do something dumb or am being weird at a party. – Lindsay MaHarry, 27, Writer

Not really. My boyfriend thinks it’s sweet that I take tiny puffs – he knows I’m sensitive. But he’s never patronizing about it. – Dani, 30

I had a big group of guy friends freshmen year of college. We all used to hang out and smoke together. One of my friends was complaining how he needs to take a tolerance break because he smoked so much he was barely even getting high anymore. My other guy friend said, “Yea, we’ve all been there. I mean, except for Courtney.”

I’d only known these guys for a few months, and we all smoked together regularly. He knew nothing about my life or history before then and not too much about the other guys’ lives either. I guess because I’m a girl and not some typical burn-out personality, he assumed I couldn’t be a true stoner. – Courtney, KIND Intern

My favorite is when men make the assumption that because I’m small and a woman that I must smoke “weak” weed. I actually have a really high tolerance and prefer to smoke heavy indicas. The other thing I get a lot is that I “don’t actually know anything about weed” because I’m a woman. (Surprise, I probably know more than you, dude!)

I think the misconception that women who work in the cannabis industry are only there to be eye candy is the most offensive thing I’ve been told about my involvement with cannabis.

There’s been a pattern of sexism in the cannabis industry for a long time; so I consider myself lucky to work somewhere that actually empowers women to be leaders in this industry. Obviously there’s still a few men who come in and say that they’d prefer for a guy to help them, because for whatever reason they perceive men as knowing more about cannabis.

But it’s those men who are missing out on my knowledge; I’m not missing out on anything by not interacting with someone who doesn’t value my input and intelligence to begin with. – Megan Crandell, Social Media Manager

I dated the President of a fraternity at UVA my freshman year of college. And I didn’t go to UVA so whenever I went to visit, I always went with my stash. This fraternity happened to be the number one ranked fraternity for academic scores.

The majority of them did NOT get down. And his roommates especially did not love the loud smell of my weed every weekend I came in. A few weeks into our “relationship” he asked me if I would ever stop smoking weed….

I remember looking at him, pausing, and busting out with laughter with a very convicted, “NO! Dude, this is my medicine. This is what helps me get through day to day.” I tried to explain it helped with anxiety, the pain from a recent knee surgery, and my menstrual cycle. He just couldn’t get past its status as a Schedule I drug.

Sorry you can’t understand all of its benefits because you’re blinded by the government saying it’s illegal and thus bad for you. Sorry, bud, this relationship isn’t going to work. – Roxanne Dennant, 29, Owner of Fruit Slabs