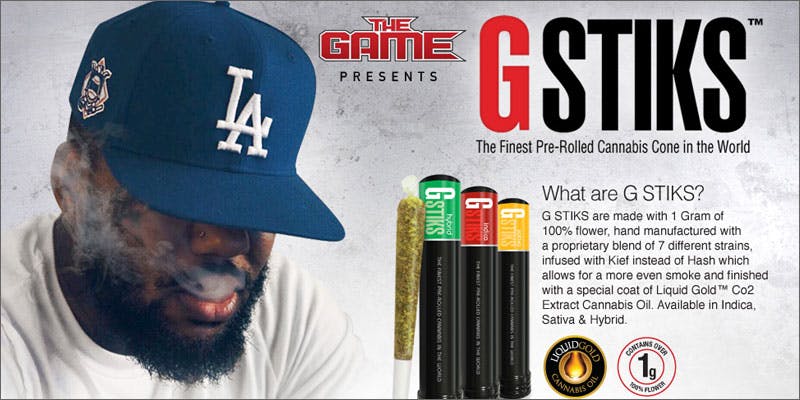 These 2 new products from the musician and G FarmaLabs will kick-start the beginning of your summer.

Famous rapper The Game has officially announced a partnership with G FarmaBrands to produce G Drinks and G Stiks. G FarmaLabs has a great selection of cannabis products and they believe The Game will bring 2 of their new products to the masses.

The three flavours that will be in Washington and California  include original, strawberry, and pink lemonade. All of the varieties will include 100mg of THC which they are branding as “Liquid Gold Cannabis Oil” and they claim it is very high-quality oil. The strain used in the drinks is held a secret, but they do specify that it is a hybrid species. All three flavours will cost thirteen dollars and should give a lasting high of around 4-6 hours.

G FarmaLabs has been very optimistic about the business deal they have put forward with The Game.

“As an award-winning recording artist, star and icon, The Game embodies the true spirit of the marijuana culture,” said Ata Gonzalez, founder of G FarmaBrands. “He understands the plant and is a firm believer in us as a company and our dedication to setting the industry standard through quality and innovation.”

The Game is also very excited to begin his career as a product figure/endorser in the marijuana industry.

“These guys are the pioneers of innovation in the cannabis industry,” said The Game of G FarmaBrands. “I’m excited to help raise awareness for G Stiks and G Drinks in all territories that we are available.”

These awesome pre-rolled joints are advertised as being a high-class cannabis product because of 3 proprietary components. The first being the use of a whole gram of the G Stik secret strain blend of marijuana, next they include a generous sprinkling of kief throughout the joint. And finally, the cherry on top is the same Liquid Gold Cannabis Oil that is used for the G Lemonade. Will this be enough to back up their claim of ” The finest pre-rolled cannabis in the world?” For twenty dollars in California and Washington, you and your friends will have to try this out! The joints come in 6 different variety’s that differ based on the strains that are incorporated. For more information on The Game’s new products, you can head over to his website here.

What do you think of these new products? Do you think you’ll try one of them out from your dispensary? Let us know on social media or in the comments below.