89 hospitalized and 2 dead in Illinois after using synthetic marijuana 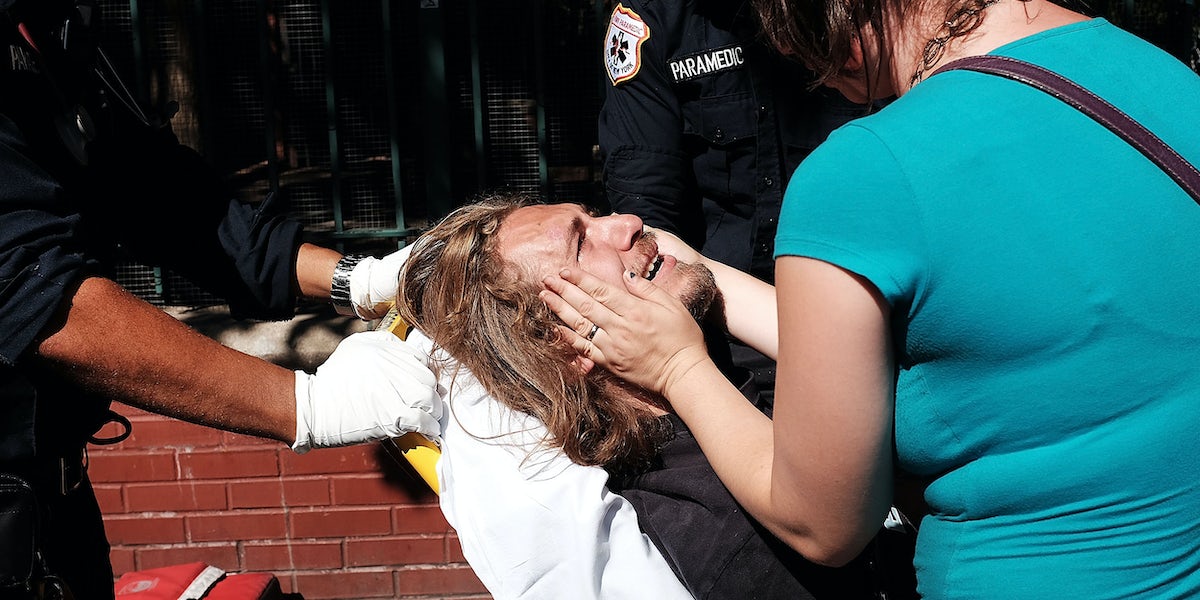 NEW YORK, NY – AUGUST 28: A man is consoled as paramedics take him to the hospital for what is thought to be an overdose of K2 or ‘Spice’, a synthetic marijuana drug, along a street in East Harlem on August 28, 2015 in New York City. New York, along with other cities, is experiencing a deadly epidemic of synthetic marijuana usage including varieties known as K2 or ‘Spice’ which can cause extreme reactions in some users. According to New York’s health department, more than 120 people visited an emergency room in the city in just one week in April. While the state banned the ingredients used to make K2 in 2012, distributors have switched to other ingredients and names in an attempt to circumvent the law. (Photo by Spencer Platt/Getty Images)

As of Thursday, April 5th, 89 people have been hospitalized in the city of Chicago and surrounding neighborhoods after ingesting synthetic cannabis known as K2 or Spice, according to the Illinois Department of Public Health (IDPH).

Among the patients admitted for treatment, the largest numbers came from Chicago (24) and Peoria County (24) all of which experienced severe bleeding when they were admitted. The IDPH has reported two deaths since March 30th, with the first reports of poisoning beginning on March 10th.

At least nine patients have tested positive for a substance known as brodifacoum, a chemical used in rat poison, with symptoms including nosebleeds, blood in urine, coughing up blood and bleeding gums.

Synthetic cannabis is a man-made chemical compound designed to act on the cannabinoid receptors and is sprayed onto plant material to mimic the real thing. It can be smoked or vaporized just like real cannabis but is considered to be far more dangerous due to the unpredictability of its contents.

“We continue to see the number of cases rise,” IDPH Director Nirav D. Shah said in a statement on April 2nd. “IDPH is continuing to work with local health departments and the Centers for Disease Control and Prevention, along with other partners, to try to identify common products. Without more information, IDPH does not know how much contaminated product is circulating or where.  We strongly urge everyone not to use synthetic cannabinoids.”

According to local reports, treatment for those who have been poisoned by synthetic cannabis is available so long as medical attention is sought. Local health officials have told reporters that those seeking treatment will not face prosecution.

While police are still investigating the origins of the substance which has hospitalized dozens across the state, three people were charged by the U.S. Attorney’s Office on Monday, April 2nd for selling synthetic cannabis from a convenience store on Chicago’s West Side.

The three men were arrested after undercover officers managed to purchase the substance from the store owners and preliminary testing of the substance purchased found that it contained brodifacoum.