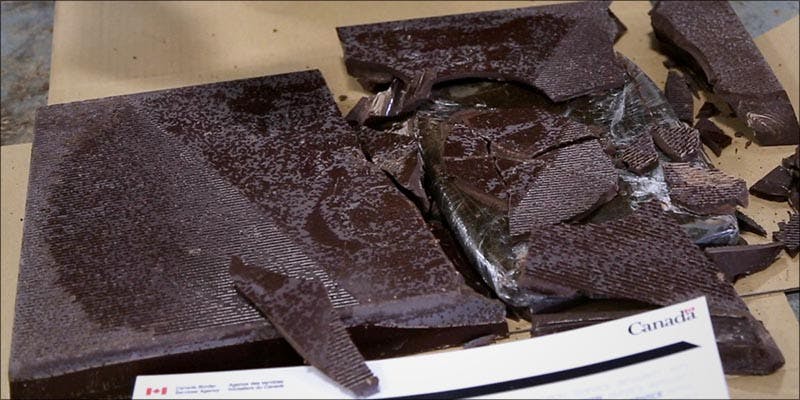 Anomalies in an X-ray image led to a closer examination by border agents that involved one bar of chocolate, and a rubber mallet.

If you’ve ever wondered how smugglers try to smuggle in hash into Canada, well, wonder no more, as Canadian authorities have broken a smuggling ring… and a whole lot of chocolate.

Last Thursday, while checking a container that was bound for Ontario, the Canadian Border Services Agency (CBSA) noticed some anomalies in an X-ray image of the shipment that was declared chocolate.

On closer examination, the officers for the Canadian Border Services Agency discovered that it wasn’t just chocolate – each contained 4.4 pounds of hash. That closer examination involved one bar of chocolate, and a rubber mallet, which uncovered the cellophane package containing hash.

Once discovered, the Royal Canadian Mounted Police were brought in, who started an investigation. That led to the arrest of an Ontario man, Owen Jagasar, who was charged with the importation of a controlled substance, possession for the purpose of trafficking and two counts of conspiring to commit an indictable offense under the Criminal Code. If Jagasar is convicted, he could face up to 40 years in prison.

For the Canadian Border Services, it’s just business as usual, since the agency is used to finding almost anything hidden in the most bizarre of places. Calvin Christiansen, the Regional Director of the CBSA’s Atlantic region, reiterated that it was par for the course, saying “We find all kinds of things hidden in all kinds of things.”

But what was unusual was the size of the bust, since the Atlantic region normally only discovers small amounts of hash, and definitely not hundreds of pounds.