“They’re killing people and their motive? It’s all for financial gain,” said one DEA investigator about the drug company that struck a deal with federal agencies. 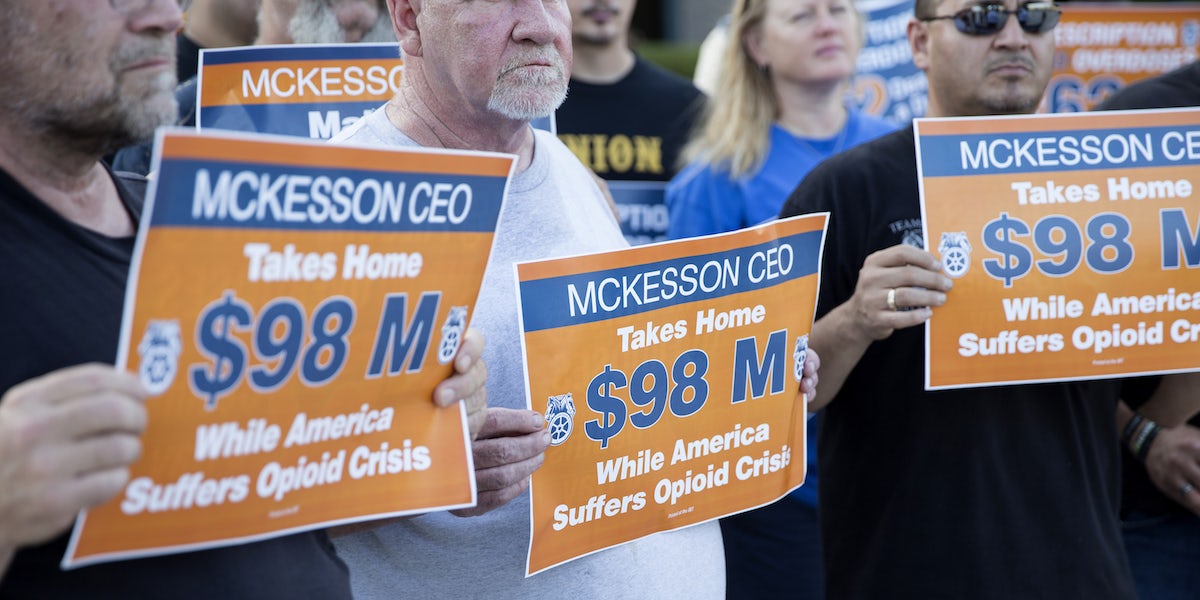 2017. McKesson Corp. investors opposed the company’s executive compensation plan after a public vote-no campaign by the International Brotherhood of Teamsters, which accused the drug distributor of aggravating the opioid epidemic. (Photo by Laura Buckman/Bloomberg via Getty Images)

After a two-year investigation into McKesson Corp, one of America’s largest drug distributors, the DEA was hoping to finally bring some of the people responsible for the opioid crisis to justice. Investigators sought a $1 billion fine and a suspension of distribution rights against the company for not reporting suspiciously large orders of their drugs.  But according to the former head of the DEA’s Denver field division, David Schiller, squeamish politics and fearful lawyers got in the way.

“It was a national problem and nobody wanted to deal with it,” Schiller told 60 Minutes, “They’re killing people, and their motive? It’s all for financial gain.”

The case fell apart in Washington when the federal government began negotiations with McKesson. The deal struck between McKesson and lawyers at both the DEA and Department of Justice in early 2017 would see the fine reduced to $150 million while also allowing the company to continue operating in the communities that were flooded with drugs.

McKesson Corp, like all drug distributors in the country, serves as the middle-man between pharma companies and healthcare providers. They’re basically the Costco of prescription drugs, taking bulk orders from pharmacies across the country. And in a sense, they are the closest thing to a legal drug pusher in the U.S. At the height of the opioid epidemic, companies like McKesson were responsible for supplying medical professionals with the drugs that spurred the crisis—and they did so on a massive scale. In West Virginia, one of the hardest hit states, distributors shipped 780 million pills to local pharmacies in just six years.

McKesson is the largest drug distributor in the U.S., with 30 distribution warehouses around the country and revenue to match oil giants like Exxon-Mobile. They also have a shaky reputation when it comes to following regulations, which is what brought the DEA to their doorstep.

Federal law demands that distributors like McKesson report any unusually large or frequent orders they receive and hold those orders back until they can be investigated. The only snag in that system is that McKesson gets to decide what an unusually large order is. According to the DEA’s investigation, whenever the distributor came across such an order, the company simply raised the numbers on the maximum allowable shipment.

As part of a joint investigation by The Washington Post and 60 Minutes, it was discovered that of 1.6 million orders made from the small town of Aurora, Illinois between 2008 and 2014, only 16 were reported to the DEA. What’s more, McKesson only reported these cases after the DEA had begun to investigate.

And that’s only where the trail of evidence begins. According to government documents obtained by the Post and 60 Minutes, McKesson also supplied convicted drug dealers from pharmacies in Ohio and Michigan.

Investigators were sure that this case would go their way, especially since the investigation was sparked by the companies’ shady past. In 2008, McKesson was ordered to pay a fine of $13.5 million for the same lack of oversight on suspicious orders of hydrocodone, a highly addictive painkiller, from online pharmacies.

“This is the best case we’ve ever had against a major distributor in the history of the Drug Enforcement Administration,” former head of the DEA’s Denver field division, David Schiller, told 60 Minutes.

Schiller has since retired from a 30-year career with the DEA and has come forward to express his anger with the outcome of the case. And he is just one of the investigators who believes it was the government’s fear of big pharma that botched the outcome. He claims that each time a hard-line stance was taken against McKesson it would receive pushback from government officials who suggested targeting smaller companies instead.

In the end, McKesson maintained all of its DEA registrations which allow it to distribute, including contracts to supply Veterans Affairs clinics.

“In the height of the epidemic, doesn’t somebody need to be held accountable?” Schiller tells CBS’s Bill Whitaker, “Nobody’s in jail, they wrote a check.”

McKesson did not respond to a request for comment.

Get 20% off premium weed and discover the latest products, news, and deals in cannabis.
December 19, 2017 — Last Updated
Written by Miroslav Tomoski