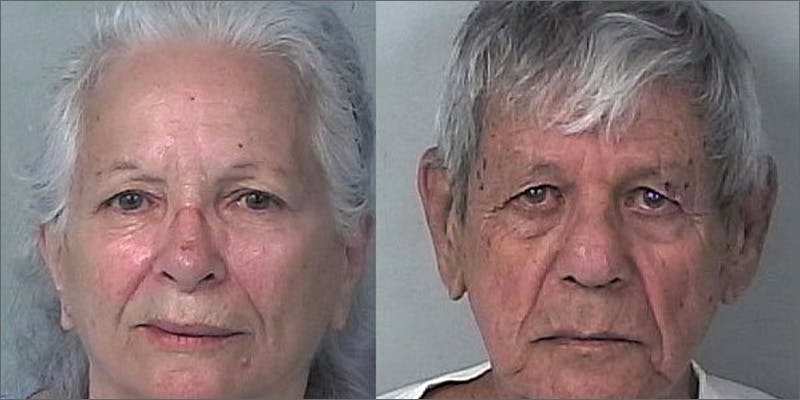 An elderly couple in Brooksville, Florida have been arrested for growing weed in their home by police.

An elderly couple in Brooksville, Florida have been arrested for growing weed in their home by police. Mr and Mrs Aday had about 30 cannabis plants growing inside their house until police came and charged them with cultivation and possession of marijuana.

Detectives were tipped off by the couple’s electrical company after they noticed unusual behavior in power consumption.

When detectives arrived at the house, they said that they smelled marijuana when they were in close proximity. Along with cultivation equipment, fertilizer, scales, vacuum seal bags and half a pound of weed in the house, detectives also found 30 cannabis plants.

Mr Aday, aged 84, and Mrs Aday, aged 73, were at home at the time the detectives arrived, and were arrested for both the possession of marijuana as well as marijuana cultivation.

The police also believe that this couple are linked to other growing operations in the area.

The energy company tipped off police

The notice to the police about the unusual activity at the house came from the el. It seems that they noticed a major power diversion at the house and tipped off police before contacting the couple.

Indoor marijuana cultivation is an energy consuming process. All the lights, air conditioners and other equipment required to grow inside send the electrical meter through the roof.

Some growers use illegal tapping to bypass the high energy bill, but in the end this was the demise of the elderly couple. The energy company noticed a disparity between the power being drawn from the house and the amount that was shown on the meter. This is what caused the electrical company to notice the disparity, and effectively tip off the police.

A lot of indoor growers are using this method of illegal tapping, and as a result, electrical companies are often tipping off police about suspicious dealings.

If you are in the process of an indoor growing operation, perhaps it’s best just to pay your energy bills. It’s suspicious enough that there is an illegal operation happening inside your house, but infinitely more suspicious when the bills aren’t matching up. So keep yourself safe, and just pay your energy bills. So that you don’t end up like grandma and grandpa, in jail for a long time.