Hawaii shows us what happens when marijuana regulations are too strict

Hawaii’s medical marijuana regulations are so detailed, they serve as wallpaper covering half the conference room of island dispensary Aloha Green. 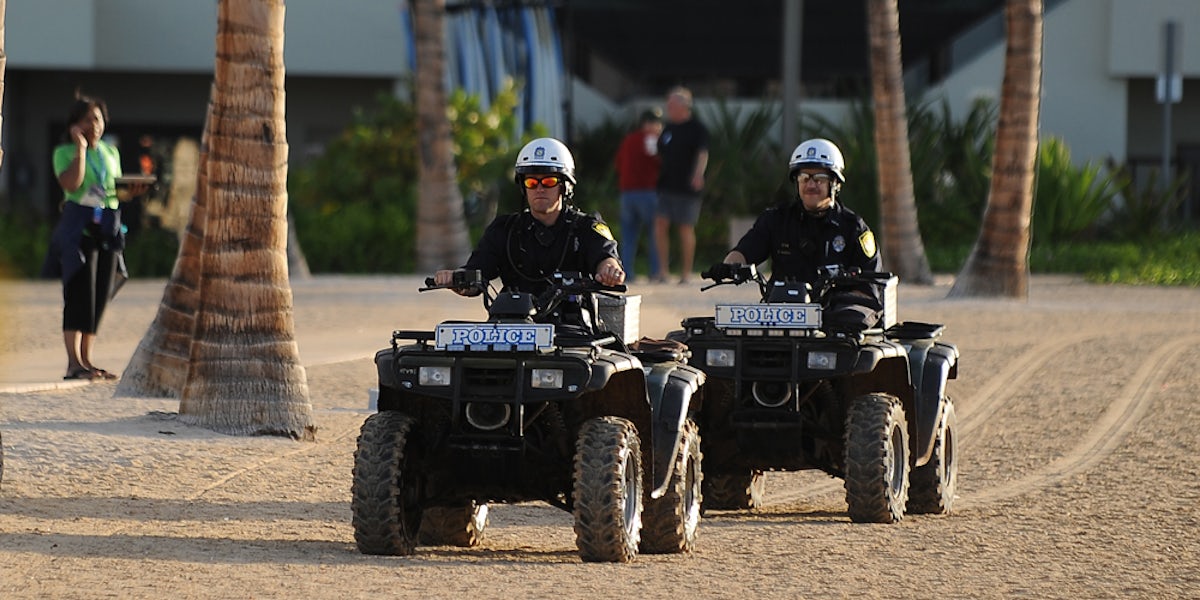 Honolulu police patrol along Waikiki beach as security is beefed up during the Asia-Pacific Economic Cooperation (APEC) leaders’ summit on November 12, 2011 in Honolulu, Hawaii. (Photo by ROBYN BECK/AFP/Getty Images)

Hawaii is laid back, right? Well, that may be so… but not when it comes to medical cannabis.

Even though residents on the island legalized marijuana for medical purposes early on—back in 2000—its program remains one of the most tightly regulated in the country. Hawaii’s medical marijuana regulations are so detailed, they serve as wallpaper covering half the conference room of island dispensary Aloha Green, reports The Atlantic.

For starters, all the weed must be grown indoors and must be tested before it goes to patients. While patients are allowed to view the flowers under a magnifying glass, they aren’t allowed to touch them. And dispensaries are strictly forbidden from selling paraphernalia such as rolling papers. Even cannabis-infused edibles are banned.

So what’s up with all the restrictions in Hawaii? In order to understand it, a person must look at Hawaii’s long history with pot.

“The stereotype is that everything east of the Mississippi is medical, like Delaware and New York, and everything west of it is the Wild West. I guess if you go east to Hawaii rather than west, you can count them as part of the East Coast school,” said Mark Kleiman, professor of public service at New York University, who is an expert on cannabis law.

Back in the late 1970s, Hawaii was a haven for artisanal home growers, New York Times reporter Lawrence Downes explained in 2012. They produced legendary potent strains such as Maui Wowee and Puna Butter.

“Rolling Stone in 1979 called pakalolo [marijuana] Hawaii’s No. 1 crop, above sugar and pineapple,” Downes wrote. “Its sickly sweet haze hung heavily over concerts and beaches, and there was a remarkable tolerance in the air, too.”

Dispensaries Only Got Licenses Last Year

But despite Hawaii’s long and happy history with cannabis, a system of licensed dispensaries was only put into place over the past year or so. Yes, it took Hawaii lawmakers more than 15 years to go from legalizing medical cannabis to actually allowing it in storefronts.

After securing licenses, it typically took most dispensaries awhile to actually get up and running. It was almost a year before Aloha Green actually opened for business, according to director Helen Cho. In the meantime, they were growing their own weed, which is required. Dispensaries can’t buy cannabis from each other, or from any other sources.

There are still only eight dispensaries in the state of Hawaii. Aloha Green is one of three such establishments on Oahu, the “Big Island” that’s home to most of the state’s population. About 5,000 patients are involved in Oahu’s medical marijuana program. Those patients are the only folks allowed inside dispensaries.

This “vertical integration” requirement drives up prices and has limited Hawaii to just a few strains, according to Chris Garth, head of the Hawaii Dispensary Alliance.  If marijuana is considered medicine, Garth argues, this would be like going to a drugstore and finding only Vicks VapoRub and Pepto Bismol for sale.

While it’s understandable that the state wants to control cannabis plants from “seed to sale,” according to Garth, “the vertically-oriented market is incredibly cumbersome when it comes to the costs of production.”

This is one big reason why Hawaii’s medical marijuana is considerably more expensive than the recreational weed available in states like Colorado and Washington.

Hawaii’s health department is in charge of regulating medical marijuana dispensaries. But one gets the distinct impression that lots of folks in the health department have, well, limited experience with cannabis.

“They all have very good intentions, but because they are upright citizens who’ve not done bad things, they don’t really know about cannabis culture and the way that it works. Understandably, they haven’t ventured into it, because they are good citizens who don’t break the law,” said Cho.

Cho said she has to check with the health department so often, she has them on speed dial. For instance, she had to call them to find out if posting a menu of available products violates a ban on advertising.

“Right now we are trying to understand the language that’s in legislation for packaging,” Cho said. Medical cannabis packaging is not allowed to be “attractive to children,” but they’re unsure of what that means.

One of the Strictest MMJ Laws in the U.S.

Hawaii’s particular combination of regulations, with its cautious approach, “makes it one of the strictest laws in the country,” according to law professor Franklin G. Snyder of Texas A&M University. Snyder thinks Hawaii might loosen its rules once a few dispensaries hit their stride.

“Given the general attitudes in Hawaii, once they get their feet wet, I think they will liberalize,” Snyder said.

Kleiman, meanwhile, wonders why the Aloha State doesn’t just cut to the chase.

“Why Hawaii hasn’t gone ahead and legalized marijuana, I don’t know,” Kleiman said.

But the answer to that question probably lies in federal law. After all, Attorney General Jeff Sessions continues to threaten a federal crackdown on marijuana.

“Everyone wants to just be sure that they are doing the right thing, because at the end of the day, we are still dealing with a Schedule I drug,” Cho said.

Enjoy the latest and greatest from Herb, enter your email below to get exciting cannabis updates delivered to your inbox.
December 27, 2017 — Last Updated
Written by Steve Elliott