Now Reading:travel | Photographer captures the tranquil life inside “The Lost City Of Marijuana” 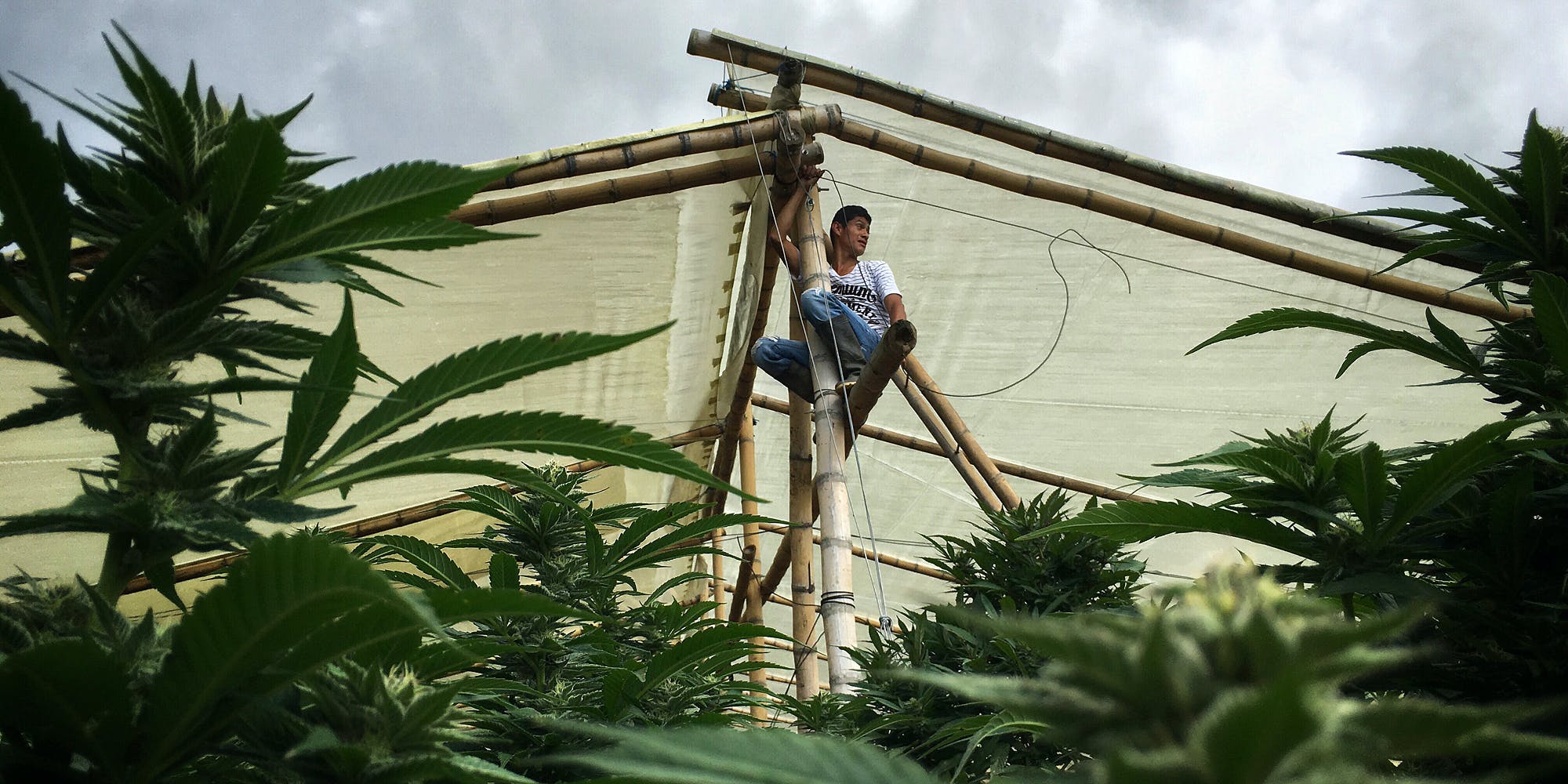 Robeiro climbs to the top of his greenhouse with electric cables that will power light bulbs to keep constant light for the first 3 months of marijuana growth. (Photo by Nicolas Enriquez)

Photographer captures the tranquil life inside “The Lost City Of Marijuana”

Some of the highest quality cannabis in the world can be found growing in the small town of Toribío, Colombia.

With abundant freshwater resources, fertile land, and proximity to the equator where the sun rises and sets on a perfect twelve hour cycle year round, Colombia grows some of the highest quality cannabis in the world. The Cauca department, in the country’s southwest, is one of the largest marijuana cultivation regions in the country.

Here, people of the small town of Toribío carve out a life for themselves using the only profitable crop available: marijuana.

“Marijuana is more profitable [than other crops] because of its price and also the number of harvests farmers can do in one year period,” Photojournalist and documentary photographer Nicolas Enriquez tells Herb. “Marijuana can be harvested after three months of growth under constant light (natural and artificial during the night) giving them four harvests a year which is more than tomato, corn or coffee (other products popular in Colombia).”

The town is roughly two hours outside of Santiago de Cali, the closest major city. Without easy access to a lucrative market—only a crumbling roadway leads in and out of Toribío—the townspeople’s economic options are limited.

For decades, a civil war has been waged between the Colombian government, paramilitary groups, crime organizations, and guerrillas like the Revolutionary Armed Forces of Colombia (FARC). For small farming communities like Toribío, these conflicts have had devastating consequences. In some cases, farmers in the region were extorted by criminal groups and guerrillas into servicing the illicit drug trade.

Guerrilla groups took advantage of the illicit drug market to fund their warfare, taking control of entire regions of Colombia and preventing the government from implementing social services.

Even if they were given a choice, legal crops aren’t profitable enough to sustain the farmers given their limited market access. In the past, the Colombian governments’ attempts to shut down the farms have resulted in conflict, injury and even death.

“Toribio is an indigenous reservation recognized by the Colombian constitution so this makes it harder for the Colombian government to militarize the zone and destroy the crops,” Says Enriquez. “Toribio also has its own militia called The Indigenous Guard and its formed of brave women, men and children” who use simple weapons to fight guerrillas and military forces off their territory.

For the people of Toribío, one kilogram of marijuana (2.2 pounds), can generate roughly 25,000 to 30,000 Colombian Pesos, or $9 – $11 USD. It’s a meager sum, to be sure. But it’s still the most lucrative option available for many in the region. Cultivators in this region can usually yield roughly 60 kg with a field of 1,000 plants.

While the Colombian government has begun providing a limited number of permits for rural farmers to legally grow marijuana to be used for medicinal extracts, these licenses are often out of reach for the people of Toribio.

“People in Toribio who live in extreme poverty don’t have the time or money to pay for transport to go to the big cities where these classes and permits are given,” Says Enriquez, “leaving them once again in the hands of illegal business and without offering aleatory solutions and, even worse having to compete with new business and investment from wealthy Colombian and International companies.”