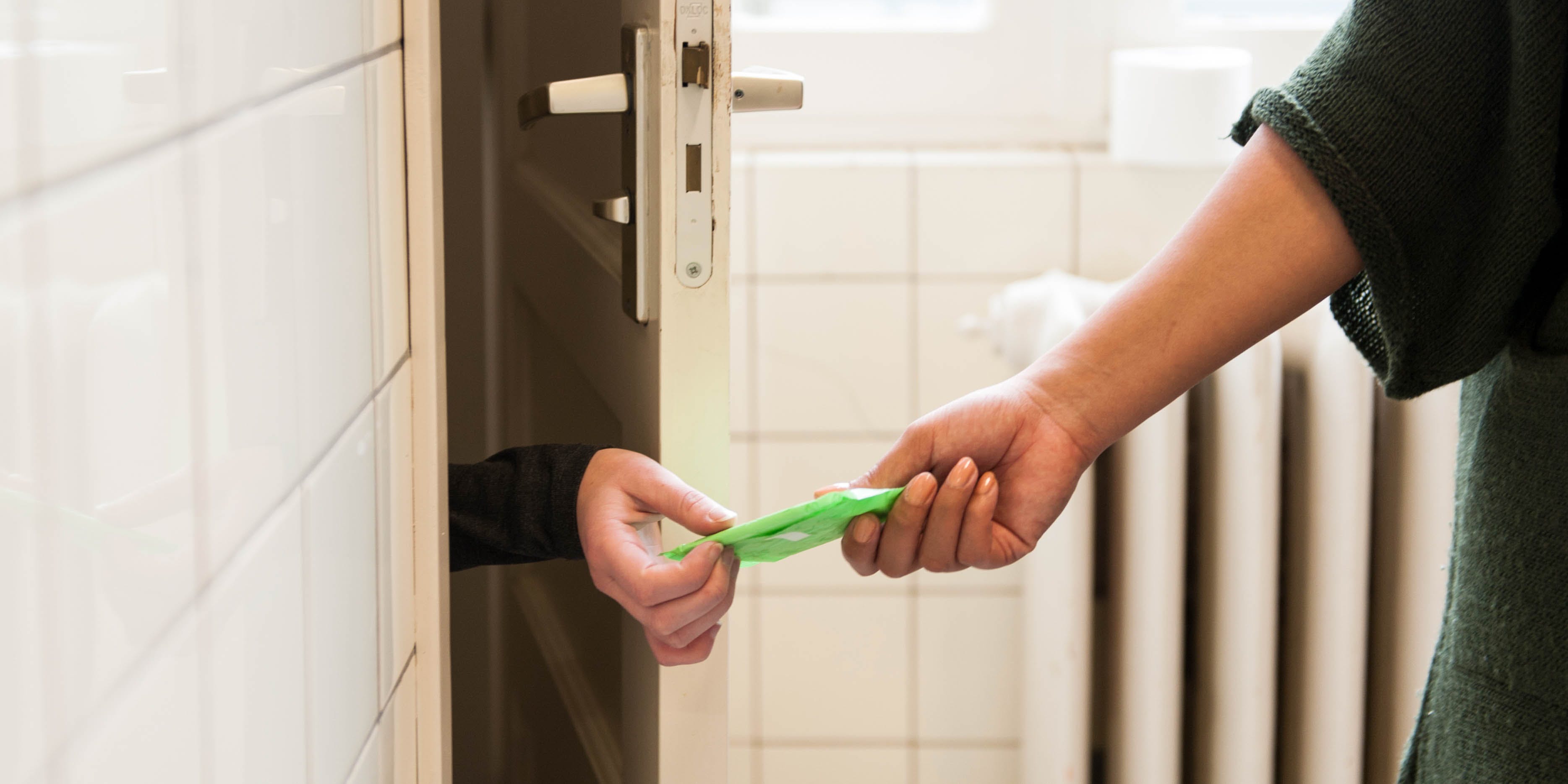 Two women in the restroom. One handing a sanitary napkin to the one on the toilet.(Photo by

Does Smoking Make Your Period Lighter?

Better late than never to get an answer: does smoking make your period lighter?

When it comes to menstruation, the cannabis plant has a lot to offer. From easing cramps to reducing inflammation, women have turned to the herb to relieve women’s health issues for centuries. Apart from relieving symptoms, however, the herb may cause some real reproductive changes. But, does smoking make your period lighter? Unfortunately, science on cannabis for women’s reproductive health is a little too sparse for comfort. Yet, if you’re hoping to lighten your load, you might be surprised to find that cannabis influences your cycle in unexpected and paradoxical ways.

What is a Normal Flow?

There are many things that influence the heaviness of your flow. In fact, the amount of blood loss that occurs per period is between 10 and 35 milliliters. That’s a pretty significant variation and each month is likely different, regardless of cannabis consumption. Things like diet, stress levels, and birth control can all impact the volume and duration of each individual period.

Any factor that influences hormone levels has the potential to alter your flow, cannabis included. A heavy flow is typically caused by a large amount of estrogen compared with progesterone around the time of menstruation. During menstruation, levels of estrogen and progesterone, as well as other reproductive hormones, tend to drop significantly. It is this drop in hormone production that partially stimulates your period.

Sadly to say, based on the limited evidence thus far, cannabis may actually make your flow heavier. Before diving into the science, however, it is important to mention that research on how cannabis products affect the menstrual cycle is mostly poor quality. The science thus far only paints a partial, hazy picture of what may be happening to your hormones after cannabis consumption. So, while early evidence hints that cannabis may increase your flow rather than keep things light, this hypothesis is not fully supported by meaningful research.

For example, a piece of research published in 1985 found that treating uterine cells with THC, the primary psychoactive in cannabis, reduced progesterone levels in the treated tissue. Unless this progesterone drop is accompanied by a complimentary drop in estrogen, you can expect a heavy flow.

Does Smoking Make Your Period Lighter?

There is one key takeaway to keep in mind when seeking answers about cannabis, smoking, and menstruation. Right now, scientists simply do not know exactly how the plant impacts your period. When diving into hormones, things get complicated.

For example, progesterone isn’t the only hormone that cannabis compounds may influence. While there is a possibility that your favorite herb may decrease progesterone and cause heavier bleeding, some of the plant’s effects on other hormones may produce a different impact on the overall blood volume lost during your period.

Things are complicated even further when you shift your focus to estrogen. Research suggests that as estrogen increases, the body’s natural endocannabinoids also increase. Endocannabinoids are like the human versions of THC. Yet, when the concentration of endocannabinoids becomes too high, the production of sex hormones decreases overall, creating a negative feedback loop.

Taking in large quantities of compounds like CBD and THC would theoretically disrupt this loop, potentially suppressing the production of sex hormones in totality. If this is the case, cannabis may decrease the heaviness of your flow overall by stunting the thickness of the uterine lining as it develops. Due to the cyclical relationship between cannabis and sex hormones, however, these changes may not equate to reliable long-term relief from heavy flows. Once the body adapts and becomes tolerant to a new concentration of cannabinoids, the negative feedback loop may continue. An overabundance of cannabinoids may suppress sex hormones, but tolerance to those cannabinoids may cause hormone levels to rise again.

To make things even more convoluted, research has also suggested that consuming the cannabis plant may engage estrogen receptors inside cells. Early research conducted in the late 1970s was the first to suggest a relationship between THC and increased estrogen activity. Yet, this theory has been replaced by the understanding that perhaps another compound in the cannabis plant is the more likely culprit.

A compound called apigenin, a flavonoid in the cannabis plant, has been found to act similarly to estrogen in the human body. There is something important to note about estrogenic compounds, however. Foreign compounds may be able to engage some of the same receptors as estrogen, but none of them are exactly the same. In fact, many foreign substrates can actually replace real estrogen with a compound that doesn’t fully satisfy all of the demands that estrogen so sufficiently meets. So, while this flavonoid may hijack the cellular landing sites normally reserved for estrogen compounds, it is difficult to tell what implications this would have.

So, does smoking cannabis make your period lighter? The bottom line here is that it is possible, but there is no way to know for sure. Given all of the other hormones that cannabis may affect, it is impossible to tell whether the herb will lighten your flow or make it heavier. How cannabis compounds influence sex hormones is still understudied and misunderstood.

Further, endocannabinoids and sex hormones have a cyclical relationship with one another. Sex hormones can influence the amount of cannabinoids in your system. Too many cannabinoids, however, can decrease the number of sex hormones in your system overall. Whether or not cannabis will have an impact on the overall amount you menstruate each month will likely depend on a large number of factors, including how often you consume the herb and what your hormones happen to be doing at that given time.