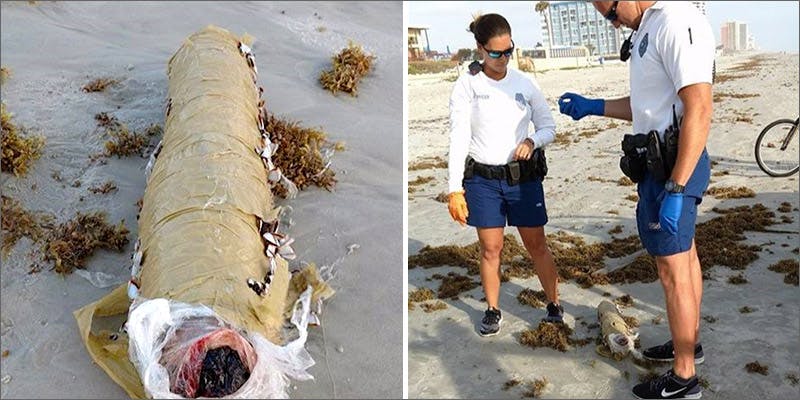 It’s not every day you stumbled on something that you normally wouldn’t find at the beach; a 10-pound “giant blunt” that was stuffed full of weed.

Some Floridians stumbled on something that you normally wouldn’t find at the beach, or any other place for that matter, which was a 10-pound “giant blunt” that was stuffed full of weed.

This past Saturday, Volusia County beach-goers found a 10-pound “blunt” that was stuffed full of weed, which looks to have been in the water for close to two weeks.

The Customs and Border Protection agents that recovered it were still trying to figure out just where the taped-up package of marijuana (done so to resemble the shape of a giant blunt) had come from.

But it wasn’t just weed that was found, as agents said there was also some blood on the package, a trick that is often used confuse trick drug-sniffing dogs (so, no, it doesn’t mean the would-be smuggler met an unfortunate end).

On either coast, the month of March has seen some interesting bundles of weed washing up on the beach, beginning with the discovery of bundles of something “suspicious” found on a Californian beach.

Just south of Del Mar, Carla Hayes and her dogs discovered bundles that, upon closer inspection, were found to be tightly packaged bricks of cannabis. Instead of scurrying the bundles away, the lifeguards that were soon on the scene contacted the Sheriff’s Department, who then confiscated the bundles.