Every person has their own unique story of how cannabis heals. Amy Mellen shares her road to recovery with us, and says she owes it all to cannabis. 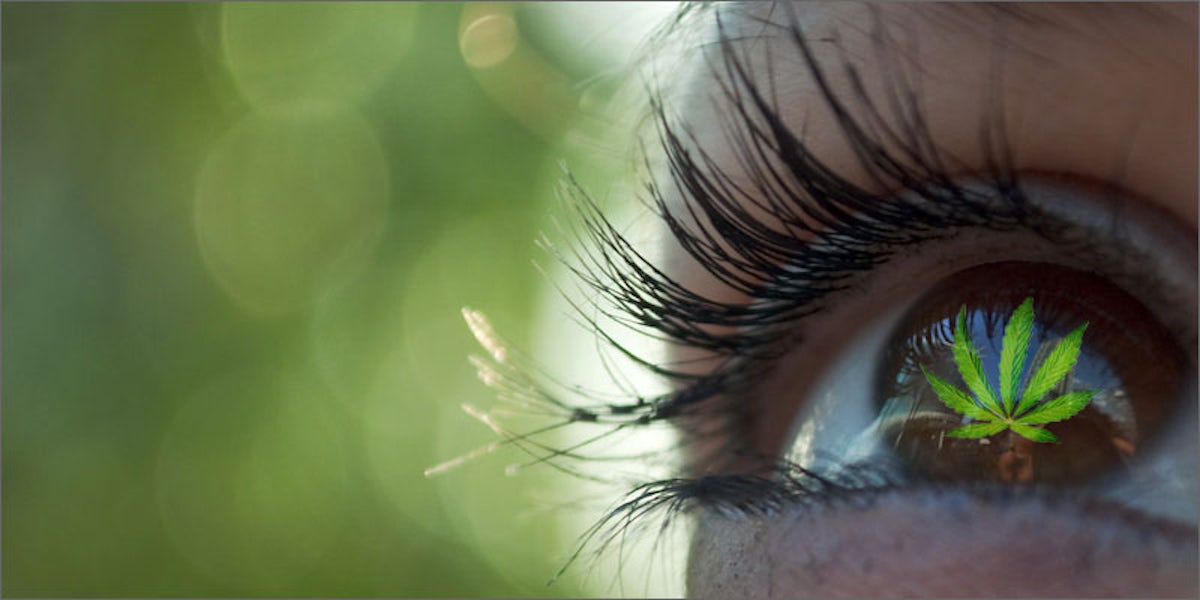 Every person has their own unique story of how cannabis heals. For some, the journey is a brief one, but for others, the road is long and dark. Meet Amy Mellen, who shares her story of pain, hardship, dependence, healing, and hope. 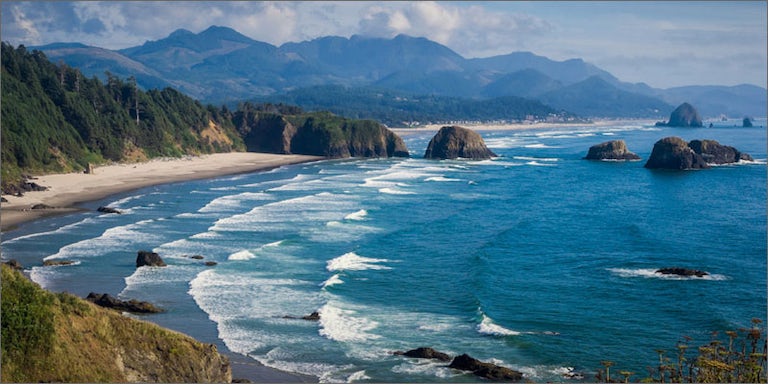 Amy Mellen has been through more in her 47 years on earth than most. Born in Nebraska and raised in Oregon, she grew up in a family that espoused sports, activities, and the typical wholesome American image.

I did not smoke weed, drink alcohol, party, skip school, nada. None of it. There were certain expectations of me. I WAS going to college, I WOULD have a career. I think a lot of it was just the way it was in the 70’s and 80’s, it was a different world back then. I happened to looked down at anyone that smoked weed, they were considered lazy and worthless.

Marijuana was the Devil’s drug and was used to get high and ruin your life. Well isn’t that what Nancy Reagan was saying with the DARE program? We were brainwashed into thinking that nothing good could come of this plant and that’s what I believed until about 18 months ago.

Amy married in 1990 and graduated from college with her Bachelors in 1991. Her first child was born in 1997, and her second a year later. Hormonal migraines from her second daughter had her doctor give her Percocet for the first time in her life.

I always wanted to be a wife and a mom. I had what I thought was the American Dream.

Then a horrendous rollover crash on the way home from a vacation changed her life.

I spent the next four years going through surgeries, physical therapy, and hundreds of dressing changes. I still have some glass and road debris left in my body.

Medications and side effects 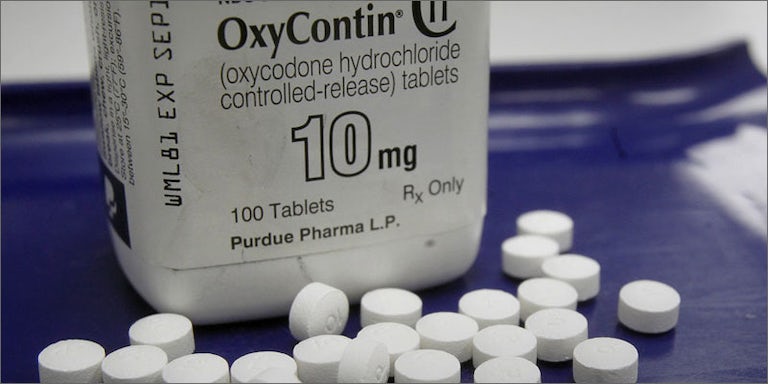 From the earliest moments, I was placed on anti-depressants, anti-anxiety, blood thinners, muscle relaxers, opiates, ibuprofen, and more. Because of the trauma my body was going through, my blood sugars shot up and they sent me home on insulin November 2007; now I was a Type 2 diabetic.

Through the years, I took almost every opiate out there for pain. My body didn’t respond to morphine so they placed my on Oxycontin which is long-acting and time released; the strength varied depending on pain. I used Percocet for breakthru pain in between the Oxycontin.

From pain management to physical dependence 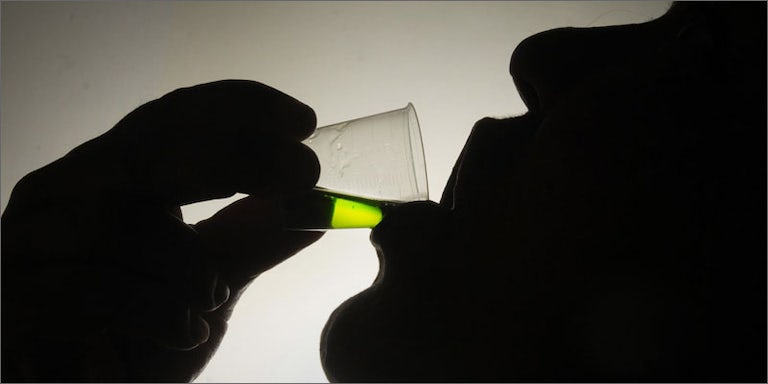 For 18 months, Oxycontin was a way of life, until she saw new stories of its dangers. To wean her off it, doctors placed her on methadone instead. Going from bad to worse, she was now a synthetic heroin addict, without even knowing. The side effects were so profound that she tried to quit.

After trying to detox off the methadone, her fits of emotional overload became so intense that they caused a crisis with her children, and she went back to Oxycontin. 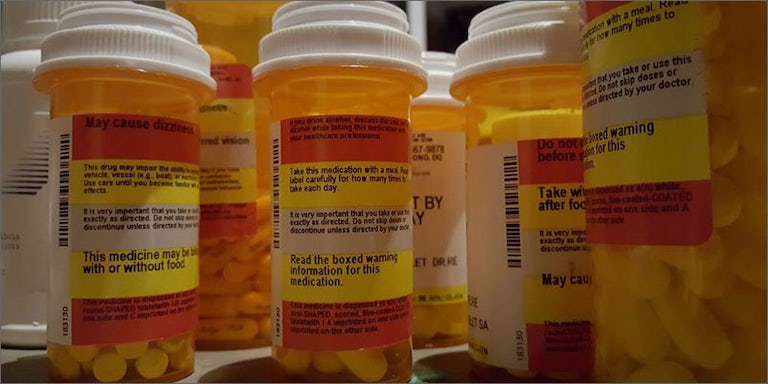 Amy hated how the drugs changed who she was, even to her family, and began to attempt to detox every spring, as the nerve pain was the worst in the fall and winter. But opiates weren’t her only demon.

In 2009, I found myself in a detox of a different kind, one of anti-depressants and anti-anxiety meds. A doctor that I spend 90 minutes with changed my Cymbalta to Prozac and Klonipin to Lorazepam. They work totally different in the body and I went into a serotonin overload.

The dramatic change threw her system into chaos, and for the first time in her life, she became suicidal to the point that she had to be admitted to an inpatient mental health hospital. It took months, but therapy helped her gat back on her feet.

It wouldn’t be easy. Her relationship with her husband had been so strained by her bouts with physical dependence and his medical issues that recuperating together in a small house became unbearable. They grew apart, and in 2010, they divorced.

A new life, and a final straw 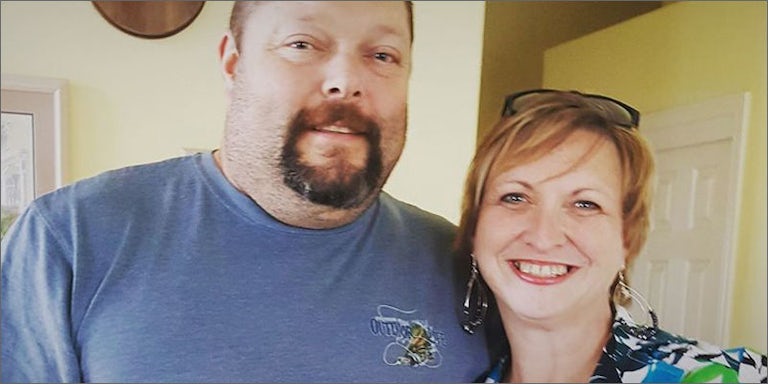 Amy met her new husband, Todd, the next summer. His positivity helped her through more surgeries and infections, as well as some significant weight loss. In 2012, they married, and even with her medical complications, Amy’s life seemed to be looking up.

In October of 2014, her medications jarred her life again, in an unexpected way. She blacked out at the wheel while driving, with kids in the car. She was cited for the accident but found out later that her medication, Neurontin (Gabapentin), was the culprit. Other people had experienced the same side effect.

I lost my license and had to take public trans to all my physical therapy appointments. It was a 5 hour trip that was stressful and got my PTSD going. I was not in control when riding a bus, could not hold on with my left hand and my balance wasn’t so good. One day running for the bus I tripped, injured my good arm and ended up with a hematoma on my arm! That was it, no more pills! 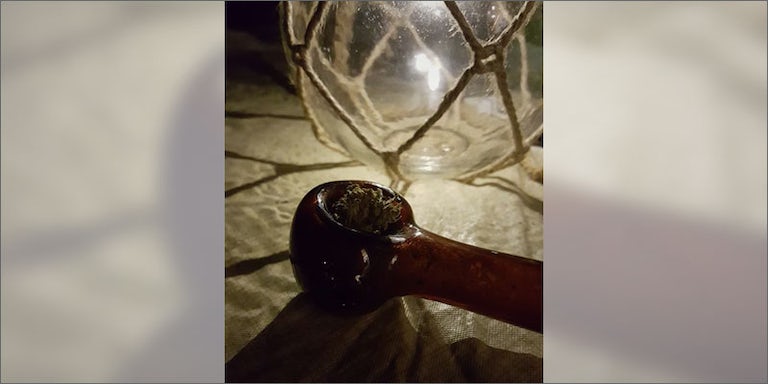 Todd knew a gal whose husband had got his medical marijuana card and decreased the amount of opiates he was taking for chronic pain. So one day my husband texts me on his way home from work, says bring a lighter and meet him at the driveway. We drove out somewhere on backroads and he hands me a bag containing a new glass pink pipe and a little bag of weed.

That’s where it started. I began smoking Raspberry Kush in the beginning. The pipe was harsh so he surprised me with a bong that can take ice; much better for me back then. I began keeping my pain journal with the cannabis, just like I did with my pain meds for years. What did I take, how many milligrams, what kind of pain, etc.

So with the cannabis I recorded what strain, how much did I smoke, how long for the effects, what effects, how long did they last, etc. I wanted to figure out if this could really work.

The full spectrum of healing 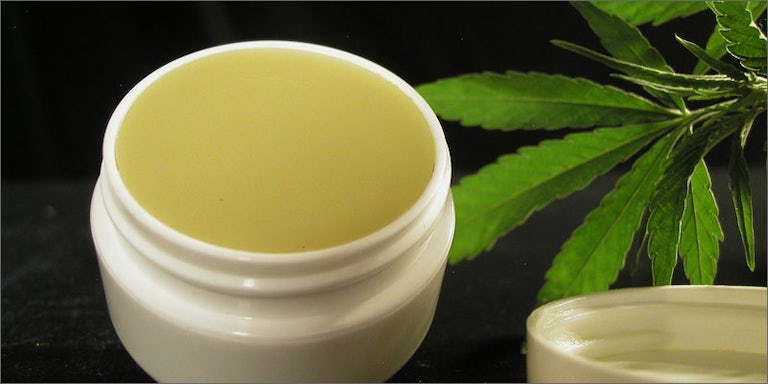 Another friend of Amy’s new husband had opened a medical dispensary in Portland, and he introduced her to topicals. Nothing she had tried before worked like this.

I could literally feel my arm warming up, getting the blood circulating and touching my nerve pain. This was crazy, relief within minutes!

From PTSD and a facial tic developed after the accident, the sheer volume of her conditions demanded more. As she weaned off her meds, other conditions came to light, including Tourette’s. In May of 2015, after learning about Rick Simpson Oil, she bought her first dose. 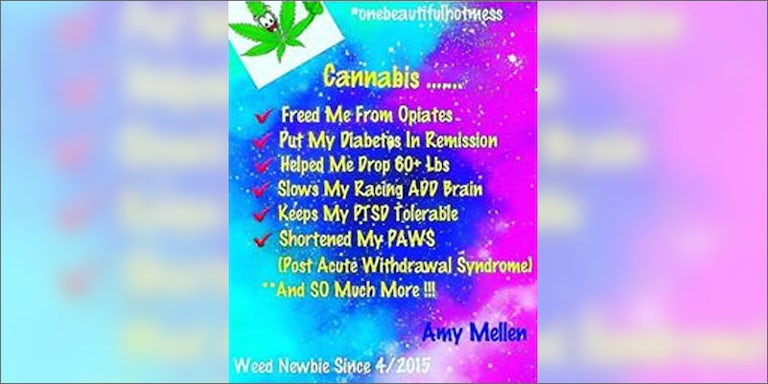 Things quickly began to turn around for Amy. The cannabis oil dropped her blood sugars, and in 2 months she was free from diabetes medication. Even her doctor was astounded.

The best way I can describe it…the cannabis just went in and found homeostasis in my body. One by one I was able to start cutting out other meds and supplements I was using to deal with the original side effects. Water pill, stool softener, laxative, liver and kidney detox supplements and so much more. They were gone! The more healing it did the better I felt.

The pain of withdrawals 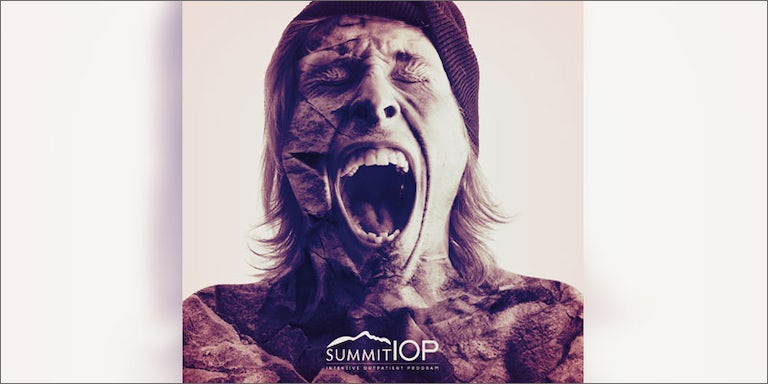 Oh my, if you’ve never dealt with opiate withdrawals or Post-Acute Withdrawal Syndrome, you just can’t understand why other’s don’t get clean. It’s the darkest scariest place I have ever been in my life! This was my 27th detox, so I already knew what I was in for. But, I was not prepared for what my nerves were going to experience from going off the Neurontin.

To sum it up, the process was worse than hell. Her doctor had mentioned the potential addiction aspects of opioids but had never told her about PAWS, or what it would do to her. 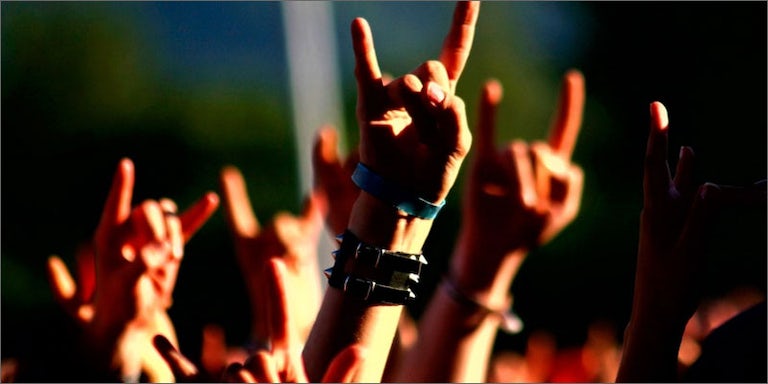 In this horrible time, it was cannabis, family, friends, and surprisingly a newfound interest in heavy metal music that helped her pull through the darkness. The aggressive, ‘been through hell but never give up’ sentiment struck a chord with her own life. She would sit in a rocking chair on the porch, bare feet in the grass and headphones cranked, and find serenity and strength.

I was able to return to the work force in July 2015. I would have to say this was MONUMENTAL to my healing! I realized I COULD be a productive member of society again, it was very self-empowering. Just two weeks into my job and I was able to take my last Percocet on July 31, 2015 at 9pm.

I am now opiate free. In fact my family has a hard time getting me to take a Tylenol or Ibuprofen now. 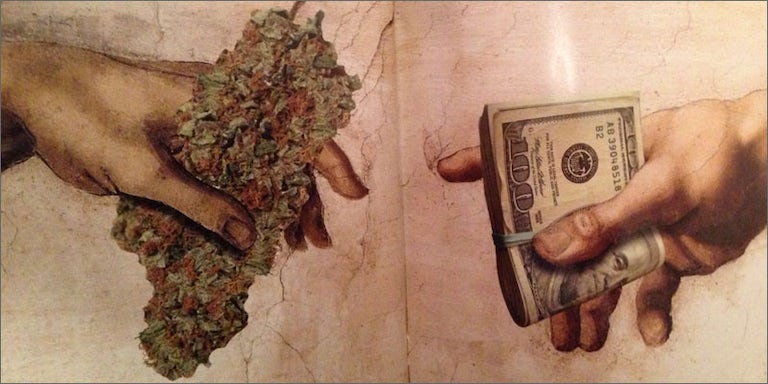 Unlike prescription medications, cannabis is rarely covered by insurance, leaving the entire bill up to patients.

This whole process has taken a huge toll on our finances. Since I knew nobody who grew plants, made oil, medibles, etc. we did this all through dispensaries. We have invested over $15,000 in less than a year. Plus we maxed credit cards, skipped bills, got behind, all just to heal me. 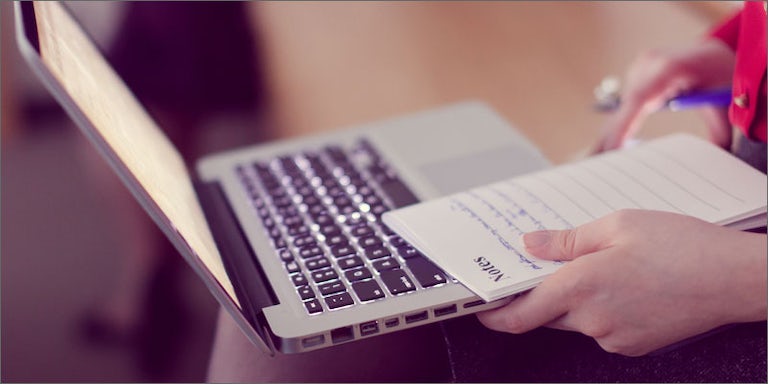 It wasn’t until Amy started going to seminars on cannabis oil that she realized she had been doing it all wrong. Her body wasn’t absorbing the medicine efficiently, causing her to use far more than necessary. Amy had always kept a journal of her medications, and could instantly see her mistakes.

She learned about the blood/brain barrier, the role of the liver, and how carrier oils help cannabis oil absorb more efficiently.

We started making capsules out of flaxseed oil and the RSO in August 2015. After learning of the blood barrier, I started making sure I had food in my stomach whenever ingesting my oil capsules; wow, what a difference. It was, and IS little things like this, that I have learned on my own along the way.

I listen to my body, I record, I reflect, I revaluate when necessary. People have to remember this is a plant, they are each unique. 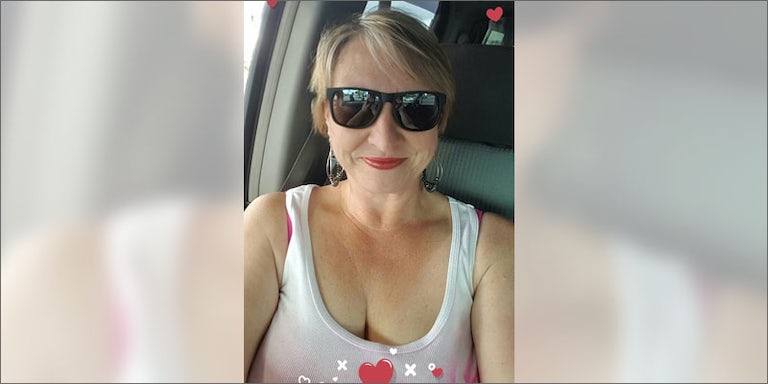 Now Amy pays around $1,500 a month in medical expenses, not including the oil. One issue she has is that her conditions respond better to indica strains, but most dispensaries carry sativa or sativa-dominant hybrids. Medibles have the medicine that works best, but the excess sugar is a concern for many patients.

Amy has recently moved to Washington state because of the rent wars in Portland and says the restrictions there are problematic, at the least. She wants people to know that voting for access is not the same as making medical cannabis accessible.

Amy Mellen: From apathist to activist 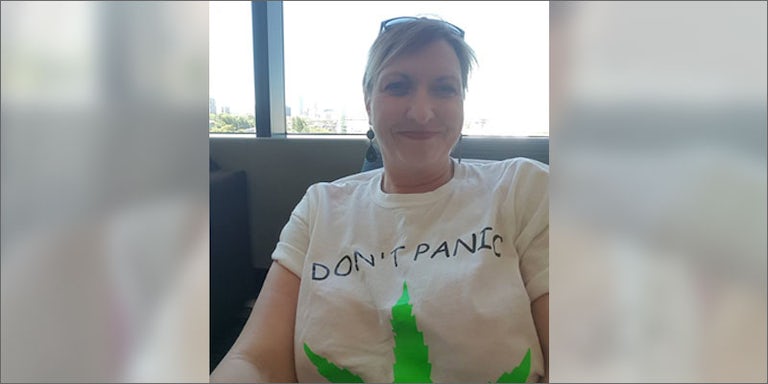 Amy’s mind and body are going to take years to recover from the damage of her accidents, and the medications she was put on by doctors that didn’t realize the potential of cannabis as a safer alternative. Cannabis is helping her heal faster, but the process continues. She takes cannabis oil with flaxseed in caplets twice a day and uses edibles for sudden increases in pain like she once did with Percocet.

Amy purchased her own Magical Butter machine and hopes to make most of her medicine at home or with a friend for a fraction of the cost. She has gone from thinking of cannabis as “The Devil’s Lettuce” to advocating for it in front of the Oregon Health Association, attending hearings at the State capitol, and reaching out to others to lend support.

Amy hopes to bring awareness to the healing powers of cannabis for substance addiction and chronic pain. She also strives to spread the word on the dangers of opiates and struggles of people dealing with PAWS.

Do you have your own story of healing with cannabis? Has it helped you replace dangerous medications? Let us know on social media or in the comments below.