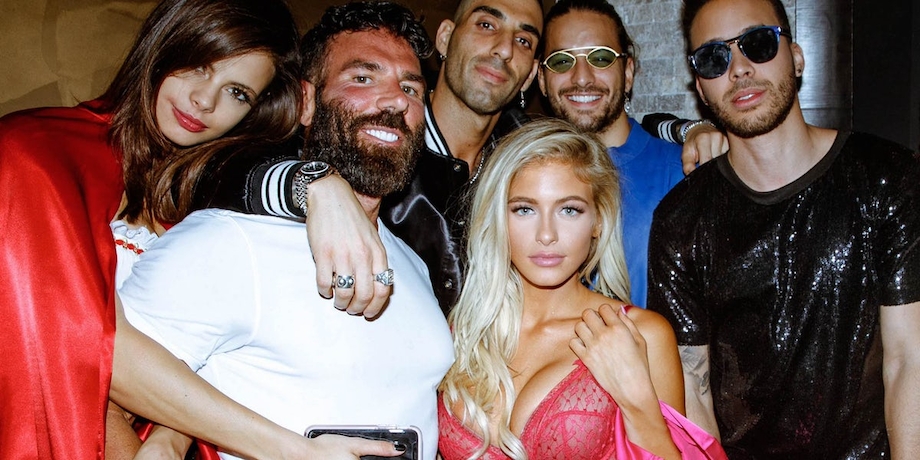 I traveled to Dan Bilzerian’s mega-mansion to find out what his existence—whether you love him or hate him—reveals about our convoluted quest for sexual liberation.

Dan Bilzerian. You either don’t know about him or you have a strong opinion, but there is no middle ground. I considered this on my way to his $100-million dollar mansion in Bel Air, along with CannaLife 500, for his Green Axis Halloween party and the promotion of his new cannabis company, Ignite.

As the car wound higher up the hills where California’s finest hedonists reside, I swiveled my head to take in the property’s magnitude one section at a time. Sitting above the city and behind the monstrous metal gates, each floor sprouted from the earth like giant stone platters of opulence, while below, cars and people rushed about as if any second the wrong wire would be cut. At the front door, a smiling demon peered down from the awning and a beautiful woman handed me a tangerine CBD vape pen. Like a gaping mouth, the entranceway to the house swallowed me whole.

I asked strangers and friends ahead of time about Bilzerian, and every person said something different:

But above all, Bilzerian is a man buoyed by rumours—no one seems to know definitively about his wealth or personal history—which begs the question: what is closer to the truth, who he is or who we believe he is?

I’ll start by putting forward a consideration: Dan Bilzerian is single-handedly running the most immersive marketing campaign since The Truman Show. The difference is that he knows it—and it sells. It is the construction of his legacy, click by click. 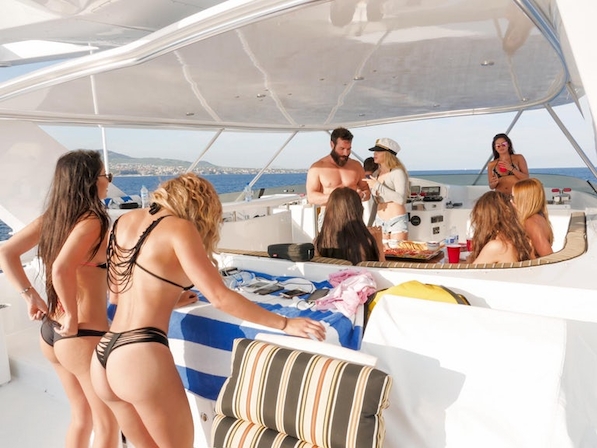 From Ignite’s hyper-sexual billboards—like the one that sparked public backlash in Modesto, California of two women in bikinis, each with an arm wrapped around the other’s waist and “Best Buds” written across their backs—to the company’s $1-million dollar worldwide spokesmodel search and his controversial social media posts—like this one of him balancing the Cannabis Cup on a woman’s ass—it’s the Bilzerian package in every way, all the time.

Standing in the kitchen, Bilzerian is eating dinner while being fawned by clusters of partygoers with their phones out. We are negotiating a time and place to record an interview for Herb. His speech is kind and soft, he seems surprisingly introverted and has a generous laugh. His presence is far from what I assumed it would be. He suggests we do a dab, I’m hesitant and admit that it would be my first one, ever. He leans back, shocked: “well then we definitely have to do it!” The circle of people wanting his attention closes in but he is keeping eye contact, only looking down for a moment to stab a vegetable with his fork. His girlfriend, Katie Bell, comes over to grab him. “Find me later,” he says over his shoulder before being whisked through the crowd. His bodyguard, always nearby, flashes me one of those genuine smiles—the kind you don’t come across often in LA, I’m told—before disappearing too.

I do find him later, but first, there is much more to see.

Comparing Bilzerian to Fitzgerald’s Jay Gatsby of The Great Gatsby wouldn’t be entirely misleading given that the party is unbelievably luxurious, almost laughably so. Guests marvel over the mermaids in the swimming pool, his sprawling living rooms, and the acrobatic performances under the stars. Swag bags with pre-roll joints, flower, and other cannabis-themed gifts circulate. Ignite products are lined and illuminated in glass cases for viewing. The crowd grows rowdier as they get drunk on free booze, while world-famous DJs provide the night’s soundtrack and celebrity sightings are in casual abundance.

The absurdity is only amplified by the Halloween dress-code. “We turned our wands into blunts,” two wizards tell me as I walk by. Sitting on a barstool, world-renowned motivational speaker, Nick Santonastasso and I watch as people around us pass an Ignite THC vape pen. “You really should have worn a unicorn costume,” I say, exhaling smoke.

In this atmosphere of revelry, curiosity about Bilzerian dominates most conversations I overhear: 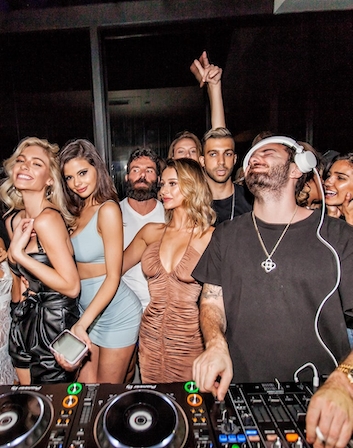 “I think he is at the bar doing shots with Steve Aoki.”

“He’s a trash person. This party is nuts though,” the Cookie Monster yells in my ear.

If the mansion was the body of the beast, I needed to find the heart. And I did, on the second floor in a small room behind heavily guarded sliding doors that I was escorted through by one of his business associates. Bilzerian, his “entourage of girls,” and his close friends are all just chilling the fuck out on a couple of couches. No peacocking. It felt like finding an air pocket.

Caleb, a self-aware and self-made millionaire who came from next to nothing, offers me a water bottle. We stand on the deck talking about his volunteer work and what he wishes he had that money can’t buy: ‘shame,’ he says with a laugh. I ask another man about his plans the following week, and he lists jet-setting to exotic lands in the same way I might list chores. Machine Gun Kelly is leaning against the wall. Tyga is sitting on the couch. Drew Taggart is taking a photo.

Bilzerian shares a glass of champagne with a few of the women draped around him in lingerie, smooth limbs everywhere. The door slides open and another meal is placed on his lap. A girl dressed as an angel with no pants plunks down on his armchair. He asks her to move so he can eat but she doesn’t. He pokes her: once, twice, three times. Nothing. Finally, he gently nudges her away. I’m watching this from a nearby couch while a man who owns a few airports and is dressed as a skeleton with an erection asks me if I want a shot of Patron. Smoke lingers in the air, and through it, I see what moments are deliberately posted online for his 25 million followers to see. There’s a reason The Great Gatsby contains the best party scenes in American literature. It is fantasy: sex, drugs, money, music, fame; and fantasy is often disguised as freedom.

At this moment, for many, it is.

I asked about 30 people throughout the night why they were at the party and the consensus was: perverse fascination. This very sentiment embodies a casual hypocrisy of applying an arm’s length scrutiny to that which you are a part of. Like blaming traffic while sitting in your car.

As observers of the rich and famous, we revel in the chance to experience their normal. And then we simultaneously revel in the satisfaction of seeing them fall after holding them to a higher standard based largely on their audience-size. At no point are we made to feel uncomfortable about either pleasure. In this case, the polarities are: by living an unapologetically exploratory life, Bilzerian is redefining sexual liberation (what’s the harm if we’re all consenting adults? )—or he is merely an extension of misogyny and toxic masculinity. Like all things Bilzerian-related, it depends on who you’re asking—and that reaction, one way or the other, is where we begin to heal the divide.

It’s probable that most guests at the party will never be written about in the history books, and yet they were there, shaping it as a collective. Perverse fascination. Before arriving at the party, when I asked about who the host really is, there was one answer blatantly missing. Dan Bilzerian: the man, the myth, the mirror. Whether you love him or hate him, it’s time to ask why. He is, after all, anyone we believe him to be and he’s selling what we’re willing to buy.