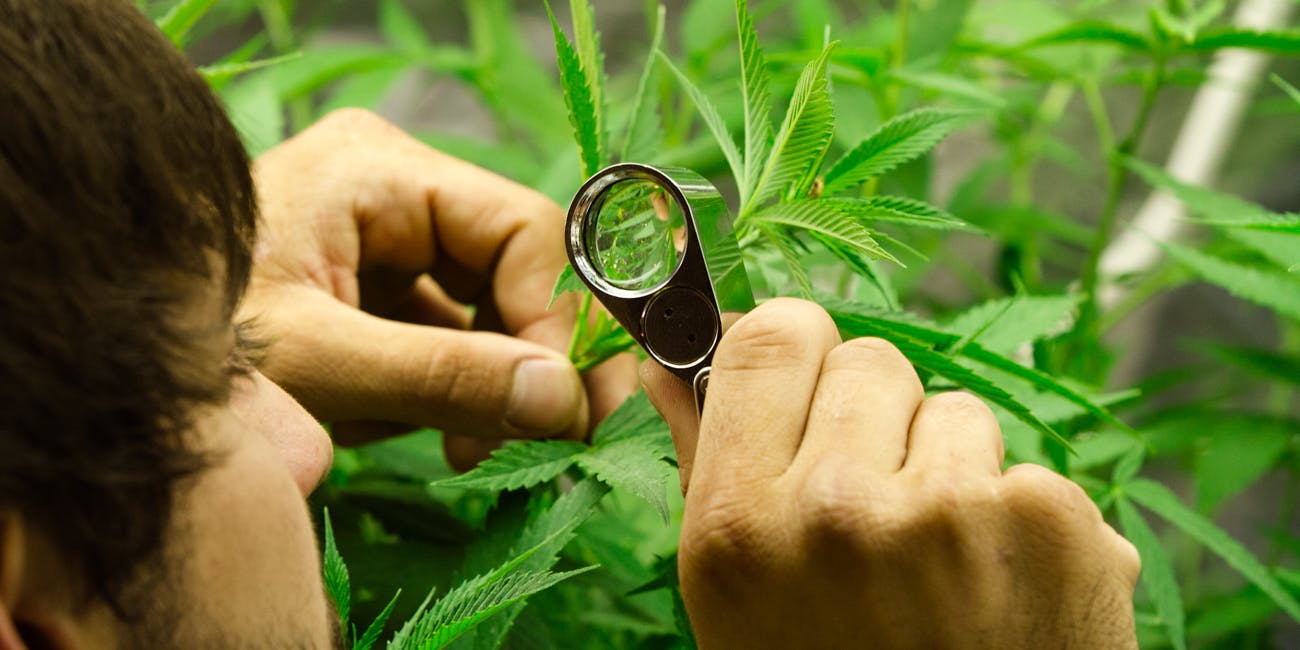 “It’s so damn hard to find. By the time you know about it, the plant’s gone,” one farmer said.

Outdoor cannabis cultivators face many fears, not the least of which are uncooperative weather, theft of their crop, and legal prosecution. But you don’t have to hang with pot farmers on the American West Coast long to learn the greatest modern threat to their precious plants: russet mites.

While the russet mite, also called the hemp russet mite, has gotten the thistle population under control (a decidedly good thing for all farmers), it has wreaked havoc on the cannabis plants of thousands of American farmers.

Cultivators all along the West Coast, including many in Southern Oregon and Northern California’s legendary Emerald Triangle, are suffering significant losses from the microscopic pest.

Why They’re Way Worse Than Other Mites

The russet mite is often significantly more damaging to outdoor cannabis crops than the typical infestation threat, the spider mite.

The challenge is the fact that they are nearly impossible to spot. They reside on the underside of leaves, where they are mostly hidden from view. Often, the presence of russet mites goes undetected until the damage is too great to save the plant. This is especially true in cases where farmers do not conduct regular crop inspections.

Spider mites, on the contrary, leave small white spots on what quickly become withered leaves. As a colony grows on a plant, the spider variety quickly forms a fine webbing that is easily detected during daily or weekly crop checks.

Why Russet Mites Are So Hard To Catch

The elusive russet mite insect is less than half a millimeter in size. It is so small, in fact, that some farmers in Humboldt and Mendocino are employing testing labs because the pests are best detected with a microscope. “I’ve never seen ’em, myself. But I’ve seen the results. They eat the plant from the inside out,” explained Ricky L., a Humboldt County family farmer, who requested anonymity because he operates on the black market.

“Those damn russet mites start at the central trunk and go out, toward the big colas,” said the farmer. Many readers might imagine a small, spindly plant under attack. However, russet mites often attack outdoor cannabis plants that are eight, ten, or even 12 feet tall. Loss of a single plant can result in four to 10 pounds of cannabis flowers that will never reach customers or patients.

What To Look Out For

One cannabis farmer in Southern Humboldt County, who suffered an infestation, described the effect of russet mites on her garden. “Basically, [evidence of them appears as] the crinkling of leaves. Every little finger on the leaf folds in on itself,” she said.

“The buds, where the [pistils appear], are all brown and dead looking,” a small-scale farmer in Southern Humboldt told KMUD News, adding, “[The russet mite] eats resin and hairs. Anything that’s resinous, basically.”

Why The Government Is To Blame

Ricky L. said he’s frustrated with regional authorities who introduced the russet mite to combat the thistle population without thinking about the consequences for cannabis farms.

“We’ve had a huge russet mite problem in the last two years,” said the second-generation farmer. “Before that, it was nothing…I didn’t know what the hell a russet mite was,” he told Herb.

Ricky says he’s lost dozens of outdoor cannabis plants due to the russet mite. “It’s so damn hard to find. By the time you know about it, the plant’s gone,” he said.

The solution for russet mites?

To combat losing even more valuable outdoor cannabis to the russet mite threat, farmers have been fighting back with a variety of solutions, including soapy solutions and both synthetic and organic pesticides.

For long-term control, savvy cultivators—especially those who embrace organic farming—are introducing predator insects to their farms. These include preying mantises, ladybugs (which also eat aphids, another common pest to pot plants), and even predatory mites.

Another holistic strategy to combat mites of all types is a “distraction crop.” In this case, a farmer positions special plants at the perimeter of a garden or farm. Qualifying plant species are chosen based on their appeal to hungry mites more than a cannabis plant.

As outdoor cannabis cultivation expands during the green rush on the West Coast, farmers—especially those growing large outdoor plants—must be ever-vigilant in their crop inspections.

In the words of Ricky L: “The sooner you find the mites, the more medicine you save. Period.”