Now Reading:culture | This Crew is Turning Trashed Skateboards Into Weed Grinders to Save the Planet 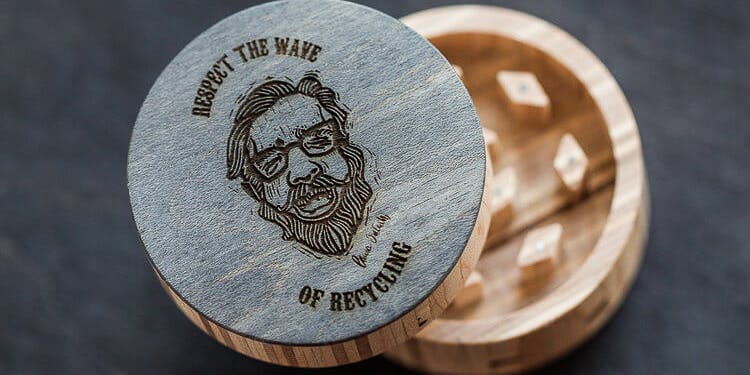 The crew over at BoardThing are proving that one person’s trash is another person’s treasure.

The life of a skateboard is shorter than you may think. In fact, when used professionally, a board might last as long as a few weeks. And once it breaks, it’s nine times out of ten going to wind up in the garbage, along with all the memories that are attached to it.

“Every day, thousands of skaters in Europe produce large quantities of wood waste.”

Inspired by the potential of processing raw materials, commonly seen as waste, a group of friends bonded by art, recycling and skateboard culture decided to quite literally turn one man’s trash into another man’s treasure. And they’ve since then managed to build an entire business out of turning trashed skateboards into weed grinders.

After discovering that Canadian Maple, which skateboards are made of, is a material that has a lot of aesthetic and utilitarian value, the friends were instantly inspired. So in 2013, they created BoardThing– handmade products from discarded skateboards.

Ever since then, the crew over at BoardThing have been collecting decks all over Europe. And by turning trashed skateboards into weed grinders, they’re popularising ecological lifestyle in the best way possible. All the while, they’re consistently promoting the 3 R’s philosophy: reduce, recycle and reuse.

So how does the process of turning a skateboard into a weed grinder work? I spoke with Sebastian of BoardThing to find out just that. The first step is to, of course, collect the boards. After that, “we are cutting the boards, gluing them and cutting the grinders with the CNC machine. Then grinders need to be sanded, finished by hands and oiled on the outside,” says Sebastian.

“The biggest advantage of our grinders is the natural material as a recycled wood they are made of. When you crush the herbs, you can smell the mix of Canadian maple and cannabis”

That’s what people love most about BoardThing’s weed grinders. Although wooden grinders don’t have the most excellent rep, BoardThing’s accessories are unique. By buying their grinders, Sebastian says “you promote eco-friendly culture, contribute to reduce the amount of waste, and take part in planting trees – one grinder plants one tree.”

“You not only do something for yourself but also you take part in a huge cause,” says Sebastian. But do the grinders work as well as others made of materials like plastic or metal? According to Sebastian, yes. And considering not a single one has less than a five-star rating on BoardThing’s Etsy page, it must be true. Not to mention, they’re also lauded by the skateboarding community.

Each day, the company makes anywhere from 1 to 10 grinders, depending on the demand. In addition to Etsy, you can also find them for sale right on BoardThing’s website: www.boardthing.eu.

On top of the weed grinders, BoardThing makes rings, necklaces, and Apple accessories as well. Also, they create lamps, bottle openers, and magnets out of trashed skateboards. And soon, they’ll have more weed-friendly products to offer, too.

“In the future, we are going to produce rolling trays made of recycled skateboards, so stay tuned with it,” says Sebastian.

BoardThing is always collecting used and broken skateboard decks. So if you happen to have any out-of-commission boards lying around, you can join the movement and help the crew “promote an ecological lifestyle, recycling and sustainable design” by recycling your skate wood. Just reach out to BoardThing via email, or catch them at local skateboard competitions.