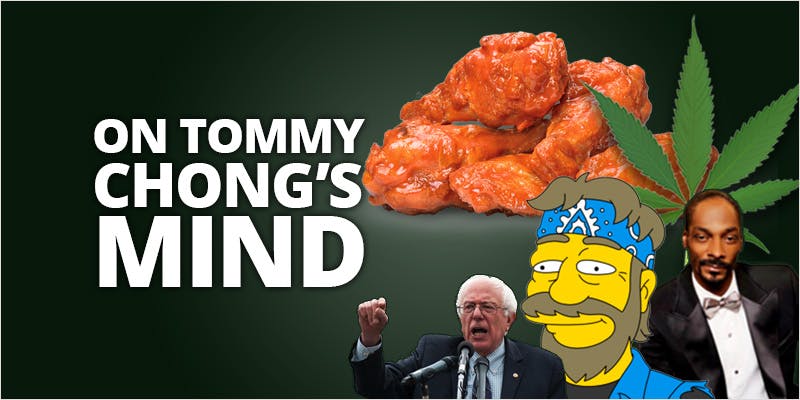 Tommy Chong and Sean Evans discuss Weed, Bernie Sanders, and smoking with Snoop Dogg in this interview while eating wings and enjoying some of the hottest sauces in the world.

Tommy Chong and Sean Evans discuss Weed, Bernie Sanders, and smoking with Snoop Dogg in this interview while eating wings and enjoying some of the hottest sauces in the world. Be sure to check out the video below for a hilarious and spicy conversation!

This entertaining interview takes place right in the home of Tommy Chong, one of the world’s biggest cannabis enthusiasts. While going through a series of questions, the two sample out some extremely hot sauces with their wings. Chong is not quite sure if it’s the wings he’s enjoyed the most, or the weed he smoked before.

From February 6 Tommy Chong’s personal line of cannabis will be available, as seen at the Cannabis Cup. From oils to flowers, the legend himself has quite a variety to satisfy the needs of all lovers of cannabis. The Cannabis Cup is basically heaven for any weed smoker. You can smoke many different strains of marijuana, meet today’s hottest celebrities, and even learn a thing or two about pot.

Tommy Chong had a booth where he sold his very own product, Chong’s Choice. Along with his flowers, oils, and blends, you can try some of his breath mints. These aren’t your typical breath mints, these bad boys alone can give you a pretty satisfying high.

Tommy considers Bernie Sanders to be “Commander in kush” material. He favors Bernie not only because he supports cannabis, but also because he doesn’t have to think before he speaks. When he’s asked questions, he spends little to no time thinking of a response. Bernie is practically the Jewish version of Jimmy Carter in his eyes, not the Evangelist one.

Tommy campaigns for Bernie because he’s from the heart and that’s the material he wants from a president. Bernie Sanders, if elected, would give states their own choice in the legalization of marijuana. Being that the future of cannabis is progressing, it only makes sense that Chong wants to see Bernie take over.

Apparently, Mr. D-O-Double G is a bogart, also known as someone who doesn’t share their smoke. Tommy Chong explains that Snoop does not like to pass. However, he does like to talk and let it burn. In the short video clip of Snoop and Chong, you can clearly see Chong getting a little irritated as the joint continues to burn in Snoop’s hand. No worries, Chong eventually gets his turn.

Speaking of getting his turn, Chong admits in the interview that there has been a time that he’s smoked too much weed. This coincidentally happened at a Snoop Dogg concert when he chose to clear the chamber on a 6 ft bong. He got high indeed, so high that he had to be carried out. It’s no wonder he didn’t remember much after that! Be sure to check out the interview so that you can hear all about it for yourself.

What did you think of the interview between Tommy Chong and Sean Evans? Let us know on social media or in the comments section below.