The DEA fakes robberies to confiscate cannabis without notifying suspects

A law intended to combat terrorism is now being used to confiscate weed without a warrant. 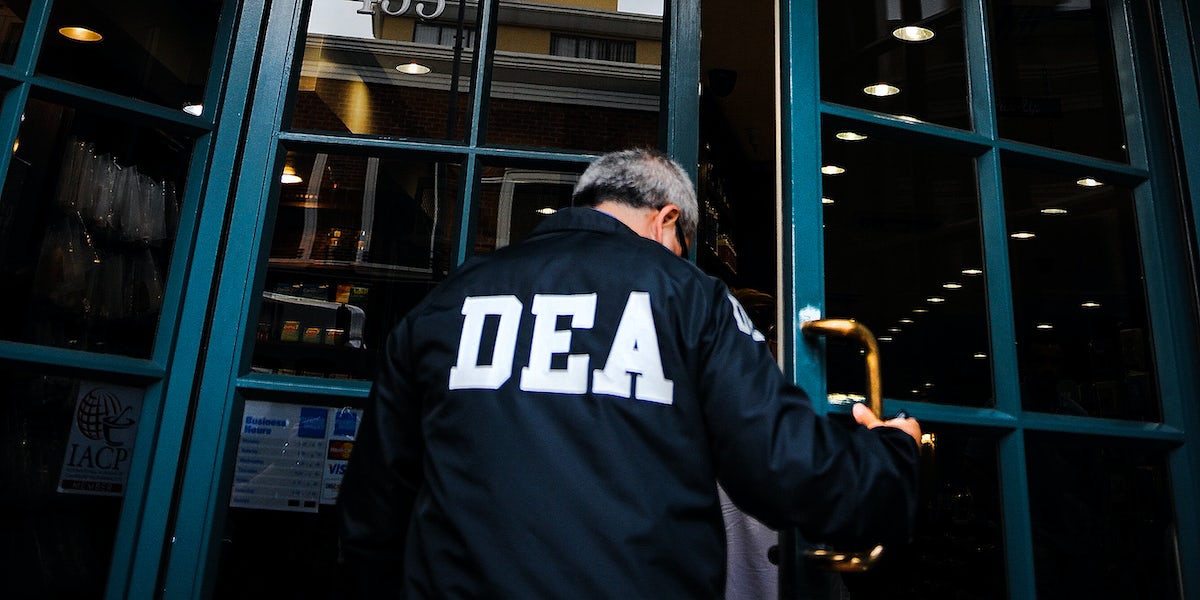 On a seemingly ordinary Saturday morning in December of 2017, Shawn Riley, the manager of a Portland storage business, led two customers to an empty unit in a routine pre-rental inspection. Once inside the storage unit, the customers pulled guns on Riley and demanded to know what had happened to nearly 500 pounds of marijuana they had stored at the facility weeks earlier.

Luckily for prosecutors, the gunmen recorded their encounter with Riley and when that video was shown before a courtroom, the 59-year-old manager was seen pleading with his attackers when they asked who had taken their stash. Riley recalled a robbery that had happened the week before and the explanation he gave stopped the gunmen right in their tracks.

“I think the police did. That is what my boss said,” Riley is heard saying in the video, “Then my boss said it wasn’t a break in.”

“You’re telling me the police took my shit?” one of the gunmen replies.

What the courtroom was watching, in a case first reported by The Oregonian, was the aftermath of a DEA tactic known as “sneak and peek” or delayed-notification warrants which allow law enforcement to search the homes, businesses, cars and property of suspects without offering the standard notification first.

The tactic was approved as a part of the 2001 US PATRIOT Act and is meant to be used as a tool for combating terrorism. “Sneak and peek” warrants are issued to law enforcement under the premise that a regular warrant, which requires prior notification, could tip the suspect off and compromise an investigation. A delayed notice, the theory goes, will allow investigators to track a suspect, see how they respond and hopefully lead officers to other suspects within terrorist cells.

While sneak and peek warrants are meant to be an anti-terror tactic, law enforcement has actually used them more frequently for drug cases, the majority of which are used to obtain information from a suspect’s phone.

With delayed notice warrants, law enforcement can provide notification of a search and seizure 30 days after the raid has occurred and can even ask for an extension of up to 90 days. In order for a court to approve such warrants, the officers who request it must prove that there is evidence the investigation could be seriously compromised if an individual is made aware that they are a suspect.

But critics have argued that warrants without prior notice violate Fourth Amendment rights which prohibit unreasonable search and seizure on the grounds that the ‘raid first, ask questions later’ nature of the law does not give an individual the opportunity to assert their rights before they are violated.

“Any protections afforded by a warrant are meaningless when the searching officer has complete and unsupervised discretion as to what, when and where to search and the individual owner is not provided notice so cannot assert and protect her rights,” the ACLU writes.

Because of the warrant’s secretive nature, law enforcement are allowed to disguise their searches as robberies and they often do, leaving both the suspect and local law enforcement confused.

In 2006, local law enforcement in Cleveland, Ohio were dumbfounded when they learned that a robbery which resulted in the confiscation of $2.8 million and half a ton of cannabis was really the result of a sneak and peak warrant executed by the DEA.

“The idea was to make the search look like a burglary so the suspected drug trafficker Chevalier Robinson, would think he was the victim of a break-in and not the subject of a major law enforcement investigation,” Ohio’s Attorney General at the time told the Cleveland Plain Dealer.

Get 20% off premium weed and discover the latest products, news, and deals in cannabis.
April 23, 2018 — Last Updated
Written by Miroslav Tomoski