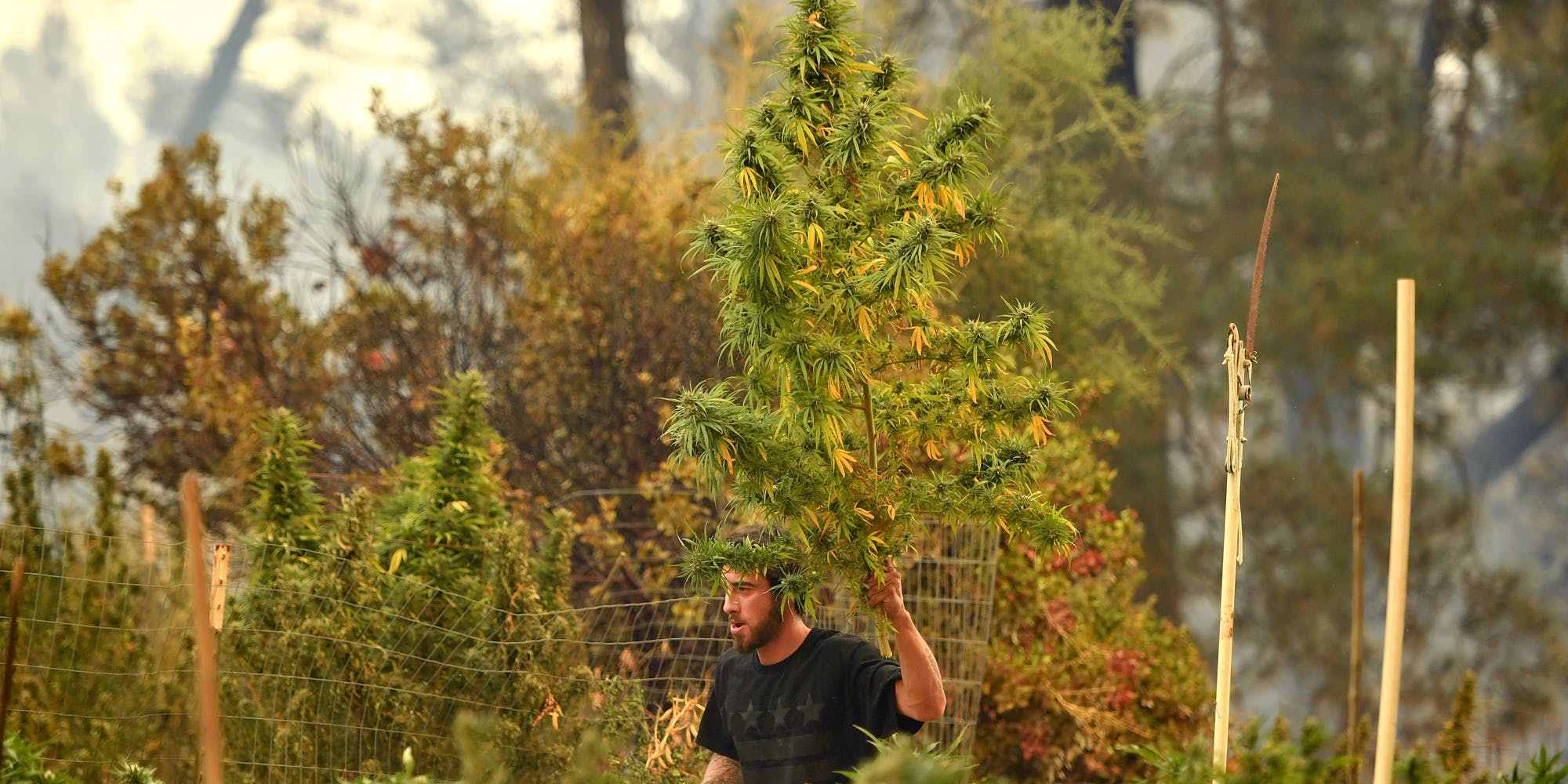 US-WILDFIRE
Anthony Lopez recovers what’s left of his marijuana crops after the Loma Fire tore through his neighborhood in the Santa Cruz Mountains near Loma Prieta, California on September 27, 2016. The Loma Fire has charred more than 1000 acres and burned multiple structures in the area. / AFP / Josh Edelson (Photo credit should read JOSH EDELSON/AFP/Getty Images)

They can’t afford to navigate the state’s complicated regulations.

Humboldt’s climate is near ideal for cannabis cultivation. That’s why the Emerald Triangle (a region encompassing Humboldt, Mendocino, and Trinity counties) became known—starting in the late 1960s and early ’70s—as the source of some of the best weed in the world.

A massive industry sprang up, almost overnight, free from the constraints of laws and taxation. Today, tens of thousands of people in the Triangle have been breaking the law there for generations.

Fathers and mothers passed family cultivation businesses down to their sons and daughters. With the transition of cannabis out of the grey market, these same families are now being told they need to hire accountants and lawyers. They’re expected to emerge into the harsh glare of taxation, and a byzantine complex of state rules. Part of that involves revealing themselves to a government that has for decades sought to arrest them for the way they live.

“We’re at that moment in the movie “Thelma and Louise” when they have driven the car off the cliff,” longtime Humboldt resident and environmentalist Scott Gracen told The Washington Post. “We’re just waiting for the impact.”

There are currently 12,500 black market cannabis farmers in Humboldt County. Fewer than 1 in 10 of those are expected to successfully become legal. That leaves some big questions about what, exactly, is the fate of what is looking more and more like a thing of fragile beauty: The long-standing culture of Humboldt.

A huge shift is underway. Optimists hope Humboldt, with its abundant natural beauty, will become a tourist destination. They believe tourists will want to learn about the county’s rich outlaw history and sample its potent artisanal strains of cannabis.

But for many, the seismic cultural shift is both painful and surreal. Long-time growers—who in many ways laid the foundation for California’s now-legal cannabis industry— are already leaving the county in droves for greener pastures.

While Humboldt’s remoteness was an asset during the black market days, now it’s a liability. Cultivation operations closer to the centers of marijuana consumption to the south are being licensed in places like Salinas and Santa Barbara. The proximity of infrastructure such as roads, railways and airports are important when it comes to commercial distribution.

To make it all worse, California’s cannabis licensing process is slow and difficult. Consequently, market projections by cannabis data specialists New Frontier indicate at least 25 percent of California’s market will continue to be illegal and tax-free.

Currently, statewide, an estimated 69,000 people grow cannabis in California. Less than one percent of growers have gotten a state cultivation license since January 1. Thousands of additional license applications are pending, but most pot farmers still haven’t even applied for one. The growing season begins in the next six weeks, and government officials are likely to enforce the law, albeit on an inconsistent and spotty basis.

The steep decline in cannabis prices is only making the transition to legality harder for farmers. Just three years ago, Humboldt cannabis used to sell for $1,200 a pound. Now, black market pounds commonly cost only 300 bucks. This is, in part, due to the overproduction of cannabis as well as California’s slowness in licensing dispensaries. There just aren’t enough businesses who can legally sell cannabis now. This is all happening at the same time that most growers need money in order to comply with California’s strict rules.

State regulators, along with many growers, believe California’s vast overproduction will be curtailed by the new legal market. How will that happen? A few large corporations, who can afford to navigate the state’s complicated and expensive regulations, are moving to consolidate production.

Meanwhile, an entire world of artisanal cultivation and designer strains is being threatened. Growers with no permit can be fined $10,000 a day. After 90 days, a lien is attached to their property.