Hippies, Hitchhikers, and Nomads: BC’s Fruit Pickers And The Summer Of Freedom (Photos) 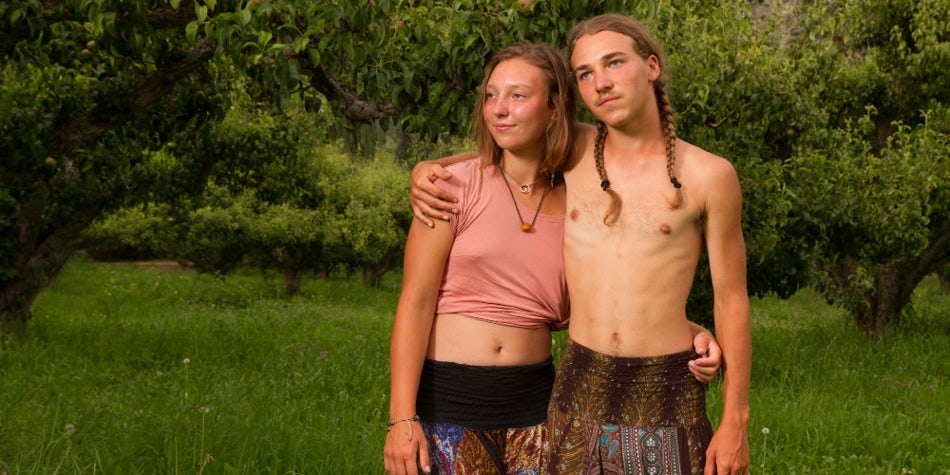 When I called Chris MacArthur, he had just cut down his annual crop of weed.
“I had these growing on my balcony all summer, and then my landlord on Friday was like ‘Chris, I gotta come by.’ I was like ‘Fuuuck.’ At this point, the plants are humongous, tall and in tubs. So Friday night, in the darkness, I loaded my pickup truck and drove them out to a train yard on the East side of town in this desolate, abandoned field and I put them out there. […] By yesterday afternoon it was time to go and harvest, so I drove way back out there and for the first time in two or three weeks it just starts to rain, pouring rain, and I’m out there in this field, like, hacking the weed down and putting it in these big IKEA bags just to look discrete, and then I’m running back through this massive field and throwing [the bags in the truck], and I get home, I hang the things, and then I got an e-mail from you.”

Clearly, harvesting pot isn’t his usual gig. MacArthur is a photographer who, in 2015, captured images of some of the nomadic fruit pickers who work in his father’s town: Keremeos, British Columbia. He decided to shoot some of the “hippie fruit pickers” who would hole up in the town for a couple of months every year.

Mainly they were chill kids who were down to get baked and party. MacArthur would come up to them for a chat, photography off to the side of his mind. “I’d always bring a case of beer,” he says, “like ‘Yo, you want a beer? Let’s hang out.’ […] I really spend a lot of time with these people.”

The pickers weren’t vagrants, just kids in a transitional stage—from high school to college, from college to work, the way that some people would go on a backpacking trip to Europe.

“You’d think that they hop trains all over the country and live under a bridge,” says MacArthur, “that would be a person’s first impression, I think. [But] it’s just kind of one of those rituals of finishing an era.”

“It was very obvious to me that it was [these kids’] first time away from home, doing something really different. You can tell that these people are trying to ‘find themselves.’ […] They’re kind of on this soul-searching journey. […] It’s predominantly Quebecois people and European people. People who [live] in [this region], they don’t really pick fruit.”

“There’s also all these Mexican people, and people from South America that come. Some of these people were doing it for years […] The fruit-picker community is just a very eclectic bunch. There’s no shortage of surprises as [to] where they came from, where they’re going, what their next plan is.”

It’s not necessarily as enlightening an experience for the townies. “Sometimes there’s tension between the locals and the fruit-pickers. […] I think quite often their image is very off-putting to [locals], who are blue-collar, hard-working regular Joes.”

“They get a bit offended, or they’re not open-minded enough to see these people with ‘long hair, and tattoos, and hula hoops, fuckin’ banjos,’ whatever. […] It’s a significant change in the town [when] the population surges for a month or two months, and there’s a lot more activity. […] It’s a tricky thing because they get annoyed; they feel that [the pickers] don’t respect the town.”

“But at the same time, they eat at all of the restaurants, they provide the cheap labor that is needed to sustain these businesses that these people have, so it’s this tricky situation. [My dad] knows everybody in town so we’ll go hang out and there are always comments to be made about the fruit pickers. ‘I saw this one guy, he had a something something!’ It makes for a lot of discussion in the town.”

Get 20% off premium weed and discover the latest products, news, and deals in cannabis.
October 05, 2017 — Last Updated January 09, 2020
Written by Charlie Tetiyevsky