G-13 is a strain with a story. Perhaps bred by government workers at the University of Mississippi in the 1960s, this indica-dominant hybrid has been couch-locking cannabis lovers ever since.

G-13 has some serious lore around it and a long history of storytelling that has made it an icon in the marijuana community. Rumor has it that this strain is a product of a super plant produced by the U.S. government. Back in the early 1960s, government scientists supposedly bred some of the strongest cannabis in the world together over 13 generations. The end product was Indica-dominant G-13.

A clone of this powerhouse then somehow managed to escape to the underground cannabis scene in the 70s and 80s. This strain then became more popular when it was showcased in the 1990s hit film, American Beauty. Is any of this true? Who knows. But, it’s a definite fact that this strain packs a punch. What’s more, it’s unlikely that modern-day G-13 strains are original cuts.

Marijuana consumers still love this Indica for the potent body high and cerebral, euphoric effects. You might feel a quick surge in creativity before the slow-onset physical effects kick in. G-13 is perfect for winding down or passing time on a rainy day. But, don’t expect to get much done with this one.

You may find yourself fading in and out or ready for a nap with this strain. Even small amounts will induce a powerful and long-lasting physical experience that is sedative and relaxing. The world slows down after a few tastes of this strain.

Be prepared with some snacks, as this herb is well-known for inspiring a bad case of the munchies. You may not be up for a long walk, but heading to a nice restaurant or wandering into the kitchen for some tasty bites are pretty standard for the experience.

Medical cannabis consumers like G-13 for treating chronic pain, autoimmune diseases, inflammation, and gastrointestinal distress. Stress, pain, and headaches are also left by the wayside after G-13. Though, the Indica genetics of this herb make it best for evening and nighttime use. This strain’s relaxing effects are accompanied by a strong, earthy sweet aroma.

New cannabis consumers should be warned – this bud is powerful medicine. Those without much of a tolerance may quickly find themselves stuck on the couch or ready for bed. 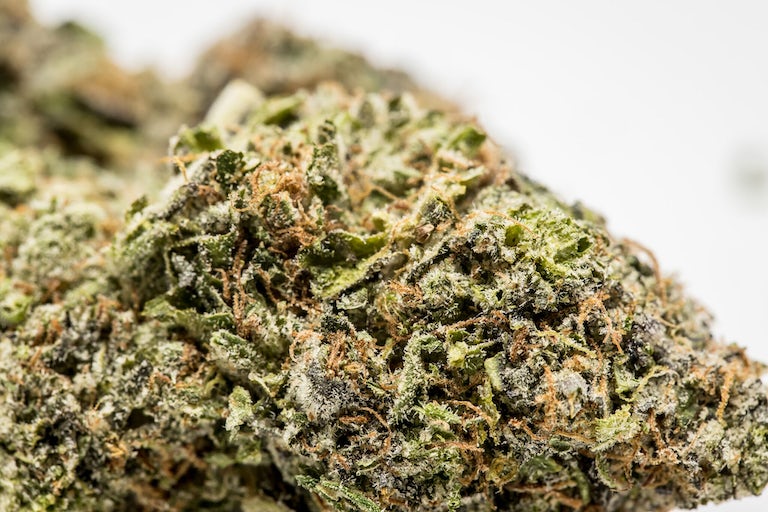 According to legend, this strain is the product of experiments conducted by the CIA in the 1960s. It is said to be derived from pure Afghani clones which were labeled G-1 through 23 of which G-13 was the most powerful. Though its true origins are unknown.

This clone-only strain has an earthy sweet aroma that will remind you of wild berries. This strain’s distinct skunky, earthy smell is an unmistakably unique and worthy of its fabled status. If the legend behind this strain has ever been in doubt its sweet pine taste puts those questions right to bed.

While G-13 may not be drop dead gorgeous, it’s still has its own appeal. Sage and forest green calyx’s and ample brown-orange hairs transform it’s dense and sticky buds into a beautiful bouquet of colors. Expect a decent coating of frosty white trichomes.

Not to mention, it’s considered one of the most powerful indica strains available, with a THC content that easily reaches over 20% in proper growth environments.

While its origins are unknown, this strain has become popular today among doctors and medical marijuana patients for its medicinal effects. Patients praise this strain for its uplifting qualities and relaxing effects as a pain reliever.

Enjoy the latest and greatest from Herb, enter your email below to get exciting cannabis updates delivered to your inbox.
August 25, 2016 — Last Updated
Written by Anna Wilcox