How to buy CBD Oil in all 50 states: the complete guide

No matter what state you live in, this is how to buy CBD oil legally and safely. 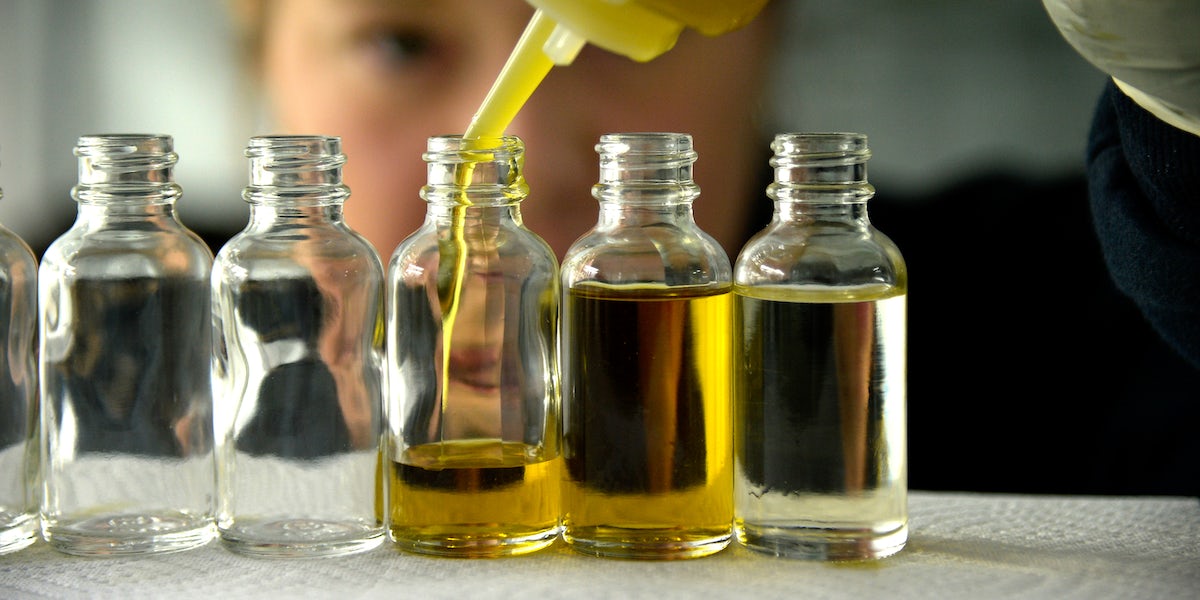 LONGMONT, CO. October 10, – Janea Cox, director of the Flowering H.O.P.E. Foundation bottle the oil Haleigh’s Hope. People in Colorado Springs need their medication and Janea is more than willing to make the drive from the Springs to Longmont to help. October 10, 2014 Longmont, CO (Photo By Joe Amon/The Denver Post via Getty Images)

How is it Legal to Buy CBD Oil?

You may have noticed that CBD oil and other CBD products have blown up recently. People are using CBD for everything from epilepsy to anxiety and chronic pain. But, what you might not know is that you don’t have to live in an adult-use cannabis state to buy CBD oil.

That’s because, just a few years ago, the U.S. federal government passed the Agricultural Act of 2014, sometimes known as the Farm Bill, which allows for the cultivation of industrial hemp in “limited” state-sponsored programs.

According to Section 7606 of the Farm Bill, industrial hemp is defined as:

“[…] the plant Cannabis sativa L. and any part of such plant, whether growing or not, with a delta-9 tetrahydrocannabinol concentration of not more than 0.3 percent on a dry weight basis.”

Scientifically, there is no real distinction between “industrial hemp” plants and “Cannabis sativa L.” plants. However, according to U.S. law, industrial hemp plants have 0.3% of THC or less. The Farm Bill doesn’t actually mention CBD – putting the cannabinoid and its extracts into a legal gray area many “ganjapreneurs” are taking advantage of.

Remember, CBD is one of over 80 cannabinoids in the cannabis or hemp plant, like THC. Except, unlike THC, CBD is non-psychoactive and so doesn’t produce a “high.” (so, you won’t have to care about how to detox) It does, however, have tons of medical benefits, including:

CBD and the Law

Even though you can buy CBD oil extracted from hemp “basically” legally under the Farm Bill, the Controlled Substances Act of 1970 (CSA) makes things complicated. The CSA is the same law that placed all drugs into categories, or “schedules,” according to their potential for abuse and medical benefits.

Cannabis was originally placed in Schedule I temporarily back in the 70’s while researchers, led by Raymond B. Shafer, explored the plant’s potential medical benefits. The Shafer Commission actually suggested cannabis be removed from Schedule I and regulated more like alcohol back in 1972. Unfortunately, that recommendation was ignored by the White House at the time and ever since, and the plant we all know and love remains in Schedule I.

It gets even trickier. The CSA defines marijuana as:

“The term marijuana means all parts of the plant Cannabis sativa L., whether growing or not; the seeds thereof; the resin extracted from any part of such plant; and every compound, manufacture, salt, derivative, mixture, or preparation of such plant, its seeds or resin.”

Obviously, this definition makes no mention of percent THC or other cannabinoids. To make matters more complicated, the DEA has also been rather strict when it comes to CBD oil. In December 2016, the DEA released a new drug code for CBD, where they define “cannabis extract” as the following:

“Meaning an extract containing one or more cannabinoids that has been derived from any plant of the genus Cannabis, other than the separated resin (whether crude or purified) obtained from the plant.’ Extracts of marihuana will continue to be treated as Schedule I controlled substances.”

That means, all cannabinoids, including CBD, are considered illicit by the DEA, which is totally lame. However, the Farm Bill still stands, so you can still buy CBD oil as long as there’s less than 0.3% THC, hence the “legal gray area.” There are many petitions you can sign to keep CBD off the “Schedule I” list of drugs on change.org.

Regardless, you can still buy CBD oil online and get it shipped to anywhere in the U.S.. Even more conservative states, like Alabama, Georgia, Mississippi, and Kentucky have “CBD-only” laws. Governors of these states have allowed their citizens to buy CBD oil without fully legalizing medical marijuana. Often, these governors were convinced by families of children who suffer from extreme, intractable forms of epilepsy that only CBD could help.

There are also some countries with previously strict cannabis laws passing “CBD-only” laws as well, like Mexico. Although, these laws are not the best solution because THC also has an abundance of medical uses and “whole plant medicine” is so effective, they are still small steps in the right direction.

What’s more, a weird loophole in the CSA has also made CBD and hemp oil extracted from imported cannabis stalk or seeds legal. So, often when you’re buying legal CBD products, it will be advertised that the product is made with imported hemp from France or other European countries.

Which CBD Oils and Products to Buy?

When you’re ready to start shopping and buy CBD oil online, you’ll notice there are tons of choices and it can be a bit daunting. But, we’ve got some tips and recommended brands to make it easier.

First of all, it’s important to read the label and make sure the CBD oil was tested by a third party lab. This ensures the product is safe and of high quality. Otherwise, brands can make all sorts of claims without any test results to back them up.

As far as trusted CBD oil brands, we’d recommend checking these out when you’re ready to buy CBD oil:

Check out Herb’s full coverage on best CBD oils and products on the market here.

CBD oil derived from hemp is legal to buy and get shipped to your door as long as there is less than 0.3% THC. Never feel left out again that the West Coast and Colorado get all the good stuff and buy CBD oil for wellness today.

Enjoy the latest and greatest from Herb, enter your email below to get exciting cannabis updates delivered to your inbox.
March 03, 2018 — Last Updated
Written by Michelle Janikian