How Long Does Weed Stay In Your Urine?

It depends on how often and how much you smoke. Find out everything you need to know to pass a drug test. 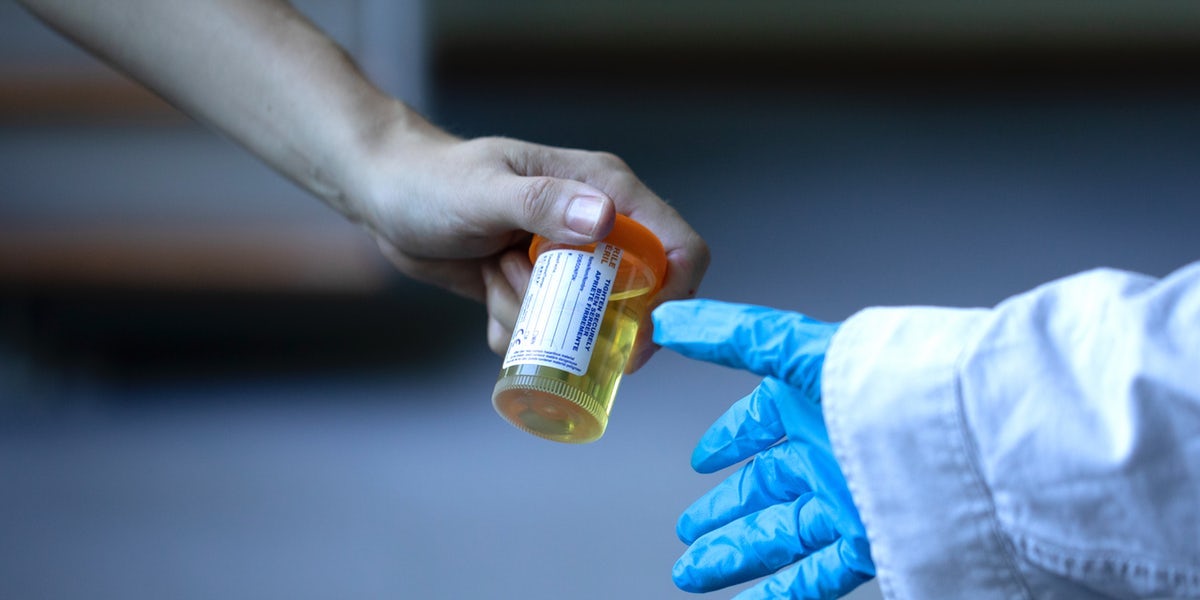 Given the tendency of a lot of employers to test your urine for substances, it’s no wonder that cannabis users are worried about risking their employment prospects. When there’s a lot on the line, it pays to be aware of just how long those incriminating cannabinoids hang around. Knowledge is power, and in this case, it can also mean keeping your job.

The length of time that THC stays in your urine depends on a number of factors, but mostly it depends on how frequently you consume marijuana. The body’s fat cells bind really well with cannabis metabolites and as you consume more weed, the THC accumulates. That means if you’re a heavy smoker, it’s going to take a while for the weed to no longer be in your urine.

Detection Windows Based On Cannabis Use

If you’ve only smoked pot one time, you can still test positive in a urinalysis test for up to eight days. Folks who smoke two to four times a week will test positive for up to 18 days. Regular users are usually flagged by the tests for up to 30 days and the heaviest users have tested positive from 45 days to an incredible 77 days later.

If you’re the type of marijuana consumer who does multiple dabs a day (learn what is dabbing), or consumes full extract cannabis oil, as medical marijuana patients do to control pain, your period of vulnerability to urine testing will extend well over two months.

Urinalysis doesn’t test for THC itself. Instead, it looks for a THC metabolite, THC-COOH. When this is present in your urine, it means your body has recently processed THC.

The major downside to this is that it can lead to people testing positive for pot a long time after they’ve used it and the THC is going to be detectable in your urine for up to 30 days regardless of how you consume it.

THC, CBD, and the rest of the cannabinoids have metabolic byproducts, called metabolites. These substances are lipid-soluble, meaning they accumulate in fat deposits throughout the body. They slowly are excreted through urine over time. It’s almost as if the human body likes the metabolites of THC because rather than getting rid of them immediately, like it does with other substances, it holds onto them for extended periods of time.

Your body eliminates many waste metabolites through urine. One of those, is our friend THC-COOH, which is also referred to as a carboxy. To get rid of things like THC-COOH, the human body utilizes something called glucuronic acid, which binds to the metabolites before they pass out of the body in the urine stream.

The truth is that it doesn’t really matter how you consume cannabis, whther it be edibles, oils or smoking it will generally result in the same level of THC-COOH. With edibles, there is more conversion of THC to THCCOOH, which is what urine tests look for. Since metabolism of edibles is slower, the amount of time it takes to reach peak THC in blood is delayed. As a result, edibles can be a bit stronger, both in their effects and in THC content, but for the most part they will only extend the time that THC-COOH stays in your system by a day or so.

How To Pass A Urine Test

For many, the real question at hand isn’t “how long does weed stay in your urine?”, but “are there ways to beat a drug test?” The short answer is yes if you’re as willing to bend the rules. Different labs determine “positive” differently.

The most common cutoff for urine tests is 50 nanograms of THC-COOH per milliliter (ng/mL). Cutoffs can be as low as 15 ng/mL and as high as 100 ng/mL. Each of these cutoff points, of course, results in a widely different window of detection.

Urine testing is usually a two-step process, the first step being a standard cutoff point of 50 ng/mL. Positive tests at this level are often sent off for confirmation with a more sensitive assessment that uses the 15 ng/ML sensitivity.

Two main factors play huge roles in how long weed stays in your urine. First, there’s your metabolic rate. If you have a faster metabolism, your body will get rid of THC-COOH at a faster rate.

The second big factor is your level of hydration. The more fluids your body is processing, the faster weed metabolites will exit your system. For this reason, it’s good to stay reasonably hydrated in the weeks following up on your test, but don’t just drink a bunch of water in the day or so before. This can actually backfire because your urine can get so diluted that the sample comes back unusable. In the worst-case scenario, this will also cause the administrator to flag your test and force you to do a supervised one next time. In the best-case scenario, they’ll just ask you to come back and this will give you more time to get the THC out of your urine.

The same timeline applies to exercise. Exercise will help you break down the fat cells that are holding onto the THC so it’s good to do some working out in the weeks before the test. However, you can’t just hop on the treadmill 24 hours before you go in for the urinalysis. In fact, if you do this, you might increase your chances of testing positive.

There are products available. They include detox pills and detox drinks which are made for the sole purpose of allowing you to pass a urine test after smoking marijuana.

There is also synthetic urine available, amazingly enough. Just make sure you’re investing in a quality brand like Quick Luck to deliver a clean sample. It’s also best to keep in mind that you have to be careful with lab urine if monitored pee testing is required.

Can I Use Fruit Pectin To Pass A Urine Test?

There isn’t any proof it works, but some stoners do this. Fruit pectin is a starch made from the cell walls of produce. It’s often used to lend texture to jams and jellies. Well-stocked, larger grocery stores should have it.

The theory is that because fruit pectin is a natural fiber, it makes more THC exit through the bowels rather than through the urine, as it usually would.

• Mix fruit pectin with an electrolyte drink (Gatorade, for example)

• Drink it at least two hours before a urine test. Having it once a day before the test might be a good idea as well.

• Chase that with a bottle (or two) of water and some B vitamins.

Enjoy the latest and greatest from Herb, enter your email below to get exciting cannabis updates delivered to your inbox.
August 13, 2019 — Last Updated January 18, 2021
Written by Steve Elliott

Effects like stress reduction, helping you feel more comfortable in your own skin, and prompting you towards a more sociable, funn…

Hoping to start growing indoors? To help start you off on the right foot, here are 8 steps to building the perfect indoor grow roo…