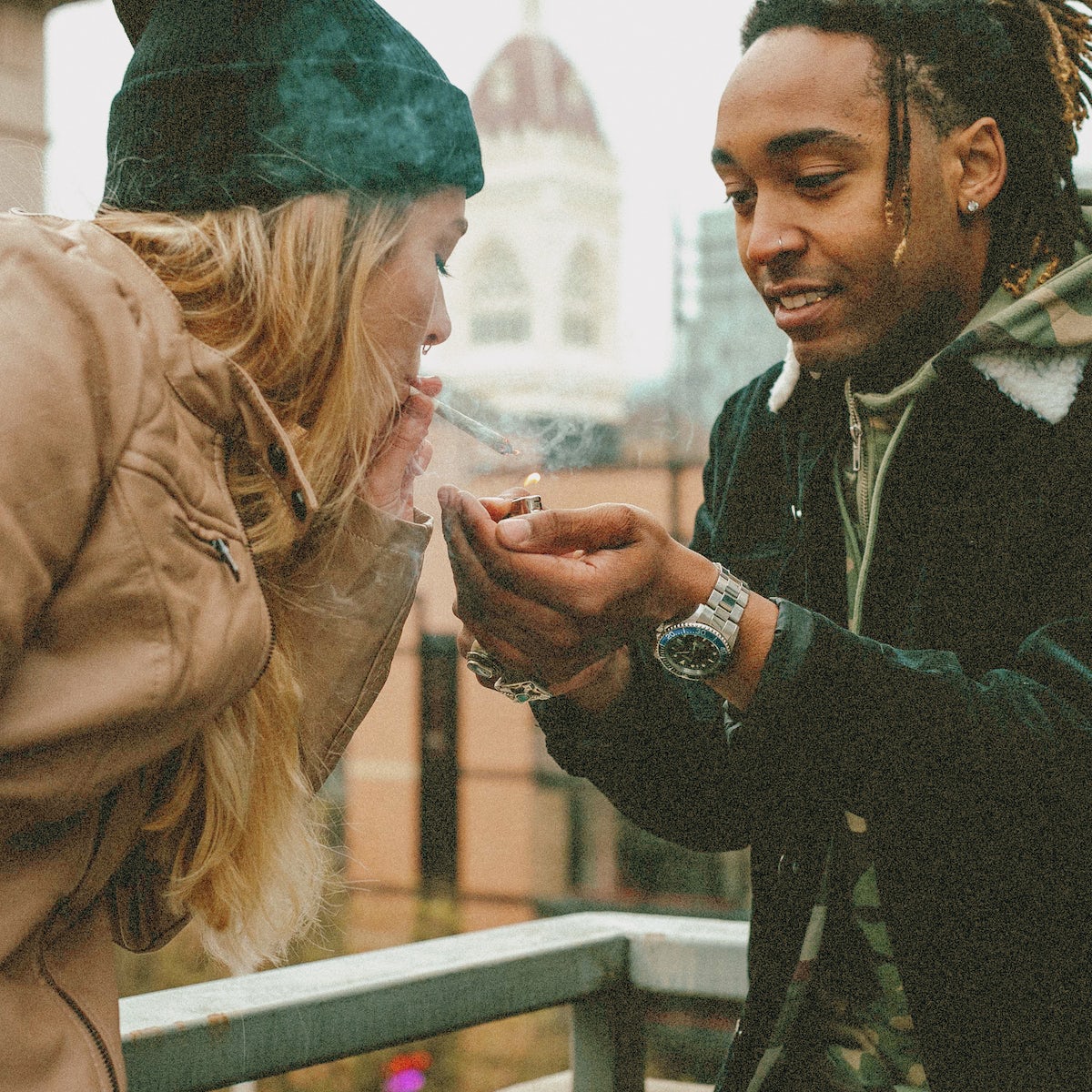 From hungry to drowsy to paranoid, even friends sharing the same bud can have surprisingly different reactions to the herb. Women, for example, may be more sensitive to the intoxicating effects of THC and may develop tolerance more quickly as a result. Men, however, may be more likely to experience hunger from THC. There may even be instances when weed does not affect some people, at least when they consume cannabis in specific ways. Overall, cannabis affects everyone differently. Here’s why.

What Causes a High?

Did you know that chemicals in the cannabis plant hijack the landing sites for molecules that your body produces naturally? After smoking a little weed, there is one compound in question that produces a psychoactive “high.” That molecule is tetrahydrocannabinol (THC). THC works by engaging special receptor sites on the surface of nerve and immune cells. These receptor sites, called cannabinoid receptors, are like the landing places for THC. When THC takes over these receptor sites, it prevents other molecules from binding in these locations.

As it turns out, these cannabinoid receptors are abundant in several intriguing brain regions. They are rampant in the hypothalamus, which is a central region that is responsible for overseeing your metabolic rate, biological clock, hormonal production, and your internal thermostat. Cannabinoid receptors are also abundant in the amygdala, which is responsible for processing memory, fear, and emotion. As the theory goes, when THC engages these brain regions, it stays locked into these cell receptors longer than the compounds that would otherwise be there naturally.

Amazingly, one of the compounds that cannabis replaces in the body is an endocannabinoid called anandamide. Or, more commonly, “the bliss molecule.” Anandamide earned its name thanks to its prospective relaxing effects; it’s a molecule that simply helps you feel content and comfortable, among many other things. When THC takes over for anandamide, you can expect long-lasting and more potent effects than the original endocannabinoid typically provides. When you’re lifted, you might feel more euphoric, care-free, and perhaps even a little drowsy.

Does Weed not Affect Some People?

Every human being has cannabinoid receptors. For this reason, it is assumed that every person can experience at least some effect from cannabis. If you’re not getting high, however, there may be a few operator- and physiological problems that prevent you from feeling the euphoric qualities of cannabis. Here is what to consider if you feel that cannabis is not affecting you:

One of the most common reasons why some people may not experience the effects of cannabis is due to improper inhalation. Smoking is one of the most popular ways to consume the herb, though it can take a few tries for many new consumers to feel the active effects of cannabis. If you do not properly inhale, then the active compounds in the plant will not successfully enter the lungs and absorb into the bloodstream.

Here are a couple of simple directions that will help you inhale cannabis:

Unfortunately, coughing often follows the inhalation of cannabis smoke. Smoke vapor can be hot and irritating to the tissues of the mouth, throat, and lungs. With practice, you will likely cough less and develop better control over your breath.

Some people just don’t get high from cannabis edibles. Unlike inhaled cannabis, edibles and oral cannabis preparations must first be digested and metabolized before you can feel the effects. But, here’s the catch—some people may metabolize THC just a little too well. After absorption through the walls of the intestines, cannabis compounds like THC make their way into the liver.

The liver is the primary detoxifying organ in the human body, tagging potential toxins and drugs by changing their chemical composition. Most of the time, the liver converts active drugs into more inactive compounds. THC, however, is a little unique. In most people, the liver actually metabolizes THC into a more psychoactive molecule, 11-hydroxy-THC. This metabolite is often thought to be more potent than the original THC.  For this reason, a high from an edible is often stronger and more incapacitating than your average bong hit.

For some people, however, this may not be the case. It is speculated that many people have genetic variations that may make them more or less efficient in breaking down drugs like THC. Some people may not always convert high levels of THC into its more active form. These people may not experience the psychoactive effects of edibles. Inhaled consumption methods, like smoking and vaporization, are likely preferable to these people.

Some people with certain medical conditions, for example, consume the herb and feel more normal. It’s not uncommon to hear that people who consume medical cannabis feel more comfortable and more like themselves after consuming cannabis. Some researchers have hypothesized that many medical conditions may be caused by changes to the endocannabinoid system. If this is the case, it is understandable that some patients with certain health conditions may not experience the psychoactive effects of cannabis as much as others. Of course, this is merely a hypothesis.

Neurologist and medical researcher Dr. Ethan Russo thinks that some people may have what is called an endocannabinoid deficiency. Simply stated, your body is not producing enough anandamide or other endocannabinoid molecules. As mentioned above, when you inhale or eat the psychoactive plant, THC hijacks the cell receptor where human endocannabinoids would normally land. By doing so, THC taps into a larger network called the endocannabinoid system.

This system is the largest neurotransmitter network in the body, and it controls a variety of key bodily functions. Some of these functions include:

Russo theorizes that people with certain medical conditions may not produce enough of these endocannabinoids in the first place. Specifically, those with migraines, fibromyalgia, and IBS. Some mental health conditions like post-traumatic stress disorder and bipolar disorder may also have some sort of endocannabinoid dysfunction. If this is the case, those with some of these conditions may experience cannabis a bit differently than others. So, the outcome of your high may be dependent on your endocannabinoid tone and health status in the first place.

Why Cannabis Affects Everyone Differently

Shortly after Israeli chemist, Rafael Mechoulam discovered psychoactive THC, he decided to test it out on his friends. He invited them over for some cake and gave them each 10mg of pure THC. And then? He recorded the results. Here’s what he had to say about the experiment:

All of those who took THC were affected. But, surprisingly, they were affected differently. Some said: ‘well, we just feel kind of strange, in a different world, we want to sit back and enjoy. Another one said ‘nothing happens’, but he didn’t stop talking all the time. A third one said, ‘well, nothing’s happened’, but every 15-20 seconds he’ll burst out laughing. These effects are all well-known today. People are differently affected. In one case, however, one of the participants got into an anxiety state. She felt, I believe, that her psychological guards [were] breaking down.

With this simple experiment, Mechoulam figured out that cannabis can produce a variety of effects among different people. Today, we’re still learning about the nuances regarding how cannabis affects individuals in unique ways. Here are the leading hypotheses so far.

Your genes may influence how you experience cannabis. Recent research has shown that some with a certain genetic mutation in the AKT1 are more inclined to feel anxious, paranoid, and experience psychotic effects from cannabis. Additional research has shown that genetics contribute to varying levels of cognitive function while high. Specifically, your genes might make you more likely to have memory impairment from THC than your smoking buddy.

As another bonus, if these lucky few do smoke cannabis, they experience less severe withdrawal symptoms than those without this so-called “bliss gene.” So, as you can see, genetics can cause quite a lot of variability in how an individual processes cannabis. At this point, however, we’re still only beginning to understand how your genes may influence how your body responds to and processes cannabis. Even with the uncertainty, the research so far has been fascinating.

Cannabis affects men and women differently. Men are more likely to get the munchies than the ladies.But, women are more sensitive to the herb overall. Some early studies even suggest that women may find more pain relief from the herb than men do, but this hasn’t proven to be true every time the herb is put to the test in scientific research.  Further, hormones may have a strong role to play in how a person responds to THC. Is it that time of the month, ladies? Well, that has an influence, too. THC, the primary psychoactive in the plant, engages in a close dance with estrogen. The effects of THC are expected to be most powerful in women after estrogen levels are at their peak.

For a diet example, endocannabinoids are derived from fatty acids. If your diet is low in healthy fats, your endocannabinoid system may likely be out of whack. Cannabis feels good to those who don’t have many endocannabinoids. Yet, the herb may feel a little over-the-top to those who don’t need a boost. Your internal chemistry at any given moment can influence your high. Further, no two people are alike in terms of biochemistry. So, while we can expect some general trends from the herb, the experience is quite individual.

If you smoke a lot of cannabis, you’re going to respond very differently to the herb than someone who does not. The more you consume, the greater your tolerance. Your body becomes used to it, and you are less sensitive to the plant’s effects. Someone who has never tried cannabis before will react differently to the same strain and dose. Their body simply is not used to the sudden influx of plant cannabinoids.

Well, there you have it! There are many reasons why cannabis affects each person differently. Your health, genetic makeup, and lifestyle all contribute to how you experience the herb. So, the next time you feel like ordering a pizza while your friend is too paranoid to answer the door, there’s a reason for that.

Enjoy the latest and greatest from Herb, enter your email below to get exciting cannabis updates delivered to your inbox.
February 13, 2019 — Last Updated
Written by Anna Wilcox