It’s important to recognize early signs of cannabis diseases so you can treat them before they destroy your plants. 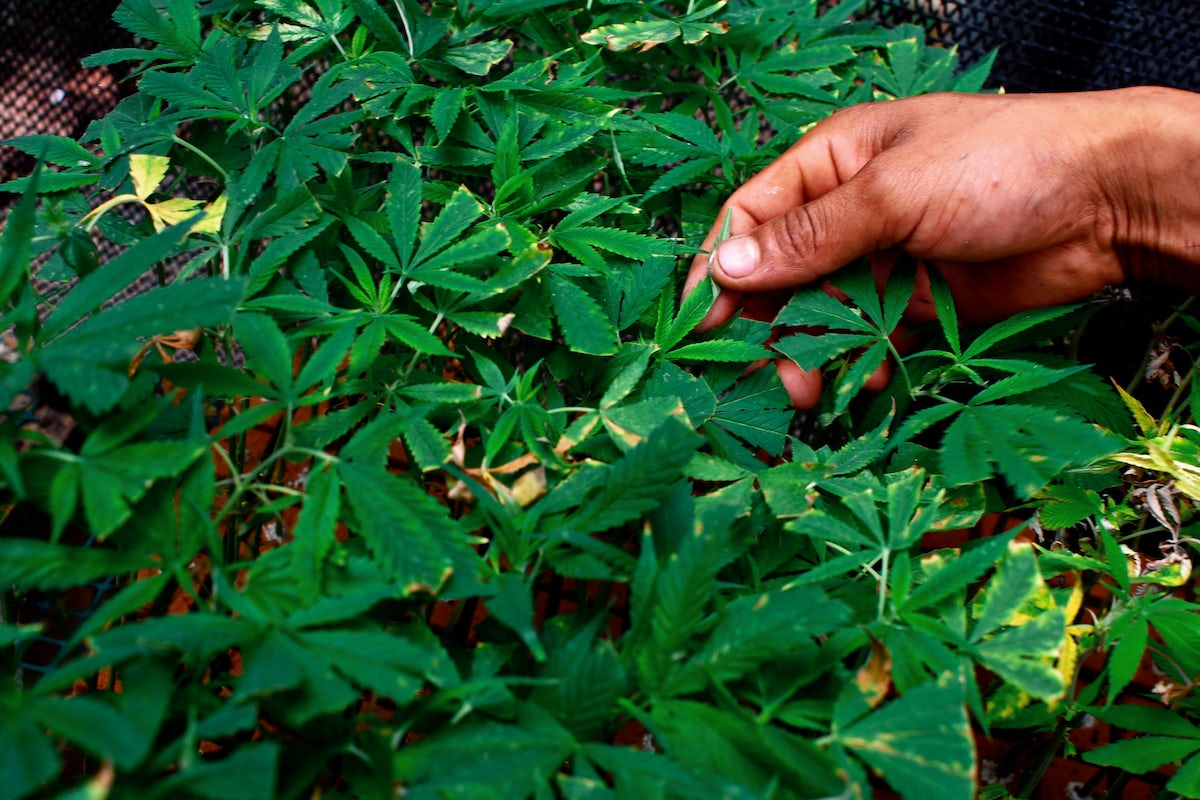 Being sick is a total bummer and your cannabis plants think so too. There are many diseases that a cannabis plant can contract and many of them are caused fungal infections and a lack of cleanliness in the grow room. Here are some of the most common canna-illnesses you might encounter while growing.

What is Leaf Spot?

Leaf Spot is a common disease for cannabis plants in which the leaves of the plant begin to develop dry, dark brown spots that could grow to engulf the entire leaf. Cannabis plants that have developed leaf spot are not likely to die, but their growth can be stunted and will yield far less harvestable buds.

Leaf Spot is caused by excessive watering which can lead to fungal infections as well as nematodes which can carry these spot-causing fungi and bacteria. It could also be a sign of overfeeding, particularly for nitrogen, or overheating of plants that are grown under HID lights.

There are sprays that can be purchased to fight leaf spot as it appears, but it’s recommended to avoid overuse of these sprays.

As with any type of disease or pest, preventing leaf spot comes down to keeping a clean and well-maintained grow room. Ensure that the grow room is not excessively humid and that the leaves are kept dry when watering to avoid fungal growth.

Identifying this disease in a cannabis plant can be rather simple as leaves will develop noticeable dry spots that are brown or black in color. Spots may continue to spread throughout the foliage until it completely dries out and falls off. Remove leaves which develop the signs of leaf spot and dispose of them to prevent the symptoms from spreading.

What is Powdery Mildew?

Also known as downy mildew or just mildew, this disease is one of the easiest to spot on the tops of leaves, however, a cannabis plant may be infected with this disease long before its obvious signs begin to appear. Powdery mildew can affect a plants ability to take in nutrients causing foliage to discolor and wilt.

Since this is a fungal disease, the best way to prevent it is to keep humidity levels in the grow room low and avoid overwatering and cold dark conditions with poor air flow which could create the ideal environment for fungus.

Sulfur can be applied to the foliage of a plant when powdery mildew is present, however, according to Jorge Cervantes’ Cannabis Encyclopedia, this will only remove the surface level symptoms of the disease and could produce a bad taste in the harvested bud. In fact, master growers often recommend destroying damaged plant material as there is no other guaranteed way to control the spread of this disease and it could potentially harm those who smoke plants infected with it.

Powdery Mildew, as its name might suggest, appears on the leaves of the cannabis plant in the form of a white powder that looks as though the plant has been sprinkled with baking soda. Once these symptoms appear, the plant is fully infected and it may be impossible to reverse.

What is Root Rot?

Root rot is the name given to a variety of fungal diseases that affect the root system, the most common of which is known as Pythium. This disease can spread quickly and stunt the growth of entire crops. Growing media which are prone to excessive moisture, like peat, can be susceptible to root rot. It is important to keep the grow room and the tools you use clean and sterilized to avoid infections. Roots that have been starved of oxygen are also known to develop root rot. In this case, ensuring that hydro-grows are kept well aerated is vital.

Pests like Root Aphids and Fungus Gnats can chew away at the fine root fibers causing openings for infections to take hold and cause root rot.

Infected root systems begin to turn from a healthy white to a dark brown color rendering them unable to absorb nutrients. In the most extreme cases the rot will extend up the stem and cause foliage to dry up or wilt and fall. Hydroponic systems are the best growing option for monitoring roots making it easy to identify and cure root rot since there is no soil to obstruct the growers view of the root system. In the early stages, root tips will appear dead and brown while later roots may appear slimy.

Gray Mold is the ultimate predator for plants of every kind. It attacks every part of the cannabis plant, from seeds to dried bud in a jar. It’s a fuck-ugly disease that is identified by its grayish black color and visible spores on the stems of the plant or the buds. Gray mold thrives in excessively humid grow rooms where there is poor air circulation. Keep your grow room’s humidity below 50 percent and be sure to space plants out adequately for sufficient airflow. The spores of this fungi are present in the air at all times, which is why it’s important to avoid creating optimal conditions for it to grow as well as to keep an eye out for caterpillars and other pests which can allow the fungi to enter.

Dark green or brown in color, algae can develop in excessively humid or moist environments, particularly in hydroponic grows. As it is plant-based, algae requires a well-lit environment in which to grow and is more dangerous as a breeding ground for pests than it is for any damage it can do in and of itself. Algae can attract pests like fungus gnats which can damage roots systems and cause the spreading of other diseases. Luckily, prevention of algae is easy as it cannot grow in poorly lit places. Keeping the grow medium and nutrient solution in light-proof containers and reservoirs can prevent the growth of algae.

Cannabis can be susceptible to mold even after it’s been harvested and cured—especially if it has been cured improperly. Mold is often easy to spot. It appears white or grayish and fuzzy while the infected buds can appear discolored. Infected buds can also have the distinctly chemical-like smell of ammonia. Properly dried buds contain no more than 10 percent moisture. To avoid the chances of dried buds developing mold, ensure that they are thoroughly dried before storing them.

Get 20% off premium weed and discover the latest products, news, and deals in cannabis.
December 06, 2018 — Last Updated April 24, 2020
Written by Miroslav Tomoski