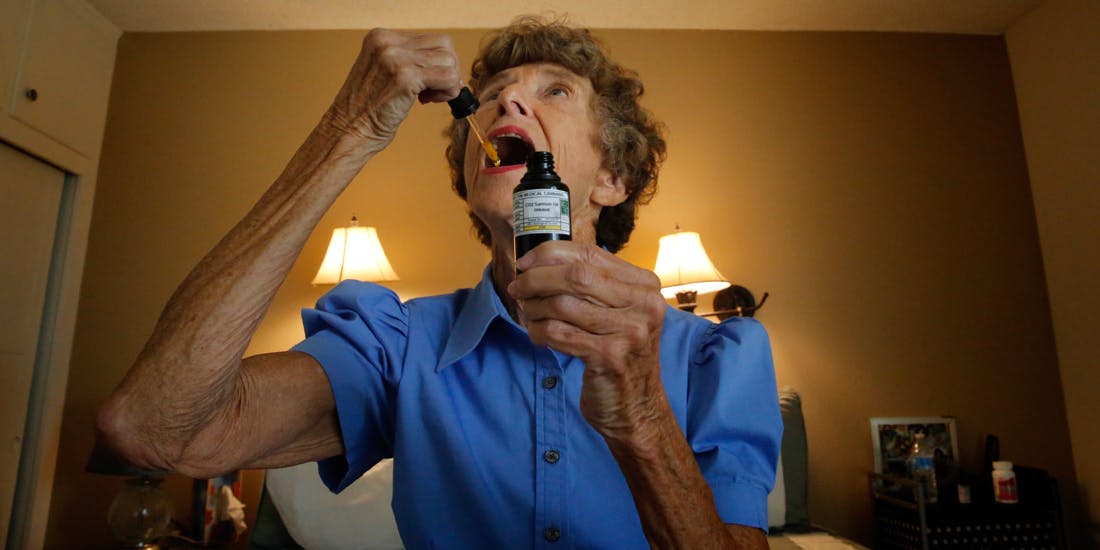 OCTOBER 14, 2014. LAGUNA WOODS, CA. Pat McClintock, age 85, takes drops of marijuana oil in her Laguna Woods,CA, home to help relieve chronic back pain. She said acupuncture, cortisone shots and chiropractic adjustments weren’t enough. Now she can walk fartherr than she could before trying it. She gets the drops from the medical marijuana collective in the retirement community. While growing up in Texas and raising a family in Wyoming, McClintock said she nerer had the temptation to smoke pot early in life. (Photo by Don Bartletti/Los Angeles Times via Getty Images)

The Best Types Of Medical Marijuana To Treat Fibromyalgia

No one should have to live with widespread pain and chronic fatigue.

Those experiencing the chronic pain of fibromyalgia are increasingly turning away from potentially dangerous and addictive opioids, and towards cannabis as a safer, more effective treatment option. But cannabis is a diverse medicine, and it’s important to first educate yourself on potential methods of ingestion when treating fibromyalgia.

Many now believe that edibles are the best option for treating chronic pain disorders like fibromyalgia. This is largely because edibles provide a much stronger and longer lasting effect. This means that medical marijuana patients with fibromyalgia don’t have to consume cannabis as often to maintain the medicinal effects they’re experiencing. Another reason why edibles are often preferred simply have to do with the dosing method. Put simply, edibles are discrete, whereas smoking emits a pungent aroma that can cling to one’s skin, clothing and breath.

If you’re looking to use medical marijuana to treat fibromyalgia, all of the following ingestion methods offer unique benefits:

Edibles are typically made with cannabutter, which is a form of butter that has been infused with marijuana by simmering the two products in a pot together over a number of hours. While edibles are often delicious and highly effective, they can also make dosing somewhat difficult. Most people who have consumed edibles a few times can tell you a story about when they ate too much. While it’s impossible to overdose on marijuana, taking too much can lead to vomiting, headaches, nausea and an overall terrible experience. The upside of edibles is that the effects of marijuana last much longer than when it’s smoked, which is helpful for those experiencing the chronic pain of fibromyalgia. If you’re interested in using edibles to treat fibromyalgia, it’s recommended that you start off by trying small doses of edibles and working your way up according to your experience.

Tinctures are cannabis extracts that are made using alcohol, so beware of their strong taste. They typically come in small bottles with droppers that can be used to add the medicine to one’s food or beverages. This is the main advantage of tinctures. Rather than pre-making edibles, where you have to eat a specifically-made food product to reap the medicinal effects, tinctures can be added to a cup of tea, a glass of juice, or even dropped onto one’s dinner. Rather than eating a brownie, which can be a little awkward to eat in the early morning hours, if you feel the onset of fibromyalgia associated pain, you can simply add a few drops of tincture to your morning coffee. Tinctures can also last for years if stored in a dark and cool environment.

CBD is short-form for cannabidiol, which is a cannabinoid found in marijuana that helps to treat chronic pain. The main benefit of CBD is that it doesn’t produce the psychoactive effects of THC. In other words, taking CBD alone won’t make you feel “high.” This is a great option for those suffering from fibromyalgia who don’t want to experience cannabis’ psychoactive effects but still need to treat their pain. However, many researchers now believe in something called “the entourage effect,” which essentially means that THC and CBD work best when used in concert, producing the greatest medicinal effects for patients with disorders like fibromyalgia.

Still, for young children, the elderly, or people who simply do not enjoy the effects of THC, CBD oil is a great option. CBD oils work like tinctures, except it’s recommended that you use the dropper to administer the oil directly under your tongue, rather than combining it with other foods or liquids.

Sublingual is just a fancy way of saying “under the tongue.” Like tinctures, sublingual sprays are typically made with alcohol and look similar to the sprays some people use to ward-off bad breath. Because these sprays are administered directly under the tongue, their medicinal properties are immediately absorbed into the bloodstream. This gives patients with fibromyalgia the advantage of immediacy, as well as discretion. Unlike tinctures, where it’s clear to observers that you’re adding medicine to your food or beverages if you’re in a public space and feel the onset of fibromyalgia associated pain, sublingual sprays allow medical marijuana patients to quickly spray medicine under their tongues without drawing unwanted attention.

Cannabis pills essentially work the same way as traditional edibles, although many pills infuse marijuana with coconut oil and soy lecithin rather than butter. Cannabis pills are a great option for those with fibromyalgia because they reduce many of the negative aspects of edibles. As I explained earlier, for example, it’s difficult to know how much of an edible to eat without going overboard. With a pill, though, your dosage is already pre-packaged. Just like edibles, cannabis pills will have a stronger and longer lasting effect than smoking marijuana. But they cut out the unnecessary calories associated with many edibles, like brownies. They’re also easy to consume in public, as they’re easily disguised as a Tylenol or vitamin. For fibromyalgia patients who enjoy the effects of edibles, but are concerned about dosages, calories or the intensive baking process, cannabis pills are an excellent choice.