Now Reading:learn | These are the rights you sacrifice when you smoke legal marijuana 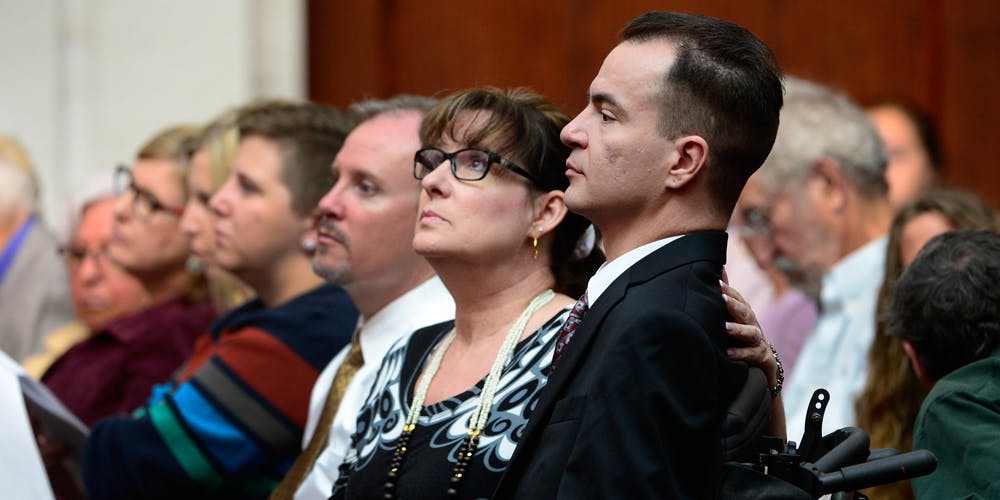 DENVER, CO – SEPTEMBER 30: Brandon Coats, right, waits for the proceedings to begin with his mother Donna Scharfenberg sitting by his side. The Colorado Supreme Court listens to arguments in the the case of Brandon Coats, a quadriplegic medical marijuana patient who was fired from his job at Dish Network after testing positive for marijuana. A written decision by the court will be issued at a later date. (Kathryn Scott Osler/The Denver Post via Getty Images)

These are the rights you sacrifice when you smoke legal marijuana

Legalization always sounded so good. Like some future promised land where all paranoia would fade away and everyone could spark one in the street without turning a single head. There would be budtenders on every corner dispensing your choice of strain like it’s candy (and in some cases it is). The law would finally be on our side. That was the dream, but in reality, we’re still a long way off from paradise. Unfortunately, smoking legal weed still means that we have to sacrifice some major rights and freedoms we’ve come to take for granted.

Your right to Employment.

This is probably one you are already familiar with. Employers have been giving marijuana smokers a hard time long enough to match the legendary rivalry between cats and dogs. As it turns out, making it legal hasn’t changed that.

Unfortunately, this is an area where the law has consistently come down on the side of the employer. Even when it’s been made legal in your state. Of course, it’s often a terrible idea to show up to work intoxicated, but even for medical patients who consume cannabis on their own time, the law can get them fired for taking that medicine.

To be more specific, it’s the federal law and the Controlled Substances Act which allows employers to fire their workers for something they do on their own time (In fact, you’ll find that the federal law will get in the way for most of the categories on this list).

As legal marijuana is a relatively new thing, there aren’t many cases we can point to, but the most well-known case of an employee being fired for using legal cannabis is perhaps Coats v. Dish Network. The 2015 case was filed by Brandon Coats of Colorado because the satellite company fired him for testing positive on his drug test despite not having smoked on the job.

Coats was a quadriplegic and took cannabis for severe muscle spasms, but the Colorado Supreme Court still sided with Dish in this case because cannabis is still illegal federally and that federal ban allows employers to fire or even not hire someone for testing positive for an illegal substance.

This is the case in most states, but still, it’s always a good idea to get familiar with your local laws. For example, states like Arizona and Minnesota, where medical cannabis is legal, prevent an employer from firing medical license holders so long as they don’t consume cannabis at work.

Your right to travel.

Travel is tricky. Mostly because it’s not always the destination, but the borders between states that can get you in trouble. Even if you’re crossing from one legal state to another, the border between states is technically a federal boundary, which means that transporting cannabis across state lines violates federal laws against transporting what the government considers controlled substances. Cannabis remains in the highest category on that list.

As a result, a first offense can land you up to five years in federal prison, while a second will double that sentence. In practice, it’s not likely that a DEA or any other law enforcement have the resources to check every person crossing a state border, so there are certainly cases in which someone has brought marijuana from one state to another without being caught. But the risk and ridiculous punishment are still there.

Where you’re far more likely to be caught is at an international border crossing, where you’re guaranteed to be checked by federal law enforcement. Which is why Customs and Border Protection’s tips on what to do if you’re a medical marijuana patient mostly amount to leaving your stash at home and traveling to someplace where it can be purchased legally.

Yet even within legal states, the federal law isn’t the only thing stopping you from transporting your weed. In Oregon for example, state law prohibits the export or import of marijuana even though it’s perfectly legal to purchase and possess it for recreational purposes within the state. The fines in this case depend on the amount that is being transported, but could range anywhere from $260 for an ounce to $125,000 and a felony charge for 16 or more.

In Nevada, bringing cannabis in from out of state could land you in prison for up to 10 years and California’s new legalization law prevents you from taking cannabis across state lines even if the state has licensed you to transport it. And it’s all based on the fact that it’s still federally illegal, which forced the states to implement these rules so that federal law enforcement would leave them alone.

Your right to bear arms

The Second Amendment gives every American the right to own a gun, and more often than not, there doesn’t seem to be much that can get in the way of this right. But according to a federal law known as the Gun Control Act, certain categories of people are unable to purchase or transport firearms. Those include anyone who is “an unlawful user of or addicted to any controlled substance” (in this case cannabis). In the eyes of the government, you’re just as unfit to own a gun as “a mental defective” or an “illegal alien”.

Under the regulations of the Bureau of Alcohol, Tobacco, Firearms and Explosives, gun owners who purchase from a federally registered retailer have to fill out Form 4473. That form asks a series of questions which could disqualify you from purchasing a gun, one of which is:

“Are you an unlawful user of, or addicted to, marijuana or any depressant, stimulant, narcotic drug, or any other controlled substance?”

The catch is that answering that question with a lie is considered perjury, and would be a felony crime.

It’s a law that’s rarely implemented for illegal users of marijuana because gun shop owners have no way of knowing whether you enjoy the herb on your spare time unless you fill out that part of the form. But when you become a card-carrying cannabis user, it only takes a bit of background work for the retailer to find out.

In one case from 2011, medical cannabis patient S. Rowan Wilson challenged the federal law after a gun store owner refused to sell to her. Her case dragged on into 2016 when it was taken as far a the 9th Circuit Court of Appeals. The court ruled against her finding that since marijuana was still federally illegal and since the regulations were established by a federal agency it did not violate the Second Amendment.

But a federally registered gun dealer is not your only option. Depending on which state you live in, the so-called “Gun Show Loophole” could allow you to buy a firearm from an unlicensed seller. Just keep in mind that possessing that gun would still be illegal.

Your freedom to be a parent

This one is a little more loosely defined because of the lack of data on how legal marijuana use effects custody battles and child protective services disputes. What little we do know from the cases which have been brought to court say that enjoying a bit a cannabis will not play in your favor.

Among the most widely known cases are that of a Colorado father who lost custody of his children because he possessed a medical marijuana card, and another case in which police showed up at the door of a New Jersey mother whose child spoke about the hemp his mother was growing at home. Luckily, neither of these cases resulted in the parent losing custody of their child. But as a result of very little hard data on the issue, divorce and custody lawyers believe it’s really in the hands of the judge who could either be sympathetic to your case or see you as a raving dope fiend.

In 2010, a Colorado father was ordered to take a urinalysis test each time he visited with his daughter, but the state’s Court of Appeals overturned that decision on the grounds that what the father did when he was not with his child was irrelevant to the case.

Although the rulings in each of these cases favored the parents, it’s worth noting that someone who drinks an obscene amount of coffee would not have ended up in court in the first place. The truth is cannabis is still stigmatized even in places where it’s legal and especially when children are involved.

The issue has become so controversial it spawned debates in Colorado over whether cannabis in the home is a danger to children. Yet because of the lack of data available and extremely polarized opinions, that debate got so complicated the state’s legislature decided to drop the matter altogether and return to it at a later time—leaving parents who need or enjoy cannabis in legal limbo.