Now Reading:culture | Are These Cannabis Vending Machines The Future Of Buying Weed? 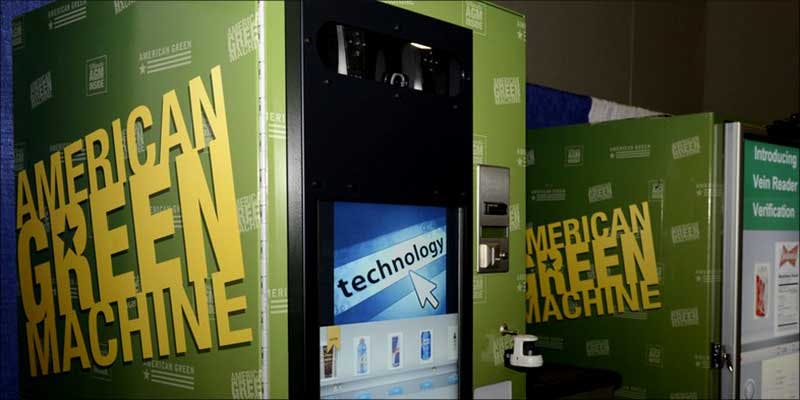 Are These Cannabis Vending Machines The Future Of Buying Weed?

Soon, you’ll be able to buy your munchies, cigarettes, and weed from a vending machine, if American Green has anything to do it with.

Soon, you’ll be able to buy your munchies, cigarettes, and weed from a vending machine, if American Green has anything to do it with.

Cannabis vending machines are about to get even smarter

Although vending machines have always been a way to get a quick way to get a soda or snack, the next generation of machines will offer much more than a sugar rush, as there is a new type that will dispense the likes of alcohol, casino chips and, yes, weed.

Of course, the fact that cannabis being available in vending machines in some states is nothing new, as long as you have a valid medical card. But the new technology behind the next generation of vending machines could see it widespread – where the laws allow, that is.

Yes, the vending machine as we know it is about to change, making for age-restricted items – such as weed, cigarettes and alcohol – available in areas that are permitted, meaning it’s just as easy to get your fix of THC, beer, and nicotine, as it is to get your hit of sugar.

That is coming by way of biometric vending machines, which have been developed by American Green, allowing for fingerprint identification to verify a person’s age.

The vending machine that was called the ZaZZZ. underwent a rebranding to become “The American Green Machine,” which requires the user to have a medical marijuana card and driver’s license (and it is only being operated primarily in medical states).

How does it know?

It all starts with an app, like so many things in modern day society, where customers will create a profile. Once done, you can log in near a machine and a QR code will pop up, which allows the customer to gain use of the machine.

Again, it’s not just weed that will help the machines flourish, as the age-recognition aspect opens up the sale of cigarettes and alcohol, too. That feature was singled out by the Chairman and Acting President of American Green, David Gwyther, who said,

A baseball fan could buy a beer at the game in New York and cannabis from a dispensary in California the next day through the same app utilizing their verified account. This is a huge step forward for smart retail and the automated sale of regulated products.

So, even though the tech was already there, it seems American Green was waiting for the right time to introduce this app-based security system to its line of vending machines.

The adoption of smart phones, familiarity with apps on those phones and improvement in related vending technologies have now merged with a concept that the public could easily grasp before but are much more prepared to use now. – Gwyther

But just when will you be seeing these vending machines? Well, American Green hopes to eventually have the machines in all legal states, soon.