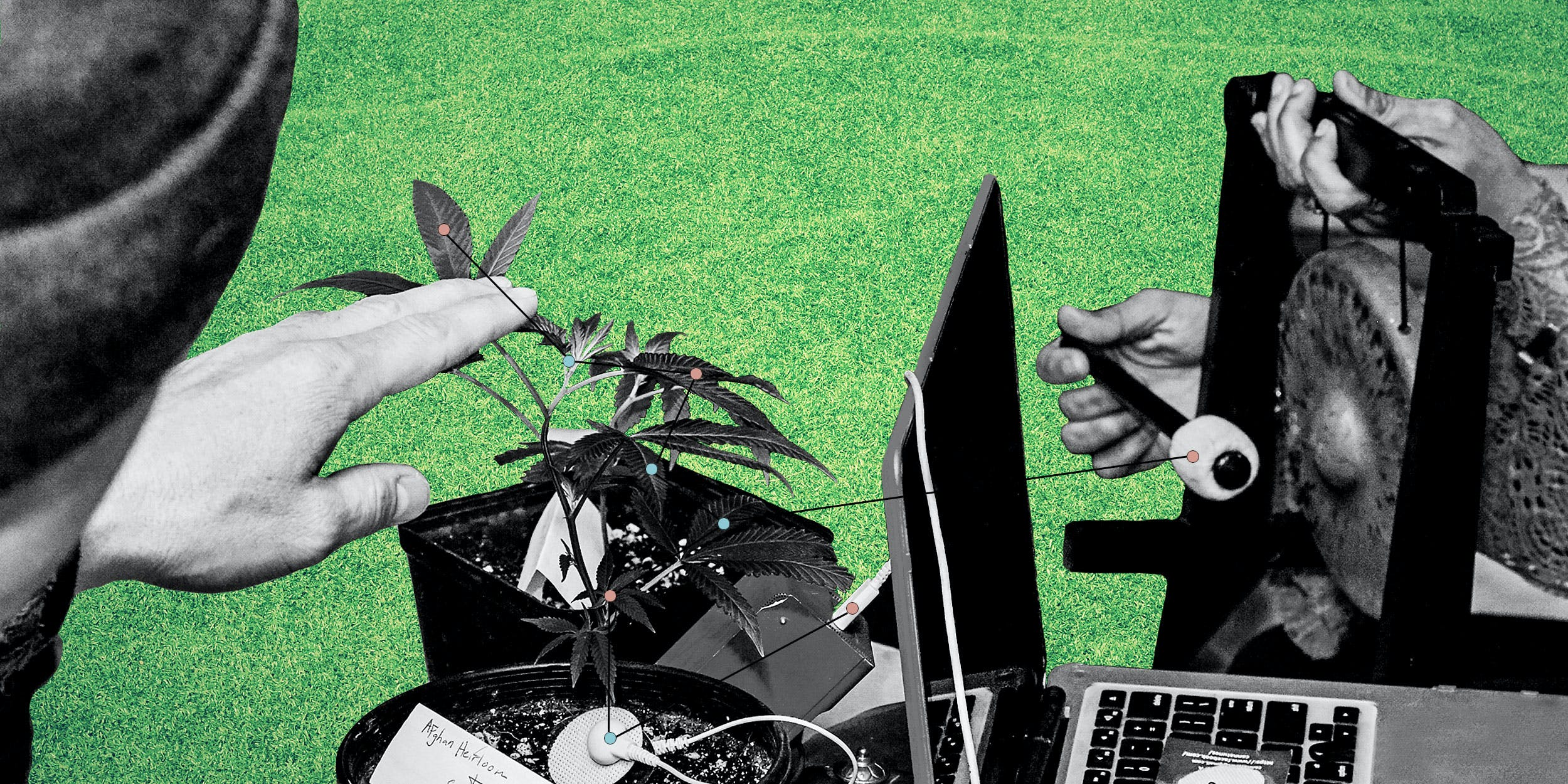 Each strain has its own unique song which can be discovered and recorded using an EKG device.

Shamanic wisdom, according to anthropologist Jeremy Narby, deems the spirits of nature to be melodies, each plant vibrating out its own tune. “The work of the shaman,” he says in Intelligence in Nature, “is to pick up the given melodies of each species.”

A disciple of Narby’s, Loretta Maps Bolt lives by this philosophy. The 34-year-old modern-day shaman from Philadelphia creates musical profiles of cannabis strains to make the consciousness of each one audible. She calls her work a new form of “acoustic ecology” and describes her enterprise Cannatunes as a “multisensory, multimedia project that works to create deeper connections with cannabis by exploring its ability to communicate its own consciousness and healing spirit.”

Nevermind the flowery rhetoric, Cannatunes, at its core, seeks to be a scientific venture uncovering the unique song, and thus consciousness, of each pot plant. Just as mushroom spores can communicate with trees miles away to let them know a disease is coming through the soil, Bolt explains, cannabis and all other plants are able to transmit electrical impulses through their root systems and into the soil, lending to a vast communicatory system with their peers of all different species.

Bolt, an expert in biodynamic farming with a degree in environmental law, hooks an electrocardiogram or EKG device—like the one used to monitor a patient’s heart rhythm—to the fan leaves or stem of the pot plant to read its electrical signals. These electrical signals correspond with different frequencies on the Hertz Scale and thus different notes. Recording a plant’s music can take anywhere from a few hours to a few weeks, depending on how quickly the plant starts communicating.

The plants don’t have brains, just an electrical system, says Bolt. “But in essence they are brains, these plants are making conscious decisions to communicate or not communicate with each other and the environment around them.”

Cannatunes’ raison d’être goes beyond orchestrating whimsical weed melodies; it has a practical purpose too. For cannabis cultivators, Cannatunes can be used as a diagnostic tool to determine the health and happiness of a plant.

“When plants are happy and healthy, their music is complex, consistent, and on beat, but when they’re not happy or health, their music is discordant and off tempo,” Bolt says. Outdoor grown cannabis plants, for example, tend to produce more complex melodies while those grown indoors tend to be more monotonous.

Meanwhile, for consumers, a strain’s soundscape can help them determine its characteristics and personality. Sativas, for instance, tend to be high tempo whereas indicas tend to have lower tones and slower melodies. “I really want consumers to be able to use the music as a way to choose their cannabis,” says Bolt. Whereas now, consumers might choose their bud based on how it smells, she’s hoping to eventually provide dispensaries with Cannatunes installations to add a dimension of sound to their selection process as well.

Additionally, Cannatunes aims to create a new platform for wellness. Working with sound healers, Bolt puts on Cannatunes presentations for individuals and groups of people to heal them with the soundscapes produced by cannabis.

It may seem far-fetched, but Bolt isn’t the only one doing something like it. Teresa Helgeson, sound healer, reiki master, and certified hypnotherapist, is currently conducting a study with biochemist Dr. Glen Rein looking at the potential of plant soundscapes to lower cholesterol. A few patients already suffering from Rouleau saw their white or red blood cells actively begin to de-clump following just three plant music sessions, she says.

Helgeson already works with plant-generated music to heal clients from a variety of emotional or physical ailments. She recounts one case, for example, in which a patient with upper respiratory problems, ready to get adenoid surgery, listened to the sounds of an echinacea plant every night while he slept and was able to circumvent surgery altogether.

In her own research, Helgeson has also worked to uncover plant consciousness beyond basic human comprehension. Plants, she says, play different melodies depending on their audience.

“Somehow the plants are able to customize the music every time they’re in front of the person to fit that person’s needs,” she says.

Different sounds correspond to different frequencies on the Hertz scale which measures electromagnetic waves, explains Maggie Wilson, cannabis sommelier and reiki practitioner. Different frequencies have different healing vibrations. Wilson herself works with a seven-note annotation scale called the Solfeggio Scale, sound frequencies used in ancient Gregorian chants. Each note corresponds to a different objective: 174 Hz, for instance, is one of the lowest tones, meant to be a natural anesthetic.

In her Cannatunes presentations, Bolt also allows visitors to interact with the plants through touch. She says the plants respond by changing their tones and melodies based on who’s touching it. She calls the experience an “interspecies collaboration” between plants and humans and hopes that, one day, large numbers of people will not only be healed by consuming cannabis, but by listening to it too.

“I want to create a paradigm where people are talking through music to plants and plants are responding back to them,” says Bolt. “There’s always been this idea that technology is constantly separating us from nature, but I’m trying to use technology to create deeper connections with the earth.”