Now Reading:culture | A California church ran an ad with Jesus ripping a bong 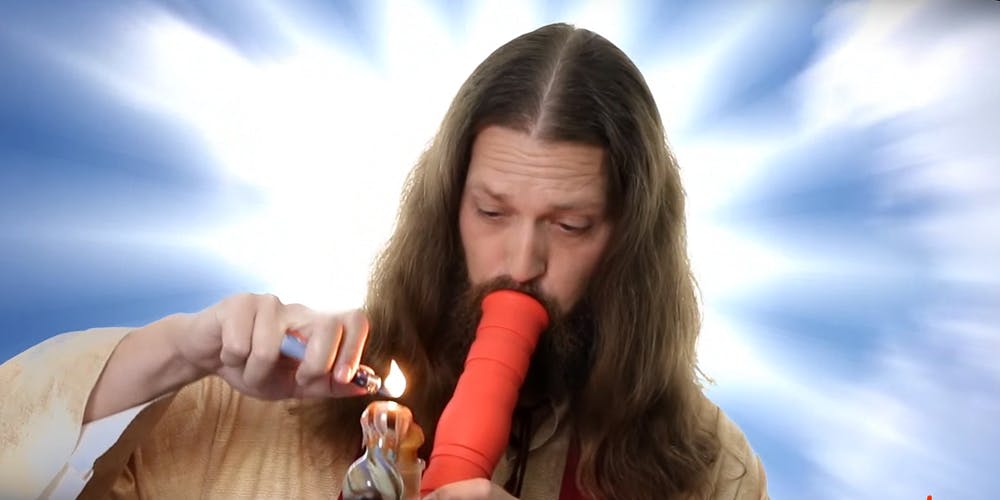 Photo of Courtesy of Coachella Valley Church via Youtube

A California church ran an ad with Jesus ripping a bong

“Our sacrament here is cannabis…ganja, wacky tobaccy, also known as marijuana,” says a man dressed like Jesus in the church’s promotional video.

Scripture isn’t the only paper being passed around at San Jose’s Coachella Valley Church.
While they maintain an untaxed non-profit status, like most churches, this one has been selling weed to its congregation. The Coachella Valley Church also allows its followers to smoke on the premises in their search for higher powers.

“It helps me to clarify my own mind, to get to my sense of purpose and start living my truth,” said Grant Atwell to The Mercury News. “The majority of adults have come across [cannabis] in their lifetime. However, we have to use it appropriately, in a good way for medical and sacred ceremony.” Atwell leads some of the church’s sermons. He also happens to be the father of Captain America actress Hayley Atwell.

Of course, religious freedom is not a license to sell weed. And even when the recreational marijuana market opens in California in 2018, dispensaries will need to have licenses granted by their city and the state to operate.

San Jose’s city council is currently looking to cease Coachella Valley Church’s operations. “It’s a priority for me,” said San Jose Councilwoman Devora Davis, “so I will be doing everything I can to shut down illegal pot clubs, regardless of whether they call themselves churches or not.”

The city of San Jose is also investigating a second church, Oklevueha Native American Church, which is acting as an unlicensed dispensary. The Coachella Valley Church has just been getting extra attention because of their promotional tactics, which in the face of their scrutiny border on the sin of pride.

The organization introduces themselves in a video titled ‘Welcome to Coachella Valley Church.’ It’s led by a man dressed like Jesus, waving around and hitting his bong, looking uncannily like the rebranded ‘Buddy Christ’ from Dogma.

“Our sacrament here is cannabis,” says smokey Jesus, “ganja, wacky tobaccy, also known as marijuana. Rastafarians have been using cannabis for quite some time to get in contact with me.”

After smoking, Jesus takes a call from a stoned worshiper, who chuckles like Beavis on the other end of the line. While the promotional video claims the Coachella Valley Church is ‘Rastafarian,’ they at no point mention a recognition of Haile Selassie as a messiah, the core tenant of Rastafarianism. They do talk, however, about smoking a bunch of weed.